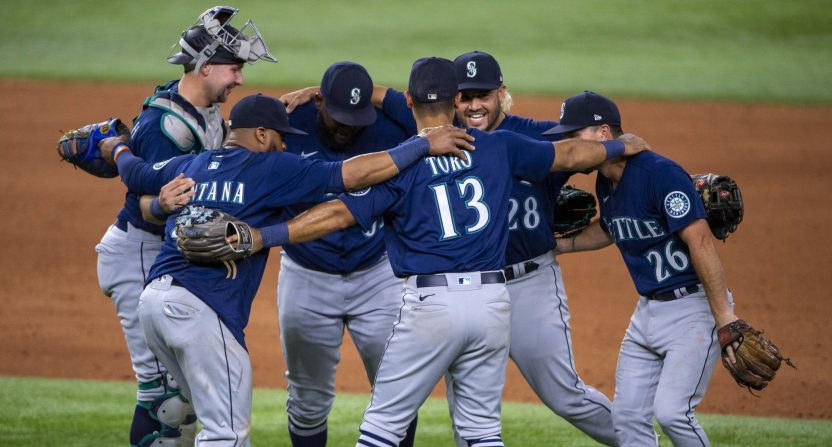 Trailing 5-1 to the Texas Rangers after six innings on Thursday, it appeared as though the Seattle Mariners win streak would end at 10 games. Those appearances were deceiving.

Eugenio Suárez came up with the bases loaded and two outs in the seventh inning and cut the deficit in half with a two-run single.

It is now a 2-run ballgame in Arlington. pic.twitter.com/YzxiPFVhCV

Seattle still trailed 5-3 in the eighth inning but again loaded the bases. Julio Rodríguez was hit by a pitch to trim the Texas lead to 5-4.

Ty France then delivered a two-out single of his own to put the Mariners up 6-5.

Who else but Ty 🇫🇷

The @Mariners come back to take the 6-5 lead in the top of the 8th! pic.twitter.com/fS8GaAA0oK

Texas went down in order in the bottom of the eighth inning. The Rangers threatened in the ninth inning when Marcus Semien hit an infield single and got to second base on a throwing error. Seattle then elected to walk Corey Seager, putting the go-ahead run on base.

But Diego Castillo got Adolis García to fly out to end the game.

Everything is bigger in Texas, including the winning streaks 🤠 pic.twitter.com/VbMiW8HobY

The 11-game streak is the second-longest in the history of the franchise, trailing only a 15-game winning streak that came in 2001, a season where the Mariners won 116 games, tying the MLB record.

And this wasn’t a run-of-the-mill win, either. While we’ve seen more improbable victories this season, there was little reason to think that the Mariners would come back to win this one.

When the game was over, baseball fans were effusive in their praise of the Mariners.

What a Comeback!
11 Straight Wins
This team is on fire 🔥
6-5 @Mariners pic.twitter.com/Oy9cptxXaM

The Mariners are inevitable

OMG THE @mariners are winning!!!

Me: “A couple of times. The other team.”

Mariners winning after their starter allowed 11 hits is proof they cannot be stopped pic.twitter.com/d7dAzLk2xJ

11 in a row! Starting to feel magical, @Mariners!

The win streak has been great for Seattle’s playoff odds. Following Thursday’s win, the Mariners occupied the second American League Wild Card spot. Seattle was 37-42 before the streak began and was 29-39 on June 19 after losing to the Los Angeles Angels.

In not even one full month, a lot has changed.