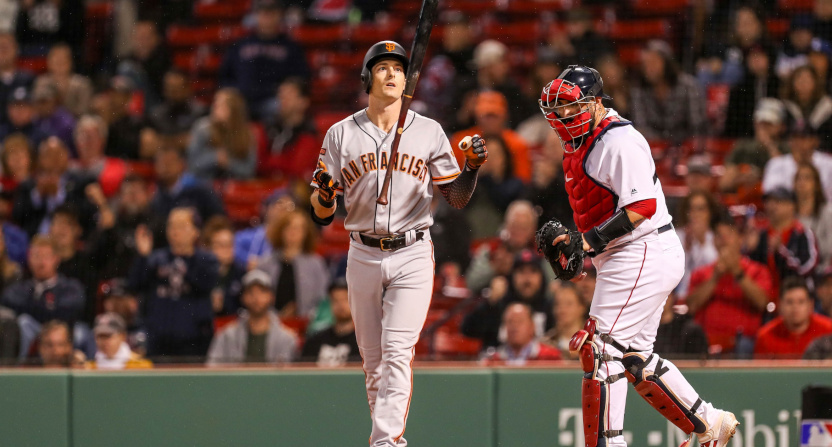 A whole lot of remarkable things happened in the San Francisco Giants’ 7-6 15-inning win over the Boston Red Sox Tuesday night, but one of the biggest came from the play of outfielder Mike Yastrzemski. Yastrzemski’s grandfather Carl spent his entire 23-year MLB career with the Red Sox, playing left field (the same position Mike plays) there from 1961-83 (the most games one MLB player ever played for one team) and recording 3,419 hits and 452 home runs. And the two Yastrzemskis reunited on the field ahead of the game:

Then, Yastrzemski launched this home run in the top of the fourth:

There was a lot that went into this happening. While there are plenty of famous relatives who wind up in the majors, that’s not a guarantee at all. In fact, Carl’s son and Mike’s father Carl Michael was a promising player himself at Florida State and was picked in the third round of the 1984 MLB draft by the Braves, and made it as high as Triple A with the White Sox, but never managed to crack the majors. Carl Michael was an important coach for his son before he passed away at 44 in 2004 following complications from hip surgery, but that led to some ensuing tensions, as he reportedly assumed his father’s identity in the last few years of his life and ran up thousands in debt.

Meanwhile, Mike Yastrzemski didn’t seem all that likely to get to the majors himself. He played at Vanderbilt and did well there and was ultimately selected by the Orioles in the 13th round of the 2013 draft, but while he posted some solid minor league numbers, he also battled injuries. And with him turning 29 this season, the clock seemed to be ticking. But he got an invite to Orioles’ training camp, showed some flashes there, and then the Giants traded for him in March and assigned him to triple A; he impressed there and was promoted to the majors in May, and has batted .265/.324/.509 at the big-league level this season. And this homer was his 20th of the year, and a pretty special one, especially considering that the Giants and Red Sox only play every three years these days. MLB.com’s Jessica Camerato got some great quotes from both Yastrzemskis:

“I think the only way that I can compare it to anything would be if I compared it to the ’67 season,” Carl said. “That’s what it means to me and being here. It’ll be the first time that ‘Yastrzemski’ will be announced on the field since ’83.”

“When I turned 23, kind of the big shocking moment was that for my entire life, he had showed up to Fenway Park every day,” Mike said. “That kind of blew my mind, where I was like, ‘I can’t picture 23 years’ worth of Major League Baseball experience.’ That’s when that really set in. But I was probably in high school when I started to see the magnitude of his effect on the city.”

…“I need to allow myself to enjoy it and take it in myself and say, ‘This is special,’” Mike said. “And it’s not just special for me — for everyone who had ever seen my grandfather play and has been a Red Sox fan over history.”

…“I got to walk in here by myself when I got to the field,” Mike said. “There was a lot of memories of being in the stands. Being in the stands for the World Series, being in the stands for the ’99 Home Run Derby, the All-Star Game, being with family at games. Those things overwhelm you more than actually playing here. The playing here is cool and I see it as part of my job, something I’ve always wanted to do. So that doesn’t really overwhelm me. But being able to do it in a setting where I have so many fond memories with friends, family, and then having them be able to be here is special.”

However, that was far from all that happened here. The game stretched on for 15 innings, including with both teams scoring in the 13th, before the Giants put a run across in the 15th thanks to a ground-rule double from Donovan Solano, a wild pitch by pitcher Trevor Kelley, and then a sacrifice fly from Alex Dickerson. And in the bottom of the 15th, San Francisco center fielder Kevin Pillar made a great diving catch:

That helped preserve the win for Giants’ reliever Dereck Rodriguez, who has quite the family history himself; his father is Hall of Famer Ivan Rodriguez. So that adds to all the family history Tuesday, which also included the Blue Jays’ Cavan Biggio (son of Craig) becoming part of just the second father-son duo to ever hit for the cycle in MLB. And that win made history in its own right, as it was the team’s first-ever regular season win against the Red Sox at Fenway. (Oh, and this was MLB career win 1,999 for San Francisco manager Bruce Bochy, who’s retiring after the season.)

The Giants were 8-15 against the Red Sox all time heading into this one, and 5-11 over the last 15 years, with all of those wins coming at home. Their last win against the Red Sox at Fenway came in the 1912 World Series while they were still the New York Giants, and their last win of any kind at Fenway came in 1915 (against the Boston Braves, who were playing some games there then). So it’s remarkable to see them make some history here, and for Carl Yastrzemski’s grandson to play such a big role in that.