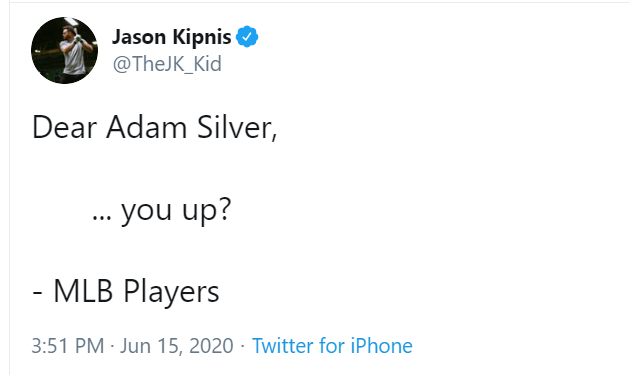 Just one week after saying he’s “100%” sure in a 2020 Major League Baseball season happening, MLB commissioner Rob Manfred told ESPN’s Mike Greenberg on Monday’s The Return of Sports special that he’s now “not confident” in a 2020 season.

Rob Manfred did go forward with his interview with Mike Greenberg on ESPN’s The Return of Sports special. Said optics are “just a disaster for our game”. pic.twitter.com/2dBm74eOsk

Major League Baseball commissioner Rob Manfred told ESPN on Monday he’s “not confident” there will be a 2020 baseball season and that “as long as there’s no dialogue” with the MLB Players Association, “that real risk is going to continue.”

“I’m not confident. I think there’s real risk; and as long as there’s no dialogue, that real risk is gonna continue,” Manfred said when asked if he was confident there would be a season.

“I had been hopeful that once we got to common ground on the idea that we were gonna pay the players’ full prorated salary, that we would get some cooperation in terms of proceeding under the agreement that we negotiated with the MLBPA on March 26,” Manfred told ESPN. “Unfortunately, over the weekend, while Tony Clark was declaring his desire to get back to work, the union’s top lawyer was out telling reporters, players and eventually getting back to owners that as soon as we issued a schedule — as they requested — they intended to file a grievance claiming they were entitled to an additional billion dollars. Obviously, that sort of bad-faith tactic makes it extremely difficult to move forward in these circumstances.”

Shortly after Manfred’s comments were made public, many MLB players took to Twitter to show their frustration.

First, we’ll start with the tweet from MLB Players Association Executive Director Tony Clark, who said that the players are “disgusted” over Manfred’s comments.

And now some of the many tweets from players:

Can we bring Bud Selig back?

Oh that’s weird cause a week ago you said there would be 100% chance of playing. Now the players tell you to implement the season you told/threatened us with it’s now our fault that there’s no dialogue? The players are ready and want to play. You made your bed now sleep in it Rob https://t.co/XLrMKHxsxG

So, Rob, explain to us how you can be 100% sure that there’s going to be baseball but not confident there will be baseball at the same time? hmmm. What changed between those statements 🤔🤔 Players told you to set the season, but it’s too early to set the season right now,

Every day somehow continues to get worse. MLB should be embarrassed… everyone involved. Im embarrassed. This is a joke

For the first time in my life, I’m embarrassed to be a professional baseball player. And I’ve made 7 outs in 4 at bats in 1 game before. This is worse.

These so called “negotiations” (or lack there of) have been sooo slimy, tone deaf, greedy, lying, leaking, and overall out of touch. This is not even close to what you dream of as a kid! Sorry to everyone for this playing out through the media during a pandemic. Brutal.

As my good friend @TheCUTCH22 would say…. lol.

What percent chance is it right now? https://t.co/im1oWc4rXu

“The return of sports” on @ESPN tonight should be great TV. 5/6 commissioners have their shit together.

Tell us when and where! We are ready!

Just a total mess for Manfred and MLB. Even if there’s actually a season played in 2020, the relationship between the players and the league figures to be in bad shape for a long while.