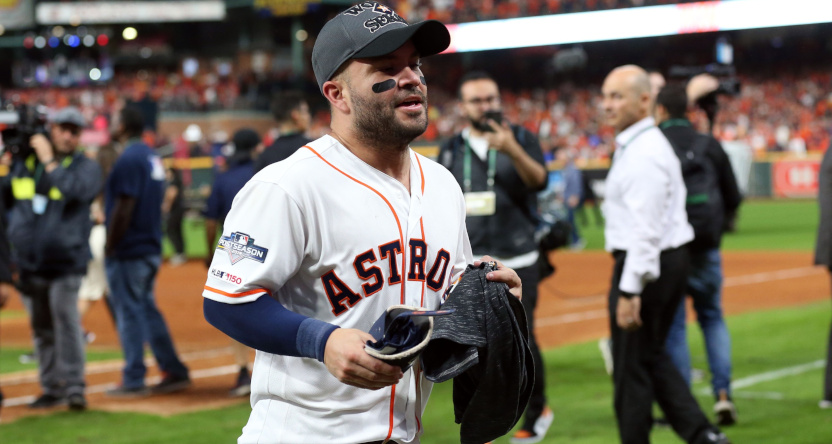 The MLB sign-stealing saga that started with the Houston Astros and has now led to the Boston Red Sox and New York Mets parting ways with managers Alex Cora and Carlos Beltran (over actions taken while with the Astros, but MLB is also looking into accusations the Red Sox stole signs) took some further twists Thursday. On the media side, ESPN analyst and Mets’ adviser Jessica Mendoza took a lot of flak for her criticisms (across ESPN properties) of former Astros’ pitcher Mike Fiers’ whistleblowing on this saga, and on the team side, the Mets announced they were parting ways with Beltran. But on the players’ side, things really heated up when it came to accusations of the Astros going beyond the infamous trash can and also using buzzers under batters’ jerseys to tip pitches to them. Those accusations really took flight when Jimmy “Jomboy” O’Brien passed along a tweet supposedly from Beltran’s niece and said it lined up with what he’d heard elsewhere:

Beltran's niece tweeting about the buzzers, which matches up with what Ive been told from about 5 different parties. pic.twitter.com/zla70bW0Wu

The Beltran family has disputed that the @S0_blessed1 account is anyone related to them (they haven’t yet weighed in on the other questionable seemingly-Beltran-linked account), and Gary Sheffield Jr., son of prominent former MLB player Gary Sheffield, stated that it’s another player:

The Beltrán family told me that this individual, who claims to be Carlos Beltrán's "niece", is not related to the family in any way. This person may or may not have additional information about the Houston Astros’ sign-stealing scandal, but they are not related to the Beltráns. https://t.co/2vTdiqGvl4

Meanwhile, David Brosius, son of U.S. national baseball team manager Scott Brosius, weighed in on this further on Reddit with allegations that his dad knew of the Astros’ cheating in 2017 (and, also, that Los Angeles Angels’ star Mike Trout takes HGH):

Scott Brosius’ son claims Mike Trout is on HGH for a thyroid condition. (From r/baseball) pic.twitter.com/BEAgDYy9Wg

And a whole lot of current players weighed in on the cheating allegations as well:

I’ve heard this from multiple parties too, for what it’s worth… https://t.co/zDlp0x4bKs

Best part is their fans still actin with the same pompous ass attitude those boys walked with, while taking millions of dollars from boys and jobs completely, staring at the camera, carrying a bat to first, maybe some don’t get it.But this is worse than steroids.

For the sake of the game I Hope this isn’t true.. if true, there needs to be major consequences to the players. That Completely ruins the integrity of the game!!!

And some specifically discussed Jose Altuve’s home run to win the decisive Game Six of the 2019 American League Championship Series (he’s seen after that above), after which he told Fox’s Ken Rosenthal that he didn’t want teammates to tear off his jersey because he was “too shy,” also claiming that the last time his jersey was torn off, “I got in trouble with my wife”:

Altuve making sure he keeps that jersey on (via r/nyyankees) pic.twitter.com/OO32FVFxTi

So, this is all a fun pile of stuff for MLB to deal with. But hey, at least they and their players have made it into the national conversation. Even, if like the last time they made major national headlines, it’s not exactly the way they wanted.