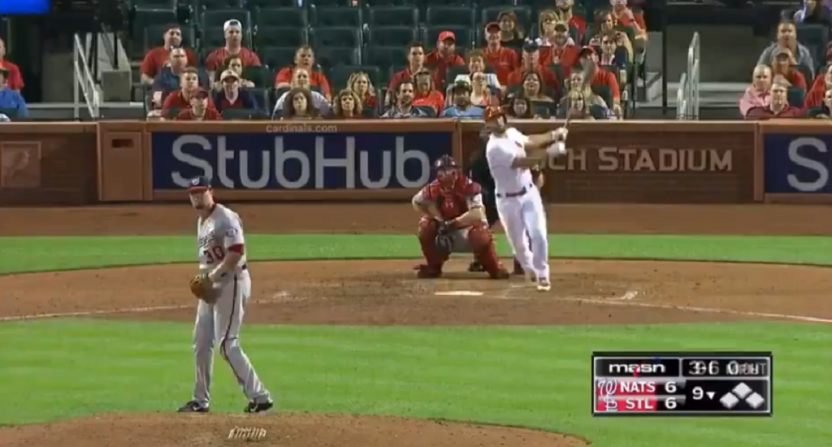 On Sunday night, the Washington Nationals took a 3-0 lead into the bottom of the ninth at Wrigley Field, only to lose 4-3 on a two-out, two-strike grand slam from Chicago Cubs rookie David Bote. It wasted a magnificent performance from Max Scherzer (7 IP, 3 H, 0 R, 0 BB, 11 K), and only added more disappointment to the most disappointing team in baseball this season. The Nats entered this season as huge NL East favorites, and were expected to win around 92-95 games.

Now, the Nats are 60-59, and seven games back of the Atlanta Braves in the NL East after another heartbreaking loss on Monday night in St. Louis. And again, the loss was thanks to the bullpen collapsing in the late innings.

The Nats took a 4-2 lead into the bottom of the eighth inning, and the Cardinals’ Jedd Gyorko led the inning off with a homer against Washington reliever Justin Miller.

Later in the inning, St. Louis had runners on second and third when MVP candidate Matt Carpenter stepped up to the plate vs Nats’ left-hander Sammy Solis. Predictably, Carpenter cranked his NL-leading 33rd homer, and MASN broadcasters Bob Carpenter (play-by-play) and Michael Morse (EDIT: not F.P. Santangelo as previously mentioned) gave it the Hawk Harrelson silent treatment. They were even silent for a bit *before* the home run, like they expected it to happen.

The Nats rallied in the top of the ninth and tied the game 6-6 against a St. Louis bullpen that has also had plenty of issues. But all it took was one batter in the bottom of the ninth for the Nats’ bullpen to blow it again. On a 3-1 count, Paul DeJong smoked a Koda Glover fastball over the left field wall for a walk-off homer. And again, there was plenty of silence from Bob Carpenter:

The Nationals' broadcast is amazing. pic.twitter.com/94pwznI5F7

The Nats' postgame show is very depressing. Ray Knight is having trouble even getting words out.

Ray Knight: "It just beats anything I've ever seen. Doggonit."

"This has been a messed up season."

"My mind is just going."

From the analysts to the players to the manager, I have never seen a more depressing postgame after a regular season loss than what I just saw on MASN. Nats are shook.

And first-year Washington manager Davey Martinez straight-up said, “I don’t know what else to do.”

Davey Martinez: "I don't know what else to do."

Nats’ elite reliever Sean Doolittle hasn’t pitched since early July due to a toe injury, and he still appears to be multiple weeks away from returning. The Nats traded for Kelvin Herrera in June, and he pitched poorly (4.76 ERA, 6.04 FIP) for Washington before landing on the disabled list with a shoulder injury last week.

So, all Martinez can really do is hope the healthy relievers start performing better, and they need to do so immediately. Seven games back in the division and six games back in the Wild Card race (behind several teams) is a very uphill climb with only a month and a half remaining in the season.