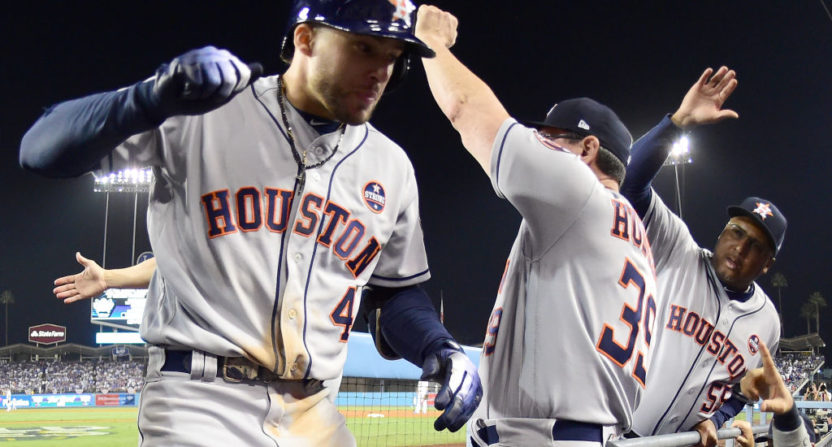 The winningest team in 2017 and the best offense in baseball gave us one of the wildest World Series games in MLB history on a hot Wednesday night in Los Angeles. George Springer, Jose Altuve, Carlos Correa and Marwin Gonzalez all hit home runs from the 9th inning to the 11th, tying the series at 1 apiece before traveling home to Houston for Game 3.

From the very first minute to the last, the Dodgers’ and Astros’ endearing character was put on display in an iconic game that no one is likely to forget. Los Angeles had all but sealed a 2-0 series start when Kanley Jansen jogged out of the bullpen for a six-out save. He blew the Dodgers’ lead by giving up a solo shot to Marwin Gonzalez that tied the game at 3 in the 9th. Ouch.

Astros’ closer Ken Giles hurled a 1-2-3 bottom of the 9th, and onto free postseason baseball we went. Altuve and Correa mashed back-to-back dingers off Josh Fields in the 10th and suddenly, the Astros claimed a 5-3 lead. But instead of making it easier for Giles to close out the game, he gave up a rally-sparking solo jack to none other than Yasiel Puig. Commence Puigseason baseball. Moments later, Enrique Hernandez lined an RBI single to right and tied the game at 5.

Springer, a perfect embodiment of the Astros’ never-give-up attitude, tattooed a monster go-ahead two-run home run off Brandon McCarthy for a 7-5 lead in the 11th. Houston was so close, it could taste the tied series.

Fans were on the edge of their seats in L.A., hoping a couple more big swings would deliver a walk-off win. Chris Devenski dealt a meatball over the plate to Charlie Culberson and the Dodgers’ dreams were alive for just a beat more. Devenski regained his composure and struck out Puig to end a game that reminded us why no other sport compares to baseball at its best.

This spirited Game 2 broke so many MLB records that people began to lose track.

The @Astros are the first team in MLB history to homer in the 9th, 10th and 11th inning of a postseason game.

8 HRs. Most home runs ever in a #WorldSeries game.

Marwin Gonzalez is the first player ever named “Marwin” to hit a home run in a World Series game. Just trying to keep up here.

Vin Scully’s rendition of the ceremonial first pitch could make even the fiercest of baseball critics crack a smile. The legendary broadcaster’s perfect delivery and whimsical nature kickstarted the Dodgers’ near-scripted night.

Beyond that, Corey Seager swung and in the next breath, he screamed. The 23-year-old once again showed off his clutch timing, connecting on a monster two-run home run that broke a 1-1 tie to give the Dodgers a 3-1 lead in the 6th.

In the battle of veteran starting pitchers, both Rich Hill and Justin Verlander delivered intense matchup after intense matchup. The Dodgers’ Hill punched out seven batters and gave up one run on three hits before analytically-driven Dodgers’ manager Dave Roberts pulled him after four frames. Astros’ workhorse Justin Verlander twirled a no-hitter into the 5th inning before giving up a solo homer to Joc Pederson, exiting soon after Seager’s go-ahead dinger.

Chris Taylor single handedly limited Houston’s attack in the 3rd with an incredible sliding attempt in centerfield. Taylor didn’t hesitate and shoved his glove in front of a looping liner. He merely grimaced as the ball glided off the brim of his hat. It missed his face by an inch. It eventually caromed into Pederson’s glove. The Astros only scored one run on that play, but they still had two more chances with the bases loaded. But Hill then completely depleted Houston’s rally on back-to-back strikeouts to Altuve, the Astros’ MVP favorite, and Correa to end the inning.

And there was much more craziness after that. Perhaps Springer put it best in his description of what Game 2 felt like when it was all said and done — “Up, down. Up, down. Up.”