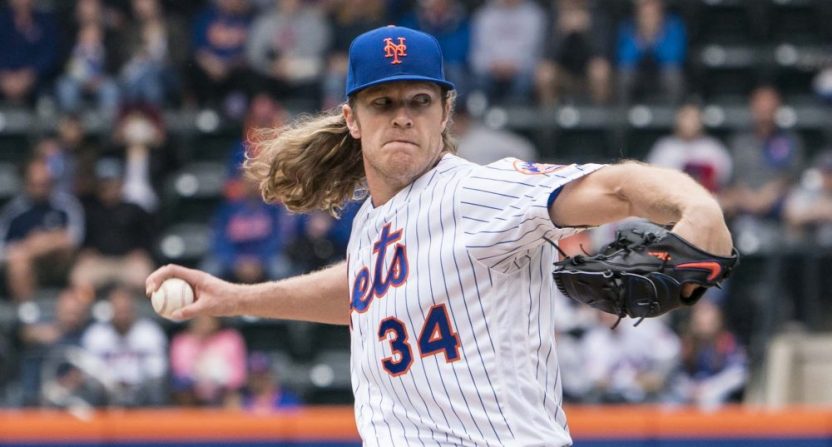 The New York Mets rotation took a huge hit on Tuesday when the club announced that starter Noah Syndergaard would be heading to the 10-day DL for the first time this season thanks to a strained ligament in his right index finger.

Noah Syndergaard was examined today at The Hospital for Special Surgery for soreness in his right index finger. A MRI and clinical examination confirmed a strained ligament in the finger. Syndergaard will be placed on the 10-Day Disabled List, retroactive to May 26.

The 25-year old could reportedly return quickly, though the fact that he’ll be in a splint can’t be the most encouraging news to Mets fans.

Sense is that Syndergaard could've kept pitching through this. (It's the index, not middle finger.) But Mets will give him some rest. He'll use a splint for a little, try for a bullpen this weekend, and if okay, perhaps return as soon as he's eligible next week vs. the Orioles.

The Mets are hanging out in fourth place in the NL East at 26-25, but are just four games back of the first place Atlanta Braves. But losing Syndergaard for an extended period of time could doom them – this season, Thor has a 3.06 ERA over 64 2/3 innings, striking out 76 and walking just 13. In terms of fWAR, he’s been the fourth-best starter in the NL this season, behind two-time reigning Cy Young winner Max Scherzer, teammate Jacob deGrom, and Aaron Nola of the Phillies.

Last year, Syndergaard made just seven starts after tearing his lat muscle at the end of April and missing nearly all of the rest of the season. When he went down, the Mets were “just” 10-13 on the season. They lost the game Syndergaard left early by a hideous 23-5 score, and ended up scuffling to a 70-92 start on the season.

Before Syndergaard got hurt, the Mets’ rotation was already in a precarious position. deGrom has been fantastic, but Matt Harvey was so bad that he was traded to the Reds earlier this month, Zack Wheeler has an ERA over 5.00 in nine starts, Steven Matz has been homer-prone (and somehow, hasn’t missed an extended period of time yet) and has gotten through the sixth inning just twice in nine starts, and Jason Vargas has an ERA over 10.00 in five starts.

The Mets are heading into a critical time of the season. 19 of their next 21 games take place against teams above .500 (including four with the Braves), and after an “easy” 14 games stretch that includes games with the Dodgers and surprising Pirates, they close with eight games against the Phillies and Nationals, two teams that (along with the aforementioned Braves) New York is looking up at in the NL East standings.

If Syndergaard will miss more than a start or two, Mets fans should get nervous, because his likely replacement in the rotation will be PJ Conlon, who has an 11.12 ERA in two starts in th emajors this season and a 6.58 ERA in eight AAA starts in 2018. The team could also shift either Robert Gsellman or Seth Lugo, who both spent most of last season in the rotation, into Syndergaard’s spot if needed, though that could damage their bullpen.