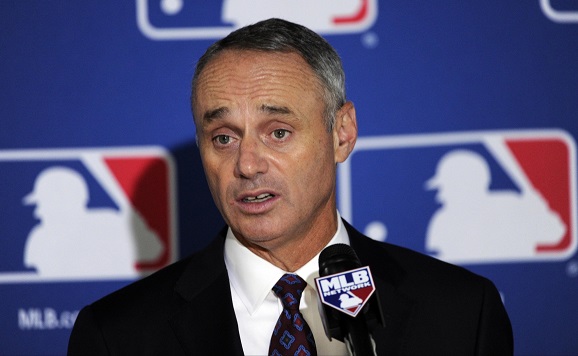 We’re not the first to say it and we’re not the last, but Major League Baseball commissioner Rob Manfred is very bad at all of this.

While the Houston Astros haven’t exactly handled their apologies very well, one would assume that MLB would want to send a very clear message that cheating to win a World Series is not something that will stand. You would assume the league would want to send a strong message of some kind, even if that message is largely ceremonial, such as stripping the franchise of their 2017 World Series title. You would assume the league would put the values of the rest of the teams ahead of the values of the Astros, who are unrepentant cheaters.

You would assume all of that but you would be wrong. Because Rob Manfred is not a normal person. Something is seriously off about this guy and, unfortunately, he’s in charge.

Manfred sat down with ESPN’s Karl Ravech over the weekend to discuss the Astros scandal, amongst other things. One of the major sticking points for a lot of people is that MLB hasn’t really punished the franchise to the level that seems acceptable given their rampant cheating tactics. Manford refutes that assessment by saying, basically, that the players seem bummed out about being caught and that’s punishment enough.

“Yeah, I understand. I understand people’s desire to have the players pay a price for what went on here,” Manfred said. “I think if you watch the players, watch their faces when they have to deal with this issue publicly, they have paid a price. To think they’re skipping down the road into spring training, happy, that’s just a mischaracterization of where we are. Having said that, the desire to have actual discipline imposed on them, I understand it and in a perfect world it would have happened. We ended up where we ended up in pursuit of really, I think, the most important goal of getting the facts and getting them out there for people to know it.”

What about taking the Astros’ World Series victory away from them, even as an asterisk in the record books? Wouldn’t that mean something given the value that MLB puts on the trophy given to the winner of the World Series every year? Apparently not, especially when you don’t think much of the trophy.

“The idea of an asterisk or asking for a piece of metal back seems like a futile act. People will always know that something was different about the 2017 season, and whether we made that decision right or wrong, we undertook a thorough investigation, and had the intestinal fortitude to share the results of that investigation, even when those results were not very pretty.”

The World Series Trophy is a “piece of metal” to the guy in charge of baseball. Cool. Though to be fair, it’s actual name is the Commissioner’s Trophy so perhaps this is some kind of self-effacing metaphor.

You could make a reasonable case in court that Rob Manfred hates baseball.

“Well, I think the owner has the ultimate responsibility for what goes on in his franchise,” Manfred said. “I mean, that goes back to the way we govern the game, right, I mean that the owner has that obligation. I think in this particular case, I was prepared, based on what the facts showed, to discipline an owner if I felt that was appropriate. I think when you discipline, you have to always rely on the evidence.

No word on whether or not Manfred has seen Jose Altuve’s “tattoo” but we imagine if asked he’d say, “well, there’s no proof that he doesn’t have one and there’s no way to know for sure.”

Since Manfred doesn’t seem too intent on punishing the Astros, one would imagine that other MLB teams plan to dish out their own punishment. The Unwritten Rules of Baseball dictate that a lot of Astros players are going to get a baseball in the arm while batting this season. On this issue, Manfred actually has a stance, and that stance is…you can’t do that.

“We have been working on for some time a memorandum about being hit by pitches, intentionally throwing at batters,” Manfred told ESPN’s Karl Ravech. “It’s really dangerous, really a dangerous undertaking, and completely independent of the Astros investigation we will be issuing at the beginning of this week a memorandum on hit by pitches which will increase the ramifications of that type of behavior.”