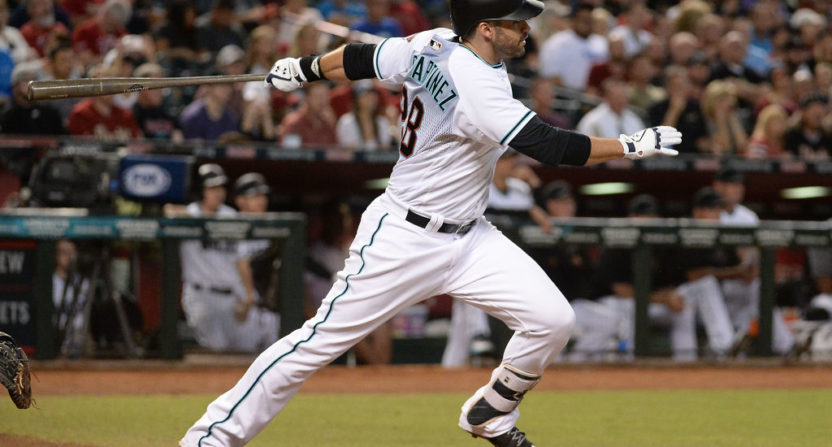 With MLB free agency on the horizon, we’re at the time of year where agents begin to leak demands of what their players will be seeking on the open market over the winter.

Arizona Diamondbacks outfielder JD Martinez is arguably the best hitter on the market, and super agent Scott Boras has his sights set high.

He wants a $200 million contract for Martinez, something that has been handed out just 12 times in baseball history.

Teams that have reached out early on J.D. Martinez have gotten the impression Scott Boras is looking for something in the $200 million range.

Stop laughing. It’s not funny. Boras actually has his sights set this high.

But…$200 million? For a corner outfielder (who isn’t exactly a good defender, mind you) that has had injury issues and is already in his 30s? Good luck with that, Boras.

It’s difficult to find a match for Martinez because of the financial flexibility needed to sign him and the need for it to be an AL team because of his inevitable move to designated hitter. The Angels were one of the AL’s worst offensive teams last season, but after they inked Justin Upton to an extension, there’s no fit for Martinez in their lineup or payroll. The Royals and Blue Jays joined the Angels in the bottom tier of AL offensive ineptitude, but both appear to be embarking on rebuilds. The Rays can’t afford him. He wouldn’t be a fit with the White Sox, already deeply immersed in a rebuild.

The best fit actually might be the Seattle Mariners – DH Nelson Cruz is a free agent after the 2018 season, the team is built to win now, they need offense in their outfield, and ownership showed they’ll back up the bank truck for an expensive free agent after the Robinson Cano signing following the 2013 season (which actually could be a deterrent to signing Martinez, but I digress).

Scott Boras usually takes care of his clients in the best way that he can, but I’m wondering if he misfired here. Martinez’s market was already going to be limited by his age and lack of defensive skill. He was going to command a massive amount of money this offseason anyway, but throwing out the $200 million figure likely knocked some more teams off the ledge.

Even worse for Boras is that some of the usual suspects won’t be bailing him out – the Nationals don’t seem like a fit, even after Jayson Werth’s contract expired. The Tigers wouldn’t bring Martinez back months after trading him to kick their rebuild up a notch. The Yankees are in the midst of a youth movement and have more pressing issues with their pitching staff. The Red Sox already have too many outfielders.

I don’t think Martinez is going to get cornered into accepting a one year deal with an option, like Jose Bautista did last winter, but I wouldn’t be at all surprised if his contract doesn’t even cross $100 million, let alone $200 million. One thing is for sure – it’s going to be an interesting offseason.