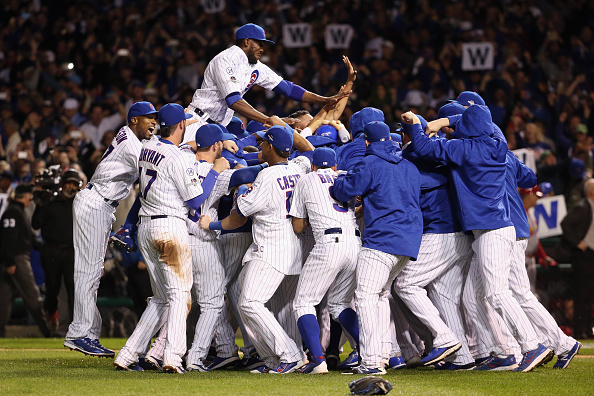 It’s that time of year – the Super Bowl is in the rear-view mirror, and Nevada casinos are starting to roll out their projected MLB win totals for the 2016 season. On Thursday, Atlantis Casino in Reno (typically the first casino to reveal the totals) unveiled the totals for degenerates like myself to scrutinize.

As usual, there are some delicious looking bets here. There are also some totals that you should run far, far away from.

Picking the best bets has been a tradition for me. As you might expect, my results have been mixed. In 2013, I went 5-2-1. In 2014, I went 5-3, though it could have been a lot better or a lot worse. Last season, I went 5-3-1, though one of those losses was betting the under on the World Champion Royals. Whoops.

I’ll make nine picks again this year, and like last season, I’ll group them into three categories – easy money, reasonably confident, and I’ve got a feeling. If history is any indication, I’ll whiff on a third of my picks and nail two-thirds of them. Here’s hoping for a better outcome in 2016.

Easy money
Baltimore Orioles UNDER 80.5 wins. Even if the Orioles end up signing Dexter Fowler and/or Yovani Gallardo in the coming days, I can’t see how they finish with a .500 record, which is what a bet of over 80.5 wins would indicate. Yes, Baltimore will have a full year of Matt Wieters behind the plate, but he’ll be 30 in May – there’s no guarantee that he’ll simply revert to his All-Star self now that he’s (presumably) healthy.

The Orioles are also counting on the boom or bust Mark Trumbo to improve their offense, which could work out OK if Trumbo is only going to DH every day and will never touch a glove ever again. Trumbo is a decent enough hitter, but all of those gains on offense can be negated by his absolutely horrendous defense. There’s also the rotation, where Wei-Yin Chen has been replaced by…Odrisamer Despaigne, I guess? A rotation of Chris Tillman, Ubaldo Jimenez, Miguel Gonzalez, Kevin Gausman, and Despaigne won’t exactly panic the AL East.

In short, the Orioles aren’t really better on paper heading into 2016 than they were in 2015, and as a whole, the AL East got stronger this offseason after a mediocre 2015 season. It would take a lot for the Orioles to finish .500, let alone make the Postseason – take the under to the bank.

Cincinnati Reds UNDER 71 wins. The Reds were terrible last season, going 64-98 and finishing last in the NL Central. They traded Aroldis Chapman and Todd Frazier this offseason, and will be without Marlon Byrd, Johnny Cueto, and Mike Leake for the full year after dealing them during the 2015 season. How will this team win 70 games in an NL Central that features three 2015 Postseason teams?

The only position I can see them improving upon in 2016 is catcher, where Devin Mesoraco is presumably healthy after logging just 51 plate appearances last season. After the trade deadline last year, the Reds went a pathetic 18-43, by far the worst mark in all of baseball. Now, imagine that 18-43 team without Chapman and Frazier, but with Mesoraco, maybe Homer Bailey in the second half, and a handful of middling prospects. This season could get ugly in a hurry.

Minnesota Twins OVER 77.5 wins. So, the 2015 Twins were a weird team – they stayed in the Postseason race until the final weekend of the regular season. They actually finished the year with a negative run differential, yet finished four games over .500. Based on that, you might expect some regression in 2016 from Minnesota. But consider this – the Twins are a young team, and one would expect their young talent to keep improving this season. They also won’t be wasting plate appearances on guys like Torii Hunter (who hit just .240/.293/.409 in 139 games) and Jordan Schafer (.217/.250/.261 in a month of action before being put out of his misery), instead letting players like Byron Buxton, Byung-ho Park, and Miguel Sano spread their wings and fly.

It’s also worth noting that the Twins have a legitimate backup catcher option this year in John Ryan Murphy (as opposed to Chris Herrman and Eric Fryer, who were…well, not good), and he’s arguably better than their starter, Kurt Suzuki. Throw in the fact that the mediocre Mike Pelfrey is gone from their rotation and they’ll have Ervin Santana for a full year, and Minnesota looks to be in a great place in 2016, despite an AL Central that looks like it’ll be a meat grinder.

Reasonably confident
Boston Red Sox OVER 85.5 wins. The BoSox made two of the most significant moves of any team this offseason, acquiring closer Craig Kimbrel from the Padres and signing free agent starter David Price. And while the Red Sox did finish last in the AL East last year, they weren’t as bad as their finish and 78-84 record would indicate. Hanley Ramirez’s awful defense in left field is being mitigated by moving him to first base. If him and Pablo Sandoval even hit at a league average, let alone above average, level, Boston’s offense will be a juggernaut with those two, Mookie Betts, Xander Bogaerts, the retiring David Ortiz, and Dustin Pedroia.

The rotation could be a problem, but Price is essentially replacing the departed Wade Miley. Slotting him in front of Clay Buchholz, Rick Porcello, and Eduardo Rodriguez should help rectify any issues that arose last year. The bullpen was also strengthened not only through the addition of Kimbrel, but also that of Carson Smith, brought over from the Mariners in the Miley trade. Going into this season, I’m getting the feeling that this Red Sox team could resemble the World Champions of 2013 rather than the disappointments of 2012, 2014, and 2015.

Chicago Cubs OVER 89 wins. The Cubs won 97 games last year, and Vegas set their win total at 89. When a total is set this high, I generally don’t go anywhere near betting the over, but this is a special case. Yeah, the Cubs got great seasons from young players like Kris Bryant, Addison Russell, and Kyle Schwarber and an unexpectedly awesome year from Jake Arrieta, and expecting those players to replicate their 2015 seasons could be a fool’s errand. But any setbacks those players deal with this season should be offset by the improvements the Cubs made by adding Jason Heyward, John Lackey, and Ben Zobrist, essentially replacing Dexter Fowler, Dan Haren, and Starlin Castro on their roster.

Plus, there’s also the matter of the rest of the NL Central – the Cardinals lost both Heyward and Lackey to the Cubs. The Pirates are arguably a worse team going into 2016. The Brewers and Reds are in rebuild mode and look to be 90 loss teams once again. So unless the Cubs are flooded with injuries, something we can’t really project months in advance, how are they going to win eight fewer games than a year ago?

Miami Marlins UNDER 80.5 wins. Fun fact: the Marlins haven’t finished .500 since 2009. This is an organization that is perennially in rebuilding mode, and the only significant additions they made this winter were manager Don Mattingly and starting pitcher Wei-Yin Chen. So…where are the extra ten wins coming from? Chen and a full year of Jose Fernandez will help bolster the rotation, and a full year of Giancarlo Stanton would help out the offense, but I still have questions about this squad.

Will Dee Gordon have another great year after his breakout 2015? Can Justin Bour keep thriving with regular playing time? Will the organization drive Marcell Ozuna away for good? Who will fill out the rotation behind Fernandez and Chen? Is Jeffrey Loria going to get upset and change the plan in June once again? Until the Marlins actually commit to *something* and stick with it, I’m not betting on them to succeed.

I’ve got a feeling
Colorado Rockies UNDER 68.5 wins. The Rockies remind me a bit of the Marlins – they’ve been mediocre for a few years in a row now and I have no confidence in them righting the ship any time soon. That being said, 68.5 is a low number, even though the team hasn’t been able to clear that mark in three of the last four seasons. Colorado won’t contend this year, their first season without Troy Tulowitzki in a decade. They may not have Jose Reyes, his replacement at shortstop, for awhile depending on the outcome of his domestic abuse charges. Their only significant additions this offseason were a trio of relievers (Jake McGee, Jason Motte, and Chad Qualls), Gerardo Parra, and Mark Reynolds.

The team’s rotation is still a disaster, even though the putrid Kyle Kendrick is gone. Nolan Arenado and Carlos Gonzalez are both awesome hitters, but Arenado could be trade bait come July if the team struggles as expected and Gonzalez is not only trade bait, but also has had issues staying healthy for years now. And just like the next team will talk about, the Rockies play in the NL West, where the Giants and Diamondbacks both improved and the Dodgers look strong as well. It could be another long season in Colorado.

San Diego Padres UNDER 74 wins. The Padres went 74-88 last year. This winter, they lost their best hitter in Justin Upton to the Tigers, and traded their two best relievers in Craig Kimbrel and Joaquin Benoit to the Red Sox and Mariners, respectively. They also saw Ian Kennedy depart in free agency to the Royals and dealt Odrisamer Despaigne to the Orioles, Jedd Gyorko to the Cardinals, and Yonder Alonso to the Athletics.

But hey, aside from all of that, it’s looking pretty good for the Padres! They’ll have a worse offense, a worse bullpen, and a worse rotation than they did in 2015, and won’t win more games than they did last year unless something insane happens.

Seattle Mariners UNDER 83 wins. This is the choice on my list I had the most problems with. I like a lot of what Jerry Dipoto has done this winter for the Mariners, but I don’t think he’s improved them by seven wins in the rough AL West. The team will be better defensively after shedding Logan Morrison and Mark Trumbo, and the litany of acquisitions made to improve the bullpen (notably, Joaquin Benoit and Steve Cishek) should pay dividends.

However, I still have questions about the rotation past Felix Hernandez, even after the acquisition of Wade Miley and Hisashi Iwakuma re-upping with the team after his deal with the Dodgers collapsed. Plus, Robinson Cano is on the wrong side of 30 and struggled at times last year (though he had a strong second half) and Nelson Cruz turned 35 in July. I wouldn’t be surprised if this team contended in 2016, but I’m not confident in their ability to take a huge leap forward this season.