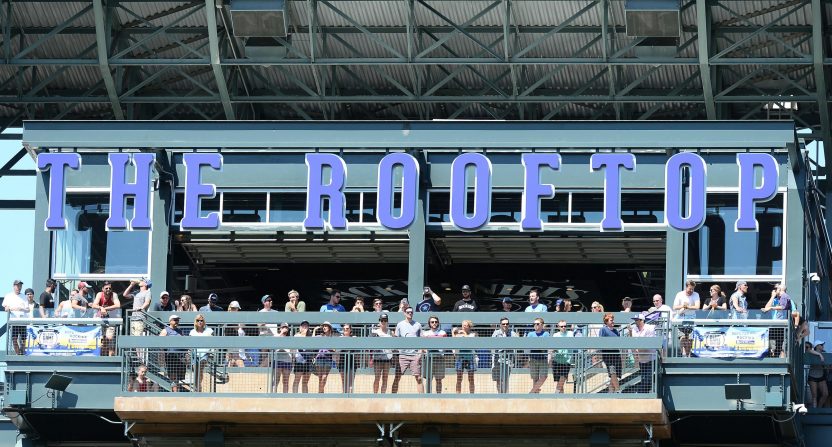 Daily life for the freelancer or work-from-home business person can turn into a bit of a grind. There’s only so many times you can go to the same coffee shop like a laptop hobo. If you work from home you end up never leaving the house. You can go to a coworking space but that just becomes another office eventually. You’d love to try some new things but you don’t want to risk showing up and finding out the WiFi sucks or that they make you pay for something every two hours in order to stay online.

Sometimes, you just want to find a workday experience that freshens things up. The Colorado Rockies have heard your cries, business person, and they have your answer.

Per the Denver Post, the Rockies have started offering a “Business Person Special.” For $21, you can show up with your laptop and do a day’s work during a game in U310-314, otherwise known as Coors Field’s standing-room-only Rooftop section. Your ticket also gets you a CHUBurger, fries, and an 18-ounce beer or 16-ounce soda. The deal is only good for select games in the 2018 season.

One of those select games recently took place when the San Diego Padres came to town, and the Post’s John Meyer went to the stadium to see if the experience lived up to the hype. Or, at least, if it allowed someone to actually get some work done while the Rockies were getting work done down below.

Investigative reporting: What you get for the $21 “Business Persons Special” at Coors Field (Hint: It’s a great deal). pic.twitter.com/caAPhZUKIM

As you might imagine, the fact that the section is standing-room-only was a bit of a sticking point. If you’re used to sitting and doing your work most days, you’re probably going to get tired of standing for three hours straight, regardless of where you are. Couple that with the glare of the sun on his laptop and it became abundantly clear that there wasn’t going to be a lot of work getting done that day.

Therein lies the rub for a promotion like this. Ultimately, it has less to do with providing some kind of abstract coworking space for baseball fanatics. It’s basically just a label on a ticket deal meant to entice you to take it easy on a Tuesday and head to the ballpark instead of Starbucks. It’s not uncommon for people to use baseball games as excuses to just hang out or grab some beers with friends, but it’s hard to forget you’re at a literal Major League Baseball game when your boss is asking for the latest numbers. Seems like an unnecessary risk unless you weren’t planning on getting much work done that day anyway.

Of course, if it’s a Friday and you were probably going to coast through the afternoon anyway, there are worse places to half-ass a day of work than at a baseball stadium. Just don’t kid yourself that you’re going to spend the day scanning excel sheets instead of scanning the outfield.