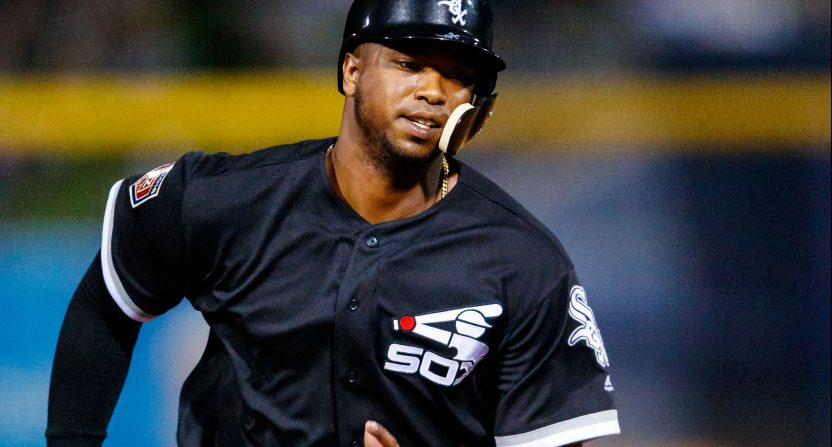 This week, the most significant contract extension reported was Mike Trout’s 12-year, $430 million pact with the Angels. But Trout wasn’t the only player to get some more guaranteed money from his current team. Alex Bregman got an extra five years and $100 million from the Astros. The Rays guaranteed Brandon Lowe $24 million over six years, maxing out at $49 million over eight years. And then on Wednesday, the White Sox reportedly agreed to a six-year, $42 million deal with top prospect Eloy Jimenez that could max out at $75 million over eight years.

These three players (four, if you include Trout) have had quite dissimilar careers so far. Bregman has played two full seasons for the Astros, slashing .282/.366/.500 over his career with 58 home runs and 29 stole bases. He finished fifth in 2018 AL MVP voting, won the 2017 World Series with Houston, and wasn’t scheduled to hit free agency until after the 2023 season. Lowe has played in just 43 MLB games, slashing .233/.324/.450 with six homers. Jimenez hasn’t played in the majors at all, has been a top five prospect in baseball in each of the last two seasons, and hit a combined .337/.384/.577 with 22 homers between AA and AAA last season.

The three contracts have also raised the bar for young players across baseball in several different ways.

First, we have the Bregman category of extension – the young, budding star that has produced at the major league level. If a team is going to want to buy out all of a player’s arb years when he’s performed at a level like Bregman has, discounts won’t be available. If you’re someone like Ronald Acuna, Matt Chapman, or Javier Baez, you look at the deal Bregman got and use that as a base. Something like five years and $50 million won’t get the job done. The five year, $30.5 million deal that Ender Inciarte got prior to 2017 for four arb years and one free agent year? That’s ancient history. It’s gone. You’re not getting a deal like that done with a player that has at least two seasons of above average production under his belt anymore.

The second category is Lowe’s extension – a lightly touted prospect getting a low level of cost certainty, with potential to become a long-term bargain if he exceeds expectations. This is a lot like Evan Longoria’s first deal with the Rays (which funnily enough, actually gave him less guaranteed money than Lowe’s deal, despite Longoria having a raft more potential) – minimal playing time in the majors, plenty of cost certainty for the club, future earning potential for the player if he plays better than expected. You typically don’t see these deals too often, because the window to get one done is pretty slim. Look at someone like Franmil Reyes in San Diego – if the Padres were happy with his play over 87 games in 2018, it would take at least what Lowe got to lock him up long-term.

And then, there is Eloy Jimenez, the latest prospect to get an eight-figure guaranteed deal before even one plate appearance in the majors. We’ve seen this happen before – the Phillies gave Scott Kingery six years and $24 million (maxing at nine years and $65 million) during Spring Training last year, and let him break camp with the team as a result. The Astros also famously gave Jon Singleton a five-year, $10 million deal back in 2014, immediately called him up to the majors, and got a total of 114 games out of him before releasing him last May. Jimenez is far more highly touted than either Kingery or Singleton (who both maxed out as top 50 prospects, but were never top 25 guys), and if you’re a similarly touted prospect (Vlad Guerrero Jr and Fernando Tatis Jr, take notice) nearing major league readiness, you’re shooting for at least $40 million guaranteed. Victor Robles of the Nationals and Nick Senzel of the Reds (assuming he’s healthy) are two other players that would fall into this bucket.

The fourth category is rarefied air. It’s the Mike Trout/Nolan Arenado class of contract extension. This is the player who is a bona fide superstar, a year or two away from free agency, and a team will need to dump an incredible amount of money on his doorstep. Mookie Betts is the most significant player in this category. The reigning AL MVP will be a free agent after 2020, and given that he’s only 26 now, the Red Sox will need to give him a contract extension in excess of Arenado’s $260 million to keep him in Boston. But given how teams are frantically sprinting away from players over the age of 30 in free agency, the window for getting these type of deals is also small. Paul Goldschmidt is an absolute stud, but will be 32 when he hits free agency after this season. Freddie Freeman will also be 32 when becomes a free agency after 2021. Neither of them is going to get $200 million in free agency. Hell, neither will probably even get $100 million – but at least Freeman already got a $100 million deal from the Braves back in 2014.

You may notice that throughout this whole article, I never mentioned one pitcher. That’s because pitchers are a different beast, more prone to injury than position players and teams have seemingly been wary with guaranteeing money to young pitchers if they can avoid it. The Braves have passed on working out an extension with Mike Foltynewicz. The Mets haven’t gotten something done long-term with Jacob deGrom, Noah Syndergaard, or Zach Wheeler. The Phillies did get a four-year, $45 million deal done with Aaron Nola, but it only buys one one free agency year (and possibly a second). Nola, who is just 25 and finished third in NL Cy Young voting in 2018, got barely more guaranteed money than Jimenez, who hasn’t played a lick in the majors. To me, that really sums up the difference in the way teams are valuing young position players and pitchers – they’re willing to go year to year with young pitchers in case of injury or ineffectiveness, while they seem to value cost certainty more with position players.