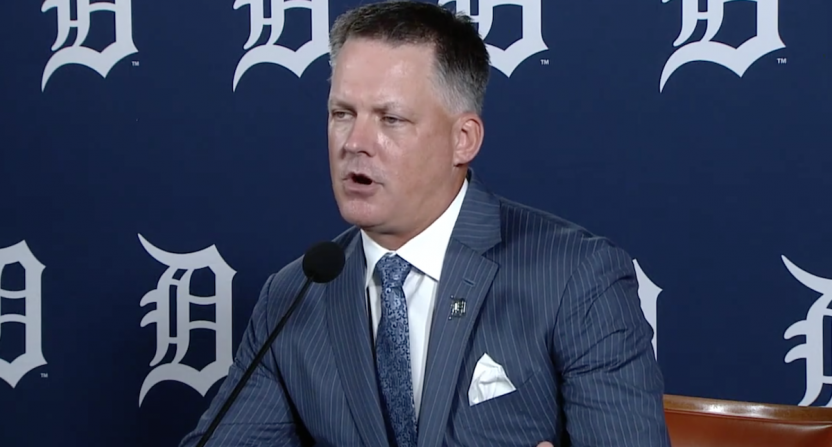 Mere days after his one-season suspension was served, A.J. Hinch has another managing job in Major League Baseball. And the Detroit Tigers hope their former catcher is the man to lead the team back to perennial contention and World Series aspirations.

Hinch, 46, replaces Ron Gardenhire, who retired before the regular season finished and wasn’t likely to return with his contract expiring.

Detroit moved aggressively in hiring Hinch, signing him to what the team announced as a “multi-year deal” within 24 hours after interviewing him for their managerial vacancy. Expediting the process may have been the Chicago White Sox’s surprise hiring of Tony La Russa for their field manager opening, doing “a big favor for the Tigers, according to a team official quoted by The Athletic’s Cody Stavenhagen.

Hinch became one of the top managerial candidates available when MLB suspended him and general manager Jeff Luhnow among its penalties for the Houston Astros’ sign-stealing scheme. During the 2017 season, Astros players stole catcher signs from live video feeds and signaled which pitch was coming to batters at the plate (typically by hitting a trash can in the dugout tunnel). Houston won 101 games and a World Series championship that season.

“That’s part of my story; it’s not the Tigers story,” said Hinch at his introductory press conference. “I understand how wrong that was. I’m sorry for that and I’ve said that before. I’ll say it again; I’ll continue to say it. I’ll never forget the feeling that I’ve had throughout the past year as I’ve navigated this with my family.

“You quickly get to the exciting time of getting back and leading a group of men again, and establishing what Tigers baseball is going to be all about.”

Winning a World Series is surely the highlight on Hinch’s resume that made him such an appealing candidate once his suspension ended following the World Series. Yet his association with the Astros’ cheating scandal likely limited what was already a small market of three manager openings in MLB. For instance, would the Boston Red Sox have hired him after firing Alex Cora for his involvement in Houston’s scheme, along with utilizing similar measures in Boston for the 2018 season?

"Raving about what Detroit is like when the team is winning, and there's no place like it," Hinch said.

The Tigers compiled a 23-35 record during the shortened 2020 season, finishing last in the AL Central. That followed a 2019 campaign in which Detroit lost 114 games.

Hinch has previous experience losing 100 games with the Tigers, but as a player during the 2003 season. The former catcher appeared in 27 games for a team that eventually compiled an American League-record 119 losses.

Under general manager Al Avila, Detroit’s struggles resulted in getting the No. 1 overall pick in the 2018 and 2020 MLB Drafts, with which pitcher Casey Mize and third baseman Spencer Torkelson were selected. That gives the Tigers’ minor-league organization potential future stars, but the overall farm system lacks the depth — especially in position players — that could fuel a turnaround like Houston engineered after three consecutive 100-loss seasons from 2011 through 2013.

A.J. Hinch said his phone rang 30 minutes after last out of World Series. Al Avila was on the other end. Hinch was on a flight to Detroit the next day (Wednesday) and interviewed. He was set to return to Houston last night but cancelled flight to finish a deal.

Hinch might not be a polarizing hire among Tigers fans, though there is certainly a sizable contingent uncomfortable with the team hiring someone associated with arguably the worst cheating scandal in baseball history. Judging from social media and sports talk radio, however, a majority of Detroit fans are happy with the Tigers hiring a proven winner, rather than a first-time manager who has to learn on the job.

Furthermore, aggressively pursuing and hiring the best person available harkens back to the approach taken by longtime team owner Mike Ilitch, who passed away in 2017.

Also the owner of the NHL’s Detroit Red Wings, Ilitch hired leading hockey minds like Bryan Murray and Scotty Bowman, while also paying top salaries for players. With the Tigers, he hired Randy Smith (then viewed as one of the rising young GMs in baseball) and Phil Garner before finally getting an established executive and talent evaluator in Dave Dombrowski. Later, Jim Leyland was brought on as manager.

Hiring Hinch might be the first step in current owner Christopher Ilitch following his father’s path and making some big moves once a team is ready to contend for postseason spots and championships again. But putting a winning manager in the dugout doesn’t elevate the Tigers to contenders yet.

Hinch and Avila still have a lot of work to do in building a team that can keep pace with the White Sox, Minnesota Twins, and Cleveland Indians in the AL Central. That’s a steep hill to climb before thinking about pennants and World Series titles.

The talent level has to increase. Can younger veterans like Matthew Boyd, Michael Fulmer, and Daniel Norris anchor a starting rotation? Prospects like Jeimer Candelario, Isaac Paredes, and Daz Cameron have to develop into everyday major leaguers, along with Tarik Skubal, Gregory Soto, and Joe Jimenez. Mize, Torkelson, and Riley Greene need to become future stars.

Maybe the foundation has been laid. Avila said the Tigers are no longer rebuilding, but now building. That’s a catchy sales pitch. Hinch could be the guy who helps fulfill that promise, as he did in Houston with a young core of talent. That’s created a lot more excitement in Detroit than there was 48 hours ago.