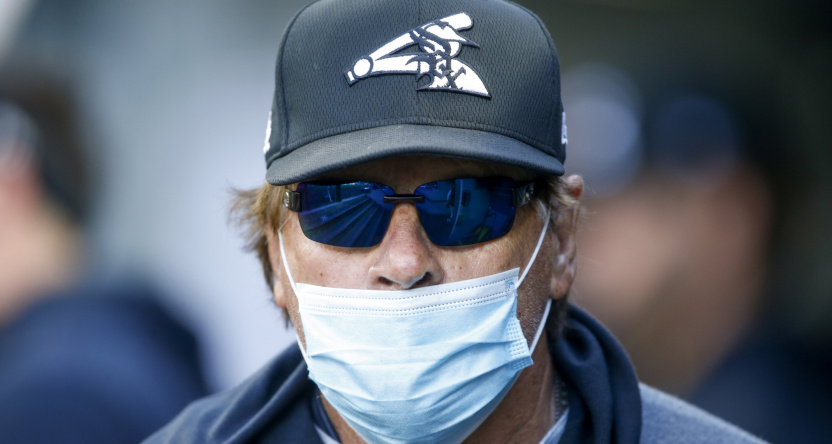 One would think that the best possible outcome of a baseball at-bat for the hitter is a home run; that scores the batter and anyone else ahead of them and doesn’t produce an out. However, Chicago White Sox manager Tony La Russa (seen above in April) found something to criticize with designated hitter Yermin Mercedes’ home run Wednesday. That home run came in the ninth inning with the White Sox up 15-4 on the Minnesota Twins, and it came off position player Willans Astudillo, who threw a pitch right over the plate at 47 miles per hour with a 3-0 count. And Mercedes blasted that over the center field wall:

Yermin, why'd you have to do La Tortuga like that!

Mercedes’ hit produced some complaints from the Twins’ broadcast:

But complaints from local broadcasters of the team that lost out here are one thing. Complaints from Mercedes’ own manager are something else. And that’s what White Sox manager Tony La Russa did Tuesday, somehow describing Mercedes’ home run as “a big mistake” and saying there would be a “consequence”:

Tony La Russa called it a "big mistake" for Yermin Mercedes swinging at the 3-0 pitch from Willians Astudillo, admitting there will be consequences.

Tony La Russa was ‘upset’ that Yermin Mercedes hit a home run on a 3-0 count last night in a blowout win.

“He made a mistake. There will be a consequence he has to endure here within our family.”

La Russa on Mercedes: "The fact that he's a rookie and excited helps explain why he just was clueless. But now he's got a clue."

La Russa rejected Mercedes rationale that he was just being himself:

"I heard he said something like, 'I play my game.' No he doesn't. He plays the game of Major League Baseball, respects the game, respects the opponents. And he's got to respect the signs."

La Russa: "Yeah, of course I talked to him about it. It's a learning experience. Made a mistake. I actually apologized to the Twins. I sent a message over there, (said that) it's not acceptable. And I'm certain that it will not happen again with Yermín."

That was definitely a wild zoom with Tony. He wouldn't reveal the punishment (it's not playing time) then joked:

“I could try and spank him but he’s too big and strong.”

Here’s video of La Russa’s commentary on this:

It seems pretty silly for a player’s own manager to complain about this. Yes, the outcome of the game wasn’t in question, but statistics still matter for individual players, and that home run counts just as much as any hit off an actual pitcher. It seems pretty unfair to tell a player to fail just because they’re not facing high-quality opposition. Oh, and Astudillo threw a perfect inning (including a 46-mph strike) back in April, so his pitching has worked at times. And those outs counted against the batters just like outs against normal pitchers would.

And while La Russa later clarified that his issue was more about Mercedes ignoring the take sign, and that he would have been okay with a homer on a 3-1 count, a take sign here was incredibly stupid given the pitch that was thrown and the outcome that resulted. Mercedes’ ignoring of that sign produced a better baseball outcome. And while it’s somewhat expected that broadcasters from the other team might complain, having Mercedes’ own manager complain about the best possible outcome to an at bat is unbelievable.

And it’s pretty rich for La Russa to call anyone else “clueless” two weeks after admitting he didn’t know an extra-innings rule, something that actually might have affected a game. It’s also pretty rich for La Russa, who has faced two DUI charges with little consequence (his latest, from February 24, 2020, was resolved in December with a plea to a lesser charge, one day of home detention, a $1,400 fine and 20 hours of community service), to talk about respect for unwritten rules.

If MLB wants to put in a way to not punish batters for not doing their best when the game’s out of control, then this would be a different conversation, but at the moment, those at-bats still count like any other. And it’s disappointing to see La Russa take the side of the other team over the side of his player, and that further adds to the many questions that were asked when he was hired last fall, nine seasons after last managing a game. Many thought the game had passed the 76-year-old La Russa by at that point. With comments like this, he’s giving even more fuel to that fire.