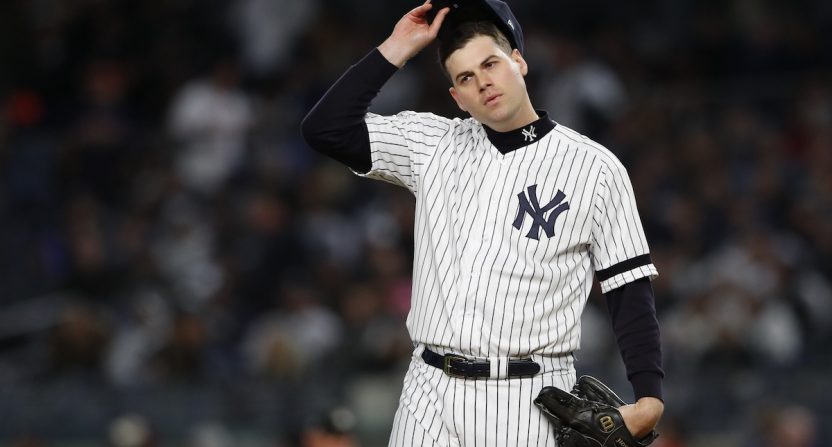 As fierce rivals and competitors in the American League East, the New York Yankees and Boston Red Sox typically don’t make trades with each other. But the two teams made a notable swap on Monday, with the Yankees sending reliever Adam Ottavino to Boston along with minor-league starter Frank German in exchange for a player to be named or cash.

News of the deal was first reported by The Athletic’s Lindsey Adler.

Source: The Yankees have traded Adam Ottavino to the Red Sox.

[Correction: A previous version of this article wrongly stated that Ottavino had been traded for German.]

The trade is a salary dump for the Yankees, who clear nearly all of Ottavino’s $9 million salary for 2021 off their payroll. Boston will also be responsible for the $3 million deferred signing bonus that is set to be paid in 2022. According to ESPN’s Buster Olney, the Yankees will only cover $850,000 of Ottavino’s salary this season.

Evidently, the Yankees were more concerned with shedding Ottavino’s money from their budget than helping their division rival. And getting Ottavino will certainly help the Red Sox bullpen, which finished last year’s shortened season with a 5.79 ERA — the second-worst in the AL.

Ottavino is coming off his worst major league season, compiling a 5.89 ERA in 18.1 innings (24 appearances). Advanced metrics also show that he wasn’t helped by his defense, registering a 3.52 FIP (Fielding Independent Pitching) and a .375 average on batted balls in play.

But Ottavino is still one of the best strikeout relievers in MLB, whiffing an average of 12.3 batters per nine innings. (He struck out 25 batters overall.) In 2019, Ottavino was outstanding, notching a 1.90 ERA with 88 strikeouts in 66.1 innings.

Whether or not Ottavino will be the Red Sox’s closer is yet to be determined. While he would be an improvement over Matt Barnes in that role (nine saves in 13 opportunities, 4.30 ERA, 31 strikeouts in 23 innings), Ottavino hasn’t often held that role in his 10 MLB seasons and has only 19 saves during his career. With the Yankees and Colorado Rockies before that, he and his nasty slider have been more effective coming out of the bullpen in middle or set-up innings when a strikeout is urgent.

For what it’s worth, Barnes said late last season that he preferred to remain Boston’s closer after becoming accustomed to the ninth-inning role.

The Yankees could afford to trade Ottavino with significant bullpen depth on their roster. Closer Aroldis Chapman and set-up man Zach Britton still give New York a formidable late-inning relief corps. Chad Green emerged as a reliable bullpen arm with 32 strikeouts in 25.2 innings, while Luis Cessa allowed only four of 11 inherited runners to score.

This is the first trade between the Yankees and Red Sox since the 2014 Trade Deadline, when New York acquired Stephen Drew for Kelly Johnson.

As MLB.com’s Mark Feinsand pointed out, this is the first time the Yankees and Red Sox have connected on a trade in nearly seven years. And that wasn’t exactly a deal of consequence, though Stephen Drew did play another full season for the Yankees in 2015, largely as their starting second baseman. Kelly Johnson only played 10 games for the Red Sox.

Feinsand also mentions that Ottavino’s salary can now be used to bolster other spots on the roster, likely to bring back Brett Gardner. The 13-year veteran played in 49 games during last year’s COVID-shortened 60-game campaign.