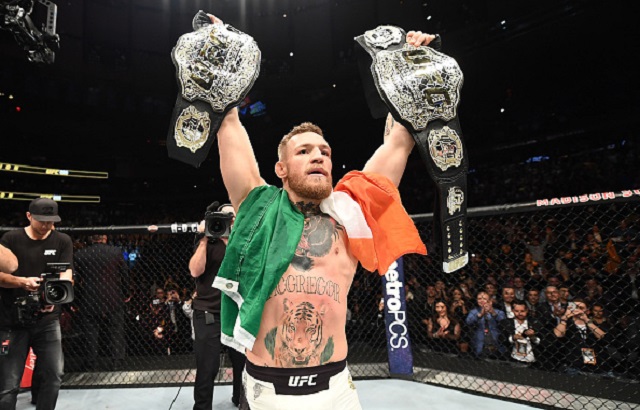 The MMA Ten keeps you updated on the latest news from the world of the UFC and beyond. This week: Conor goes Super Saiyan and makes history, Demi Lovato KOs Rocky, Triple H wants Conor in the WWE and more!

Conor McGregor did it. He became the first UFC fighter to hold two titles at the same time and he did it by absolutely dominating lightweight champion Eddie Alvarez. We found this new angle of the finish that shows what really happened.

That Conor, always showing new skills in the cage.

File this under “Well, duh.” The Telegraph caught up with Triple H, who was on hand to watch McGregor’s historic win at MSG.

“He could come over (to WWE), he’s got it all, man. He’s got the personality, the skills, the talk. He’s an entertainer, for sure,” Triple H said.

Triple H says McGregor’s size wouldn’t matter, especially after WWE added a cruiserweight division. “What does he walk around at? 180 pounds? I have smaller guys now in the WWE. We have 200-pound guys who are stars. You don’t need to be 300 pounds any more.”

McGregor has already had a little Twitter beef with fellow Irishman and WWE superstar Sheamus, so the first rivalry is all set. “You wear ball stranglers and slap men’s asses for a living,” McGregor tweeted at Sheamus. Ronda Rousey was at Wrestlemania, so why not Conor McGregor?

Marc Gasol hit a huge game-winning three to beat the Clippers this week and broke out his Conor McGregor impression in celebration.

Then a fan helped him out with a little creative editing.

I wonder who would win in an MMA fight between Marc and Pau Gasol? I’ll set the line at -140 for Marc. He has some size and youth on big bro Pau.

We’ve told you before on the MMA Ten that Demi Lovato is all-in on her MMA training. If you didn’t believe it before, believe it now. She just knocked out Rocky Balboa.

Stallone cries foul at the end, protesting that he slipped. In doing so, I think he just revealed part of the plot to Rocky 14. He slips during his ninth comeback fight, but thinks nothing of it. He follows up with the doctor and receives a diagnosis that reveals he doesn’t have much time left. He lines up a battle royale with all of his past opponents and drops dead in the ring after beating them all. And finally, we are done with the Rocky franchise. You’re welcome.

Snoop Dogg had his first taste of the greatness that is Khabib Nurmagomedov last week, watching “The Eagle” absolutely wreck Michael Johnson.

“Khabib’s playing games, putting his nuts in his face and all kinda s**t,” Snoop said. Needless to say, the video has some NSFW language.

The win moved Nurmagomedov to 24-0 and he’s demanding a shot at Conor McGregor for the UFC lightweight title.

Your MMA Pictures of the Week: Bloody Chris Weidman

Chris Weidman started his career with 13 straight wins, including two in a row over legendary fighter Anderson Silva. He was the UFC middleweight champion until he met Luke Rockhold at UFC 194. Rockhold layed a severe beating on Weidman and knocked him out in the fourth round. Weidman suffered another brutal knockout at UFC 205 as Yoel Romero landed a knee that made Weidman’s head leak a lot of blood.

Getting Creative to Cut Weight

When Clay Guida dropped to featherweight for the first time, he had a bit of difficulty getting to the weight limit. He joked on social media that he was going to cut his signature long hair. Chicago’s Samantha Diaz was having some trouble with the final leg of her weight cut for her Invicta 20 fight this weekend. She had to resort to that measure, with MMA photographer Esther Lin taking over as styling expert.

Diaz makes her pro debut tonight at Invicta 20. That event can be seen on UFC Fight Pass.

You’d think the UFC deserves a break after the epic event they just put on in New York with UFC 205. Instead, they will run two events this weekend. UFC Fight Night 99 will air live on UFC Fight Pass from Belfast, but it’s more like UFC Fight Morning or Afternoon depending on your location in the states. It kicks off Saturday at 12:15 p.m. ET and features a rematch of Uriah Hall vs. Gegard Mousasi in the main event. Hall won the first fight via devastating flying knee last year. Former Bellator heavyweight champion Alexander Volkov makes his UFC debut will also fight on the card.

Also on Saturday, UFC Fight Night 100 comes to you from Sao Paulo, Brazil, with preliminary bouts beginning at 6 p.m. ET on UFC Fight Pass. The prelims move to FS1 at 7 p.m. ET, followed directly by the main card, which also features a rematch in the main event. Ryan Bader and Antonio Rogerio Nogueira will do it again, more than six years after their first tussle. Bader won that by decision, and he is set to become a free agent after this fight. Wunderkind Thomas Almeida (20-1) is on the card, as is a very intriguing matchup between strawweight contenders Claudia Gadelha and Cortney Casey. 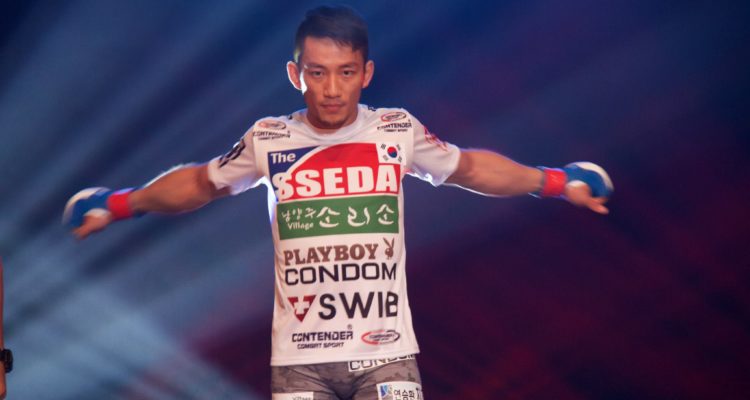 You’d think with two UFC events there would be many fights to choose from, but the nickname game isn’t all that strong for the combatants fighting this weekend. Still, we found one worthy of our weekly segment: Brett “The Pikey” Johns vs. “The Handsome” Kwan Ho Kwak.

Johns told UFC.com that his nickname came about because of how he dressed as a lad, while Kwak told them why he’s called “The Handsome”: “It’s generally accepted that I’m the best looking member of Korean Top Team.”

What’s great about this matchup — besides the nicknames — is that both fighters are undefeated. You can catch them do work early on the UFC Fight Night 99 broadcast on UFC Fight Pass.

Here’s a great piece put together by the UFC, taking you inside the cage to hear audio you don’t get while watching the broadcast. Listen as Khabib Nurmagomedov talks to Dana White while bashing Michael Johnson’s head, and hear Miesha Tate tell boyfriend and UFC fighter that she just can’t compete in MMA anymore.