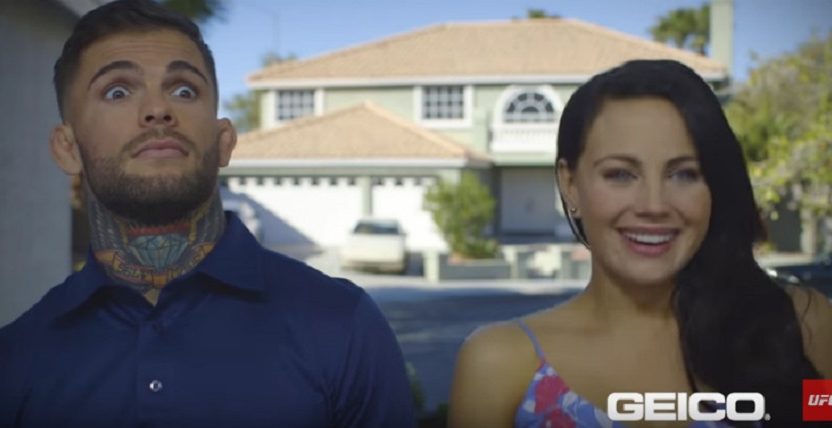 The MMA Ten keeps you updated on the latest news from the world of the UFC and beyond. This week: We have some laughs with Conor McGregor impressionist Al Foran, listen to former middleweight champions piss and moan, check out the first look at TUF: Redemption, and of course, we have your MMA nickname battle of the week. Let’s go!

Meet Al Foran, one heck of an impressionist. In this video, he gets called on stage to have a face-to-face with Floyd Mayweather. He starts out as Conor McGregor, ends as Donald Trump, and drops some De Niro, Pesci, and Mike Tyson in between. Spot. On.

Rumors of the demise of the UFC reality show The Ultimate Fighter were indeed greatly exaggerated. Instead, TUF rebooted with a new concept: bringing back fighters who have already appeared on the show, but are no longer in the UFC. The fourth season of the show was similar in that it featured contestants who had previously been with the UFC, but this season is comprised of fighters who have all competed on TUF.

They dropped the first promo this week and much has been made of a brief spat between the coaches, as current UFC bantamweight champion Cody Garbrandt grabs the throat of former champ T.J. Dillashaw.

Well, look who showed up in a GEICO commercial.

Fifteen minutes or less in a cage with Cody Garbrandt could get you wrecked. I would have run with that. But the commercial is still excellent, and it’s good that tatted-up UFC champs are getting some prime gigs.

It’s official. Former UFC welterweight champion Georges St-Pierre will challenge current middleweight champion Michael Bisping for his title. UFC president Dana White says the fight will likely take place in the second half of this year. It will be a fun watch, but it leaves the rest of the middleweight contenders — those with an actual claim on a title shot — waiting in the wings while the UFC welcomes back GSP and makes a ton of cash in the process.

It’s really silly to bring back a guy who abandoned his title and basically retired for three years, and give him a title shot in a division he’s never fought in before. GSP against any contender would make a ton of cash, and it wouldn’t disrespect and anger the middleweight contenders like this match-up. It’s a fascinating match-up. Just one that shouldn’t be scheduled right now.

Former middleweight champion Luke Rockhold is one of the contenders who can’t understand why the UFC made this match-up now. Rockhold spoke with Submission Radio and expressed his dismay at the announcement. He also called Bisping a drunk idiot and made a mess spewing sour grapes all over the place.

“I heard (Bisping) caused quite a stir in Las Vegas this weekend being a drunk idiot and running his mouth. The guy’s out of his mind thinking he expected what he was gonna do, thinking he knew what he was gonna do. I’ll tell you what, when a guy’s gonna do, how he reacts after a fight. You go watch our first fight, that’s when a guy knows what he’s gonna do. Bisping knows he’s a lucky son of a b****, you know, squeaking out the way he did, and he’s gonna run with it. So that’s the fight. He thinks he didn’t get lucky, he knows. Look at his face after the second fight. That’s a sign of a lucky man on the run.”

Rockhold has no one to blame but himself. You get cocky and leave your hands down in the UFC, and most likely you are getting slept. Rockhold is currently recovering from a knee injury, but he spoke about what’s next in his career.

“I’m taking a detour. I’m going straight for Bisping’s ass. He’s been running his mouth, he’s been talking and avoiding every fight possible. That’s the fight I would pursue – shut him up, move on. There’s nothing more to be done.”

The Bisping response? Wait for it…

You mess with the bull, you get the horns. Bisping is not only the UFC middleweight champion, he slays with his words — and his social media accounts. Case in point: Bisping took Rockhold’s quote and mocked him on Instagram.

Somewhere, somehow we just have to see another fight between these two.

Michael Bisping’s coach Jason Parillo spoke with the Las Vegas Review-Journal about the GSP fight, and he’s not too concerned about facing the former welterweight champion.

Parillo says Bisping’s last three opponents would throttle GSP, and it’s fine if he wants to think in those terms, but MMA math is usually quite fuzzy. Who someone else beat or could beat has little to do with the outcome of the two fighters in the cage. Once the cage door closes, all things are new, and past records and accomplishments don’t amount to anything. Ask Luke Rockhold.

Weidman: Bisping Has “Golden Horseshoe Up His A**”

Former UFC middleweight Chris Weidman has been absolutely wrecked in his last two fights. Yoel Romero got him with a destructive flying knee last November, and Luke Rockhold finished him in round four of their title fight at UFC 194 in 2015. Those losses haven’t stopped Weidman from speaking his mind, tearing into Bisping and the mettle of his title in an interview with Fox Sports.

“Listen, Bisping’s got the golden horseshoe up his ass as champion. This guy, I gave him the opportunity to fight for the belt and he made the most of it. He pulled the punch out and knocked out Rockhold and became champion and since then he’s fought the No. 14 ranked guy and then a guy that’s on a three-year long layoff.”

Weidman returns in April with a killer match-up against Gegard Mousasi at UFC 210.

Your MMA nickname battle of the week will take place in the UFC lightweight division, a matchup between No. 11 Francisco “Massaranduba” Trinaldo (21-4) and Kevin “The Motown Phenom” Lee (14-2). Trinaldo’s nickname came from a character in a Brazilian TV show called Casseta & Planeta. Massaranduba is known as a particularly quarrelsome character on the show, and Trinaldo carries the nickname due to the having the same disposition.

We need more American fighters to take this tactic. We need some fighters to go by Cartman or Dennis Reynolds, or how about a Principal Skinner or an Adam DeMamp? Young fighters without nicknames, get going on that.

His opponent is Kevin Lee, a fast and talented fighter from Detroit, hence the nickname “The Motown Phenom.” Trinaldo is probably one of the best fighters you haven’t heard of, and he’s won seven straight in the UFC. Lee is always a fun watch and he’s riding a three-fight win streak. You can catch this one during the prelims on FS1.

Vitor “The Phenom” Belfort says the UFC should create a new division called the “Legend League,” a place where retired fighters with big names can do battle and help the new UFC owners make money.

“We need something new – I can see now. These new owners, they want to create something new. There is a lot of changing. What I want to propose to them is creating a league inside the UFC, the Legend League, so we can bring back these retired people – bring them back to the game and sell more tickets – give more opportunities so they can make more revenue. I can lead that. We can make a title fight between me and one of the legends, and that can be a new program in the UFC.”

Belfort fights this weekend against Kelvin Gastelum, so hopefully, he isn’t projecting a loss with this new idea. While we all want a return to our glory days — I’d love to dunk on a 9-foot rim again — doing battle in a cage after years of retirement when you’re almost near AARP status is a horrible idea. I’m confident we’ve learned enough about head trauma that this will never happen. Or it’s a million-dollar idea and it will be coming to you next fall. One of those.