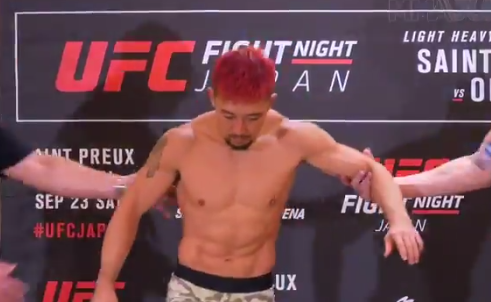 The fight inside the cage is dangerous, but sometimes the biggest fights come with the scale. Fighters will completely dehydrate themselves to the point where their body simply can’t function correctly. That seems to be the case here with Mizuto Hirota. Check out this quick video:

Hirota was pulled from the card after the weigh-ins. Erik Magraken from Combat Sports Law sums up the event perfectly: “Weight classes, designed for fighter safety, have been perverted into one of the greatest dangers in combative sports.”

Edmond Tarverdyan is the widely-criticized coach for former UFC bantamweight champion Ronda Rousey. Even Rousey’s own mother said he is a terrible coach. “I think he hit the lottery when Ronda walked in there.”

If Rousey returns to the UFC, many think it would be with a different coach and team. But Tarverdyan was on The MMA Hour recently and talked about a possible return for the superstar.

“I’ve spoken to her, I don’t know if she’ll do it – one more fight, maybe if she really can. If her body does give her one more fight and she really wants to mentally, she might. It’s 50-50 right now, I would say.”

At this point, it seems more likely Rousey joins the WWE than do battle in the UFC, but you can never rule out her coming back because of her ultra-competitive nature.

If Rousey does make a comeback in MMA, it won’t be against UFC champion Cris Cyborg.

“If Ronda wants to come back for a fight, I believe it’s better for her to fight Miesha Tate. I’m in another stage of my career. I wanted to fight Ronda when she was psychologically well and confident,” Cyborg told MMAFighting.

But Cyborg did have another idea as to how the two could tussle — in the WWE. “If she wants to make a good fight for the fans, we can make it at WWE. It would fit perfectly to go to Hollywood, and for me would be another challenge in my career. And something brilliant, her coach would fit perfectly in her corner in WWE, he’s nothing but a joke.”

Rousey vs. Cyborg was the “Mayweather vs. Pacquiao” fight for MMA fans. It was the mega-fight that everyone wanted to see. It looks like we will never see it, and even if we do, it won’t be when the fighters are in their prime. Cyborg would like to fight Holly Holm in her first title defense, rumored to be set for UFC 219.

These days Justin Buchholz is better known for his coaching career at Team Alpha Male, especially after Cody Garbrandt captured the UFC bantamweight title. But Buchholz also competed in the UFC, and he just fought for the first time since retiring in 2015. His comeback came at Alaskan Fighting Championship 133, and Buchholz finished opponent Marques Facine with a barrage of violent kicks.

Justin Bucholz landed several hard soccer kicks to the body of Marques Facine and the last one went to the head and Facine was done #AFC133 pic.twitter.com/11Tl1Yjo0m

Soccer kicks to the head are illegal in most promotions, but the last one was ruled accidental and Buchholz scored his first win since 2013. Facine left the cage on a stretcher, and you have to imagine he suffered some broken ribs from those devastating kicks.

Those who face “Platinum” Mike Perry usually end up staring at the lights, backs on the canvas. Perry knocked out Alex Reyes at UFC Fight Night 116 last weekend, recording the 11th win of his pro career. All 11 have KO/TKO finishes. He is savage.

People are starting to utter the C-word when talking about Perry now. The C-word being Conor, of course. Fans and pundits are starting to herald Perry as the next big megastar for the UFC. He’s as exciting a fighter there is in the UFC, but let’s see what happens when he starts facing ranked opponents. That will happen with his next fight as Perry moved into the top-15 with his latest win.

Saki Has a Message for UFC Light Heavyweights

Gohkan Saki is a vicious power-puncher and he’s won multiple kickboxing titles, including belts in GLORY and K-1. He signed a multi-fight contract with the UFC and will throw down against Henrique da Silva in his UFC debut Friday night. He has something to tell the division.

So, @GokhanTheRebel – have any message for the LHW division?

You can check out this Gohkan Saki highlight reel to get a taste of the utter damage he can deliver in a fight. Saki coming to the UFC is a big deal, and it will be exciting to see if he can find the same success in MMA as he did in kickboxing.

Gilbert “Durinho” Burns is mostly known for his incredible Brazilian Jiu-Jitsu skills having won multiple world titles in the sport. But it looks like his move to MMA is coming together nicely after he scored a sick walk-off KO of Jason Saggo at UFC Fight Night 116.

Throwing a knockout punch then raising your hands high in the air with your opponent flattened is the equivalent of a big bat flip after a home run. Burns knew he didn’t need to throw any more strikes when Saggo went timber and hit the deck.

Kamaru “The Nigerian Nightmare” Usman was in the world-famous UFC Nickname Battle of the Week in last week’s column, and he performed as advertised with a knockout of Sergio Moraes.

Usman had been winning fights by taking his opponents down and beating them up for three rounds, but he finally got himself a finish. The guess here is we will now be paying to see Usman fight. Expect him to have a slot on the main card of an upcoming pay-per-view, perhaps before the end of the year.

Willie Mays hitting below his weight. Peyton Manning getting pick-sixed. Shaq barely able to dunk the ball. Sometimes it’s hard to watch the greats in the latter stages of their careers. Such is the case with Takanori Gomi, one of the few fighters from the PRIDE era still competing.

“The Fireball Kid” was given his moniker due to his epic combination of speed and power, and he was one of the best and most exciting fighters in the 2000’s. But now it’s somewhat sad to watch him compete. He’s dropped four straight fights but hopes to end that streak when he faces Dong Hyun Kim, aka “The Maestro,” Friday in Saitama, Japan. “The Maestro” should not be confused with the other Dong Hyun Kim in the UFC, who goes by the nickname “The Stun Gun.”