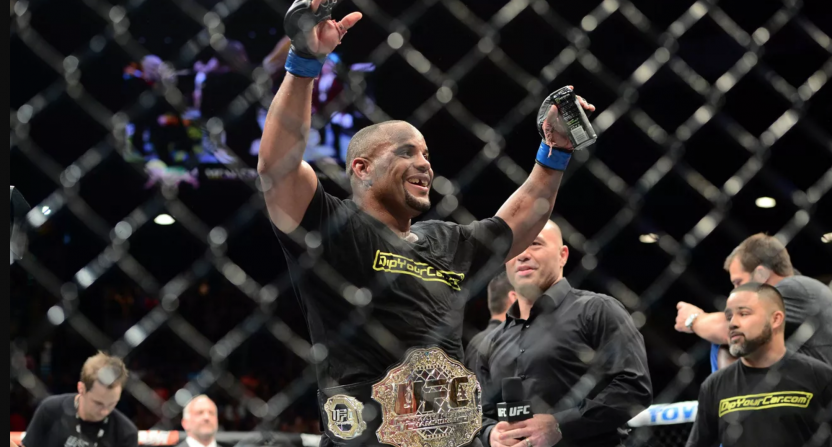 UFC 210 takes place in Buffalo Saturday night with the UFC light heavyweight title on the line as champion Daniel Cormier takes on Anthony “Rumble” Johnson. This is the only time a wide-right kick will be acceptable to Buffalonians (RIM SHOT). I read they actually prefer to be called Buffaloites, but that’s not quite as fun as Buffalonians now, is it?

Regardless of the proper nomenclature, those citizens of Buffalo have a heck of a card coming their way, so let’s break down UFC 210.

The Main Event: Cormier vs. Johnson

Let’s run that whole thing back. It’s take-two for Cormier and Johnson, as the two fought for the light-heavyweight title at UFC 187. Cormier choked Johnson out in round three of that bout, and he’s defended the title once since then, besting Alexander Gustafsson by split decision to keep the crown. He then defeated legend Anderson Silva in a non-title bout at UFC 200.

So while we wait for the return of Jon Jones — still the champ as many see it — we get this fight again. And that’s just fine by me. Cormier is a former Olympic wrestler with big power in his hands and a rock solid chin. Johnson is largely considered the best power-puncher in the sport and most of the opponents he hits end up hitting the deck.

After losing to Cormier, Johnson registered three knockouts in three fights to get another shot at the title. He most recently wrecked Glover Texeira in just 13 seconds. We all want to see Jones back in the cage, but this makes for a pretty exciting fight while we wait for him to be reinstated.

I don’t think Cormier can beat Jones, but he continues to take potshots at him with his mouth. Jon has brought this on himself, but Cormier seizes every opportunity to poke and prod the former champ. Case in point:

Fight Canceled Due to Fake Breasts

UFC newcomer Pearl Gonzalez is the former XFC strawweight champion and 6-1 in her pro career. I was very much looking forward to her UFC debut against Cynthia Calvillo, who’s fresh off a win in her UFC debut.

Friday morning, that bout was canceled because Gonzalez has breast implants and apparently in New York, that goes against athletic commission regulations. It seems silly, but not surprising from the state that tried to get large sodas banned. The Statue of Liberty resides in New York, but New York is anything but about liberty these days. The nanny state strikes yet again, it doesn’t get much more pathetic.

By the late afternoon, however, the New York State Athletic Commission changed its ruling.

Here is a statement I was provided by the NYSAC regarding Pearl Gonzalez pic.twitter.com/AaY6OlBOgG

“I’ve never heard of such a thing,” Gonzalez told reporters after the ruling. “I put it in my paperwork. I never lied about it. They asked me if I had surgery and I told them. I was surprised. Nothing I can do about it now. I’m just riding my wave and enjoying this.”

A NYSAC spokesperson said that the fight had never been pulled by the card, but was under review “based on information presented at the weigh-in earlier today.” So the fight is back on, and we’ll see if any of this drama affected Gonzalez or Calvillo in their preparation.

Pro sports can be very cruel, but there is none crueler than the fight game, where each loss is extremely painful and innately personal. Weidman suffered what looked to me to be a life-altering beating at the hands of Luke Rockhold at UFC 194, an embarrassing loss where Weidman was absolutely wrecked and lost the title.

He came back just shy of a year later at UFC 205, and there was much hype around his return because it was the first-ever UFC in New York and Weidman was fighting the dynamic and powerful Yoel Romero, the former Olympic wrestler from Cuba. Weidman was knocked out again, this time by a well-placed flying knee from Romero.

Nobody on this card — nobody in MMA — needs a win like Weidman does Saturday night. Unfortunately, I don’t think he will get it.

Weidman will fight Gegard Mousasi, who is one of the most underrated, underpublicized fighters in the sport. He’s excelled across the world in both kickboxing and MMA and holds an astounding record of 41-6. He’s beaten some of the greats of the sport, both past and present. Consider this list of fighters he’s beaten: Vitor Belfort, Dan Henderson, Jacare Souza, Mark Hunt, Gary Goodridge, Babalu Sobral, Melvin Manhoef, and Uriah Hall, to name a few.

Mousasi is equally adept on his feet or the ground and he knows Weidman will try to take him down. He’s seen much more advanced striking than Weidman can offer and knows his opponent’s style well. I think Mousasi knocks him out, and perhaps Weidman moves up to 205 after this fight.

Your UFC 210 Nickname Battle of the Week

I certainly wouldn’t include either of the two fighters nicknamed “The Predator” on this card. Child, please. We need a moratorium on some MMA nicknames. No more Pitbulls, Phenoms, or Predators. We’ll start there, mmkay? I strive to bring you the best nicknames each and every week, as the card allows.

If Katlyn “Blonde Fighter” Chookagian’s opponent had a nickname, they might have received this week’s honor. But instead, we are going to go with Will “Ill Will” Brooks and Charles “Do Bronx” Oliveira.

Oliveira’s nickname has nothing to do with New York, but it does have to do with where he came from. He told UFC.com the derivation of his nickname came from other fighters at the gym he trained at in Brazil. When he would walk into the gym they would say, there’s that “kid from Do Bronx,” which means “the ghetto” in Portuguese.

Brooks is the former Bellator champion and it turns out he will be fighting an Oliveira for the second straight time. He fought Alex “Cowboy” Oliveira in his last fight and suffered his first loss in the UFC. Do Bronx has lost three of his last four, so he badly needs a win, even though he remains in the top-10 rankings at lightweight. Brooks’ nickname is not only a play on words and his first name, it also describes his intentions. This fight will lead off the pay-per-view portion of the event and should be a good one.

Five other fighters you’ll want to watch at UFC 210.