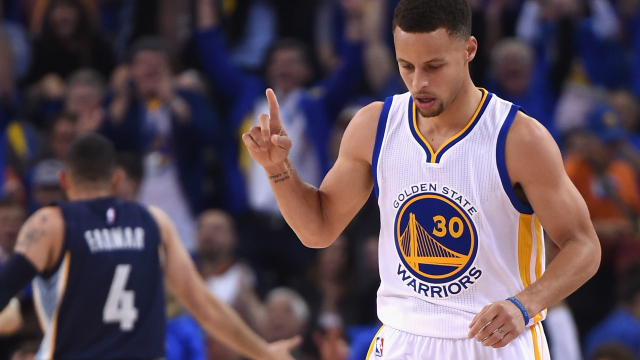 For almost two full NBA seasons, the Golden State Warriors have struggled. Not on the court — that part comes pretty easy to these guys. It’s in the court of public opinion that the Warriors and their fans have fought for respect, acknowledgment, and admiration.

With that in mind, it really was perfect that on the night when they reached the seemingly impossible mountaintop represented by their 73rd win — the night when Stephen Curry nailed his 402nd three-pointer of the season, breaking his own single-season record by over 40 percent — they would be overshadowed by Kobe Bryant’s last drink from the fountain of youth.

Heading into Wednesday’s game against the Memphis Grizzlies, it looked like the night would be all Warriors. ESPN had moved the Lakers game to ESPN2 to clear the main channel for the Warriors’ coronation. That angered some Kobe fans, but they had to admit the Golden State-Memphis game would be much more compelling to most people.

It was… for three quarters.

Curry hit the last of his 10 three-pointers with five seconds to go in the third, giving him 46 points for the night and a seat on the bench to watch the fourth quarter for the 18th time this season. The Warriors led by 19, and while that margin has not always meant smooth sailing for the W’s, they’ve lost only one game over the past two years in which they held a 15-point lead.

Time to see what Kobe was up to.

Well, lookie here! With 22 at the half against the Utah Jazz, Kobe then scored 15 in the third as the Lakers cut a 15-point halftime deficit to nine.

Let’s see what happens — the Warriors’ backups aren’t that interesting.

Well, you know the rest: Kobe scored 23 in the fourth quarter, including 15 during the last three minutes, bringing the Lakers all the way back to victory. He even had four assists.

So rather than the Warriors owning the postgame airwaves, they had to share them, and not with “12 points and four rebounds” Kobe, but with “60 points and a +7” Kobe, which is a significant difference.

What does it mean? To the Warriors, it’s par for the course. For their fans, it’s maddening, because Wednesday night was supposed to be another step on the road to total vindication, a destination they were denied last year. You remember: The Spurs lost, the Clippers lost; the Grizzlies, Rockets and Cavs were all injured.

Wednesday was supposed to be a night for the Warriors to claim something — not just for the history books, but for the eyes of a nation which wondered just how good the team was a year ago, when it never had to face the Clippers and didn’t have to play the Cavs in the NBA Finals with a healthy Kevin Love and Kyrie Irving on the floor at the same time.

Wednesday was supposed to be a public and unshared moment of validation for the Warriors… but Mamba Day got in the way.

Nevertheless, no one who follows the Warriors can control Wednesday’s outside circumstances. The only worthwhile response is to appreciate what this team has done. 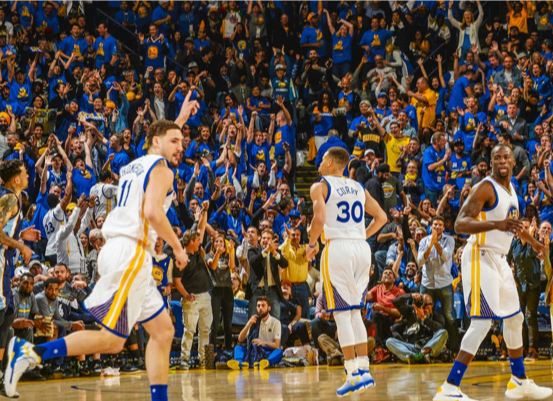 Last season, longtime Golden State Warriors observers such as myself were overcome by the success of our team. To see the team you have watched all your life go from routinely terrible, to not bad, to NBA champion — in the course of just five years — is pretty amazing. We soaked up every event, every game, every postgame press conference, never knowing if we’d have the experience again.

The history of every professional sport in every country is littered with the stories of great teams that fell apart seemingly overnight. A key injury, a lost free agent, a coaching change, or even just a “championship hangover” can relegate a team to the middle of the pack.

So imagine our glee, our over-the-moon pleasure, seeing this team achieve what it has this season! Yes, we all get it: If they don’t win the championship, this season will not have the same resonance in our heads and hearts.

We’ve actually had some experience with that specific burden in the Bay Area. The Warriors won the NBA title in 1975, then increased their win total from 48 games to 59, a franchise record until last year. However, they lost in the Western Conference Finals in 1976.

“No problem,” we all thought. “Wait until next year!”

Next year, it turned out, was 39 years away.

So we’re pretty jacked in 2016 about 73 wins. It’s an incredible achievement, and I don’t believe its pursuit will affect whether the Warriors get the 16 additional wins required to lug the Larry O’Brien Trophy around the country again. At their best, or even 75 percent of their best, they will not lose four times to any team in the NBA, including the Spurs and the Cavaliers. 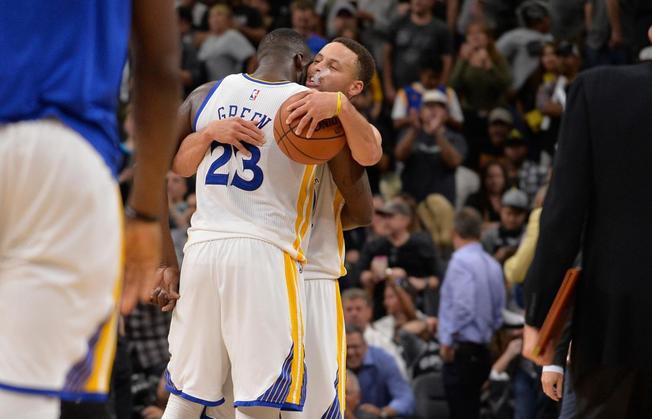 More about the NBA playoffs will be written in future days, but for now, simply know this: The Dubs will face challenges. During the playoffs, teams have a chance to adjust to opponents in ways that are impossible during the regular season. Unfortunately for the rest of the league, that skill set for the Warriors is incredibly strong. Their in-series adjustments against Memphis and Cleveland last year turned 2-1 deficits into 4-2 victories with Game 6 celebrations on the other guys’ home floors.

Now that I’ve established that Everyman Warrior Fan possesses an unusual mixture of satisfaction, wariness and confidence — though being resentful of Kobe Bryant for stealing the spotlight on Wednesday — allow me to use some numbers to try to put into perspective exactly what 73 wins mean, irrespective of the outcome of the playoffs and Finals:

In the last 25 years, only three teams won the NBA championship and then improved their records the following year:

In the years prior to 1991, more such instances exist (including the 1976 Warriors), but overall, the records weren’t as gaudy. Teams won championships after winning 40-something games (such as the 1978 Bullets), so to improve the next year wasn’t as big a deal. Let’s therefore focus on the three teams above.

The 2006 Spurs increased their win total by four games, the 2002 Lakers by two games, and the 1992 Bulls improved by six games. That matches what the Warriors did this year. The difference is that the Bulls’ six-game increase pushed them from 61 to 67. The Warriors increased from 67 to 73. The Warriors used the best increase by a championship team in the last 25 years to get the best record ever in the NBA.

Last season, the Warriors became the sixth team in NBA history to finish with 67 wins. All but one, the 2007 Dallas Mavericks, went on to win the NBA title. Neither of those six teams, except the Warriors, improved their record the next season. The Warriors’ six-game improvement translated into an .890 winning percentage, up from .817.

When the Bulls set the all-time wins record in 1996, they were chasing the 69 victories the Lakers put up in 1972. The Bulls entered April 62-8, only needing to go 7-5 to match the Lakers. It was assumed that they would do it, and yet they still wobbled in that final month, losing two games at home and — according to Steve Kerr — playing pretty poorly in a few games they won. They were able to break the record in their 78th game, then won two out of three to push the record to 72 wins.

The Warriors, in trying to get to 72, had much less margin for error. They were a little ahead of the Bulls’ pace almost all season, but knew that if they lost an extra game or two, it could cost them a shot at the record. The difference between trying to get 70 and 73 over the course of 82 games is a big deal.

They were able to do it, though, and the best part for the 2015-16 Warriors is that they didn’t have to sell their collective souls to make it happen.

Kerr was able to keep his rotations pretty steady, and while there were certainly some rocky times, I think that had more to do with the absence of Andre Iguodala for 17 games and the subsequent need to get him back in the lineup. He missed 17 games, two of which the Warriors lost, and at least 10 others which were close games into the fourth quarter. His first game back was the home loss to Minnesota, in which he played only 18 minutes and was not nearly as effective as usual.

At the very end of this column from Dec. 15, I wrote that the Warriors would hit 73. I had seen this team win games in so many different ways that I could not envision a path to 10 losses. The Warriors’ player development under Steve Kerr and his staff has always been leaps and bounds beyond any other team in the NBA. That, as much as anything, enabled the Warriors to win at any tempo and with any style, in a pure street fight or in a shotmaker’s paradise.

That essential quality — being able to win any kind of game under any circumstance — is exactly what carried the Warriors through late-season road back-to-backs, when the team showed signs of fraying at the edges and began to feel to feel the pressure of chasing history.

This is a history which was only accentuated by Steph Curry’s own landmark accomplishments on Wednesday night.

The reigning MVP — whom not ONE other general manager said he’d build his team around in a preseason league-wide survey — became the first player EVER to average 50/40/90 (field goal percentage / 3-point percentage / free throw percentage) while averaging at least 30 points per game. Curry also surpassed the 400 three-point barrier this season. Not one man had ever hit as many as 300 in any prior season.

Kobe’s 60 points might have dominated the news cycle Wednesday night, but there’s no question which team and which player dominated the 2015-16 NBA regular season.