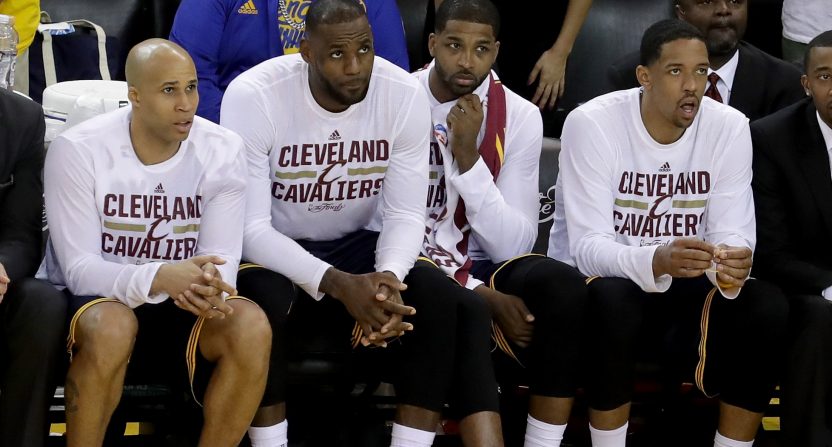 Over the last couple years in the NBA, top teams in the league that were 99.9% sure they would be making the playoffs have rested players repeatedly throughout the season. On Monday, ESPN reported that commissioner Adam Silver wants to do something about it.

This season it seems like the Golden State Warriors, Cleveland Cavaliers and San Antonio Spurs have taken to resting their stars more than ever before. For example on March 11 during a road game against the Spurs, the Warriors’ Klay Thompson, Draymond Green, Steph Curry and Andre Iguodala all didn’t play due to “rest.” San Antonio won 107-85.

According to ESPN, Silver has had enough. In a memo the Commissioner sent to owners, Silver described the resting trend as “an extremely significant issue for our league.”

Here’s more information on the memo, including the threat of “significant penalties”:

“In the memo, Silver informed teams that the issue will be a prime topic of discussion at the next NBA Board of Governors meeting April 6 in New York and warned of ‎’significant penalties’ for teams that don’t abide by the league’s standing rules for providing ‎’notice to the league office, their opponent, and the media immediately upon a determination that a player will not participate in a game due to rest.'”

Silver went on to say it is “unacceptable” for team owners to not be involved in major decision making when it comes to resting key players in big games. Especially when those decisions being made by the head coach and general manager can seriously impact “fans and business partners” as well as the NBA’s reputation.

It makes sense why the look would look to curb this trend. The Spurs have rested players in key games for several years now, but the tactic seems to be spreading.

Now, multiple teams are resting their best players even in meaningful games late in the season. The Warriors have a slim two-game lead over the Spurs for the top seed in the Western Conference Playoffs, and if they hadn’t rested four of its stars, they could have a three-game lead.

The thing is, the NBA isn’t only bothered when star players are rested during crucial conference games. This past Saturday, the Cavaliers were in Los Angeles to face the Clippers. L.A. won easily 108-78 because LeBron James, Kyrie Irving, and Kevin Love all sat out due to “rest.”

After Cleveland announced it was planning on sitting its three best players in a high-profile game on national television, Cavs’ GM David Griffin got a phone call from the league office.

“I’m not overly concerned about the perception of it,” Griffin told ESPN. “We literally had one guy rest tonight, and everybody else was reasonably injured, so I don’t feel like we did anything terribly egregious.”

It’s interesting for ESPN to report on this because of the network’s massive TV deal with the NBA. Due to that relationship, ESPN released a statement about the resting trend.

“As always, our aim is to serve NBA fans with the best matchups involving the league’s top stars and we share the fans’ disappointment. We understand this is a complex issue and we’re working closely with the NBA to best address it going forward from a media partnership standpoint,” the statement said.

“Sorry, ABC. This wasn’t intentional. It’s serious. So no need to have setbacks to play one game on national TV. We’re being smart about it,” Lue said.

At the end of the day, the NBA will be fine revenue-wise, and a couple star players sitting out big games won’t impact the league’s bottom line dramatically.

However, reputation-wise it is a little startling compared to star players in other sports. During mid-to-late September, don’t expect the Washington Nationals to suddenly stop playing Bryce Harper. Also don’t expect the New England Patriots to suddenly start benching Tom Brady for the second half from Week 14 on. This is a uniquely NBA problem.