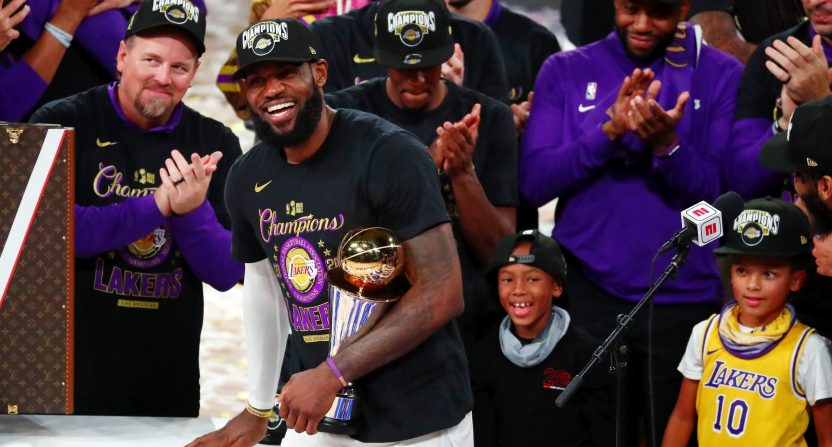 This Los Angeles Lakers campaign, the one that ended nearly a calendar year after it started, will go down as one of the most turbulent, climactic sports seasons ever. Off the court, everything that could go wrong did go wrong, in an often tragic and incomprehensible way. That they’re champions at the end of it is incredible.

The Lakers’ title will be remembered for a lot of things. It will, perhaps most memorably, be the one they got for Kobe Bryant. They gave grieving fans something to enjoy, and celebrated Kobe’s legacy in a way that the man himself would most appreciate: by hunkering down, isolating, and winning a gritty, nothing-comes-easy championship.

It will be the one where Anthony Davis got his first ring. Davis emerged in the playoffs as something beyond the first-team All-NBA player we knew him as before. His talent maximized all at once, something we rarely see with even the best superstars. He produced countless clutch moments and dominated on defense like almost no player has in the postseason.

We’ll remember the supporting cast, which was so frequently maligned. On paper, the Lakers had nothing approaching the depth of other contenders. But it coalesced, somehow, with everyone buying in and performing their role. The third-best player debate proved moot; as it turned out, that title was bestowed on a different guy every game, from Danny Green in that first game against the Clippers to Rajon Rondo in the Game 6 blowout.

Perhaps most of all, though, it will be remembered for LeBron James, who has had the highest possible expectations at every moment of his adult life and has delivered every single time. This is his fourth championship and fourth Finals MVP, adding to a resume that will always be compared to Michael Jordan. At the very least, everyone agrees that he is a top-two player of all time, and more and more will likely grant him the GOAT title.

Beyond those debates, though, another LeBron storyline has emerged: is this the longest prime ever? Rachel Nichols brought up the question in the post-game championship interview. It is notable, considering that LeBron is a couple months from age 36 and has been to nine of the last 10 NBA Finals. His longevity and durability is astounding.

It may be weird to say, but even this LeBron, which remains absurdly athletic with the ability to get to the rim at will, is past his prime. I mean that as a compliment. That this version, a Finals MVP LeBron that puts up 28-8-8 in his sleep, isn’t even his true prime is a testament to the varied stages of his career, and the height of his true peak. By now, in his 17th-year, he’s not as bouncy and fast and in-your-face athletic as he was in his younger days. That means he suffers a bit defensively, even as he takes on big assignments and plays a huge role in the league’s best defense. His standards are high.

I would prefer to think of this championship as defined by the late-career LeBron James, the one that combined a still-superhuman athleticism with the maximum basketball genius. He has always been able to control the court, extending influence everywhere all the time, but this season, he had his finger on the pulse of games like never before. This late-career evolution was in some ways predictable, and also fascinating.

He took on the role of full-time point guard for the first time after years of pioneering a modern version of point forward. This was a natural endpoint for LeBron, who has always been at his most comfortable as a facilitator. He yearns to involve all of his teammates and lift everyone up. This un-Jordanlike desire to make friends has been at the center of his career, going back to St. Vincent-St. Mary’s High School, when he created countless easy buckets for his vastly-inferior-at-basketball best friends.

Criticism always comes when he passes instead of shoots. Given that people were used to “killer instinct” praise for Jordan and Kobe, that criticism was inevitable. But LeBron was different. He’s a basketball artist, not a brute-force killer, and he thrives on making the best play every time. That’s the joy of watching LeBron: you know he’s the best on the floor, and you know he’s going to make the right decision every time. He’s a known basketball genius, with a photographic memory and an innate sense of where everyone is all the time. That means that instead of taking contested shots, he’s going to attack some specific element of a defense and find a pass if a pass is there. If it’s not, he’ll score himself.

The LeBron point guard experience was must-watch television every night throughout the regular season. It felt like appointment viewing because of the universal awareness that this all-time great, this once-in-a-lifetime specimen, was nearing the end. You wanted to savor every moment. The IQ, always the attribute that set him apart, was on display every night as he walked the ball up the floor and played point guard.

I, an East Coast dweller who only occasionally stayed up for the late games, looked forward to browsing box scores the next morning to see how many assists LeBron piled up. I pulled up League Pass and watched as many LeBron minutes as I could, taking joy in both the rampages to the rim and the expert skip passes he fired across the court. Noting assists as they came — “oh, a lob to Javale! There’s another!” — was a profoundly enjoyable experience. It can be easy to take these things for granted. It may be a while until we see a player who approaches LeBron’s basketball genius again, so I took every opportunity to enjoy it while it’s here.

The best parts of watching Point Guard LeBron throughout the season were the moments when he discovered some new way of making a play. Watching the all-seeing broadcast angle gives basketball viewers a familiarity with where LeBron usually passes the ball. He’ll come off a screen and dart passes to the corner, or bounce a precise feed to a roller. He’ll heave long-balls across the court, somehow knowing that Davis is down there, and he’ll wade into the lane, waiting until the precise moment a certain defender rotates and then hitting a shooter.

Sometimes, he’ll see some cutter or some kick-out pass that even the television viewer, able to see the whole court from above, couldn’t have anticipated. That is the best moment, when you’re in disbelief that he saw Alex Caruso down by the bucket or Kentavious Caldwell-Pope on the wing.

The regular season was a fun ride, even through the obstacles and the tragedies. The Lakers, after a preseason of dealing with a diplomatic crisis, sprinted out to the top of the Western Conference. They were joyful and almost carefree like no LeBron team ever has been. There was none of the day-to-day stress, melodrama, or thinly-veiled in-fighting that defined the urgent Cavs years.

A crew of misfits came together. Dwight Howard, of all people, became a useful backup center, knowing his role from the beginning and never extending himself too far. Javale McGee started at center throughout the regular season and did the same job. Rajon Rondo, a journeyman who has been criticized in the past for being a coach-killer, became a backup ball-handler who was waiting until the playoffs to really show up. Caruso grew quickly into a defensive stopper who could competently pass on offense, making him a favorite of LeBron.

Throughout, they felt like the second or third-best team to most observers, outside of optimistic Lakers fans. The Clippers, even as injuries took them out of contention for the top West spot, were the best on-paper team. Kawhi Leonard looked like he might be the best player on the planet, and head-to-head matchups came to favor the Clippers. The Milwaukee Bucks beat the Lakers in the teams’ first matchup and produced a regular season for the ages.

I was content to enjoy the Lakers as they were: a winning regular season team, led by the late-career genius of a great, that may not have enough to beat the Clippers in a seven-game series. Even in March, when the Lakers produced a weekend of wins over both the Clippers and Bucks, I had my doubts. Evidently, I underestimated this Lakers team.

I don’t need to tell the story of the regular season obstacles and tragedies. Kobe’s passing became a motivator for the team, the chance to win a ring for an LA hero. The pandemic interrupted the regular season and called the playoffs into doubt. The bubble was a difficult animal from the start, with no families there initially and players having to get used to playing without fans.

As they had before, the Lakers persevered. They avoided the Clippers, who collapsed in dramatic fashion against the Nuggets, and saw an invigorated Miami Heat team dispatch the Bucks with ease. In the Finals, they prevailed over the scrappy Heat, who pulled out all the stops. Jimmy Butler produced one of the most memorable Finals performances in recent NBA history. The Lakers won in six, and LeBron earned his Finals MVP. Fittingly, he ended it with a triple-double.

Perhaps there’s more to come from LeBron James, more to be added to the debates and the controversy. This Lakers team can only get better. For now, let’s appreciate what we’ve just witnessed: a display of basketball genius that we haven’t seen before. LeBron is one of a kind, a great who lifts the collective into something more. In Davis, he had the perfect partner-in-crime, his most talented teammate ever.

At times, it felt in doubt. But the journey, the long and winding road that ended up here, was thoroughly enjoyable. A late-career LeBron, as an all-knowing orchestrator, delivered the fourth title of his career. Let’s appreciate it while it’s here.