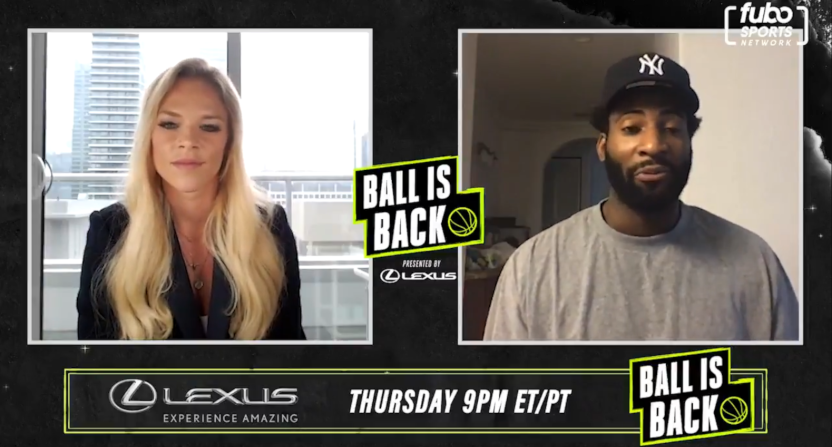 While most of the current NBA coverage is focused on the 22 teams in the Orlando bubble, there are still some interesting things going on with the eight teams outside that bubble and with their players. There’s been discussion of a second bubble for the “Delete Eight” teams to play, but that hasn’t happened so far, and doesn’t look particularly likely to happen right now. But many of those teams are still hosting their own scrimmages, and their players are still occasionally commenting on what’s going on with the league. And a particularly interesting comment there comes from Andre Drummond of the Cleveland Cavaliers in an interview with Julie Stewart-Binks for a fubo Sports Network special about the NBA’s return to play.

The Cavaliers are one of the eight teams not included in the NBA’s Orlando bubble, but they’ve been holding their own scrimmages recently. Drummond has put up some notable performances there, and his 2020-21 status hasn’t really seemed too much in dispute until now. He was traded to the Cavaliers by the Detroit Pistons in February, and he has a $28.75 million option for the 2020-21 season, which he said in June he planned to exercise, saying “Yeah, it’s going to be hard to give up, so you can count on me being in Cleveland still. …I definitely will be in Cleveland.” But when talking to Stewart-Binks this week for fubo Sports Network’s “Ball Is Back” special (set to air on their digital network Thursday at 9 p.m. ET/PT) , Drummond said “Right now, I am a free agent,” and indicated he’s still very much considering whether to pick up that option or not (his deadline there is October 17). Here’s that clip:

NBA is back, but not every player is on the court. @AndreDrummond tells me this is a time for self-reflection:
“Right now I am a free agent…talking to my family about what I want to do next." #NBATwitter pic.twitter.com/ZMRL71492l

Drummond says there “Right now, I am a free agent, so it’s just talking to my family about what I want to do next. And working on my body, working on my game, getting ready to play to the best of my ability, wherever I’m at. Right now I’m in Cleveland, so that’s my main focus right now, worrying about what I can do in Cleveland. And that’s really it; I’ve got a lot of time to take care of my body, all the knots and bruises I had, just working those out, working out weak parts of my body and just trying to get better.” Stewart-Binks then asks him about the option, and he says “At the moment, I’m content to be in Cleveland with my family again. I go through everything with my mom and my little sisters, who I really confide in for these decisions. So mainly right now, we’re comfortable where we are, but obviously the conversation needs to be had when it’s time to worry about free agency.”

Also worth considering here are Drummond’s comments on how the NBA bubble in Orlando seems challenging, but how he still he wishes he was there. Here’s a clip on that:

Tomorrow @JSB_TV talks to @AndreDrummond about his "bubble envy" 😂 Watch the "Ball Is Back" special presented by @Lexus THURSDAY at 9pm ET / PT on @fuboTV or stream it FREE on https://t.co/4BjxBgLnqL pic.twitter.com/GxstIIKyMy

“A lot of my ex-teammates are there. Reggie Jackson, Stanley Johnson are in the bubble right now as we speak. And we FaceTime all the time, and they’re like ‘Bro, it’s crazy, you can’t do anything. Once you’re done working out, it’s like you’re literally locked in your room until the next day. You can’t do anything, you can’t leave, you can’t walk anywhere. If you do anything, it’s supervised, you’ve got to have your mask on at all times.”

“So they’re taking the necessary precautions to make sure everyone is safe, and at least they’re having somewhat of a good time; they’re golfing, they’re fishing, they’re doing different activities to keep guys engaged. Because I know it’s hard to not be able to do the things you’d like to do outside, like maybe go to a restaurant, go to a lounge and have a glass of wine or something. But I think the NBA’s doing a really good job of bringing everything to them and keeping them there. But I’d rather be down there than be at home. I’d rather play than sit at home and watch them play. Because I love the game.”

There are a few interesting things here. For one, it’s notable that Drummond appears to be rethinking his previously-stated plan to pick up that option. That doesn’t mean he won’t do it ($28.75 million for one year is a lot of money), and there are still months before he has to make a decision, but it’s certainly notable that he now seems to be reconsidering just automatically doing that. And the NBA bubble may be having an impact there; the league’s restart plan, and its current failure to execute a “second bubble” for the eight teams that didn’t qualify for the Orlando bubble, can certainly be seen as making those teams feel lesser. It’s quite understandable that competitive athletes like Drummond currently feel like they’re missing out by not being included in that bubble. And in Drummond’s particular case, it sure looks like that could possibly lead to him opting out and choosing to join a higher-ranked team.