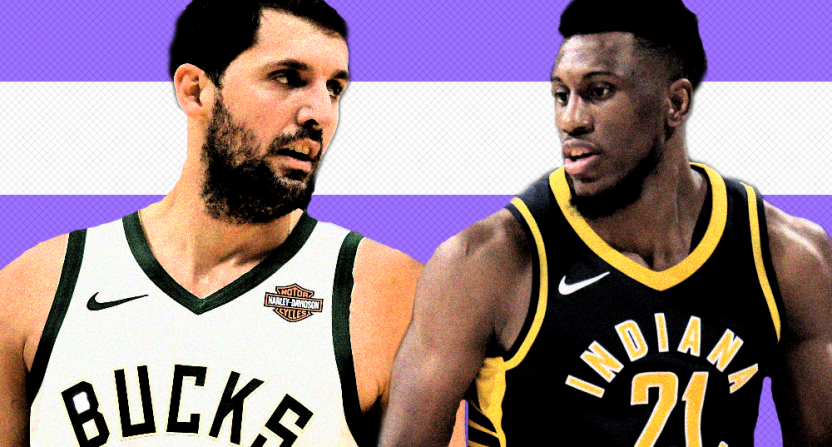 When looking ahead at free agency, it is easy to solely think about where the big-name players will be heading. But, outside the big names like Kevin Durant, Kyrie Irving, and Klay Thompson, there are some solid non-star players who could be had a bargain prices and make a big impact for teams. Here are the best potential value players on the free agent market.

Jordan experienced somewhat of a lost season in his first season outside L.A., as the 6’11” center appeared in 50 games with the Dallas Mavericks before getting traded to the New York Knicks in the Kristaps Porzingis deal. After starting 19 games with the Knicks, Jordan finished the season on the bench as New York tanked concluded the season.

Despite the forgettable season, Jordan is still an effective starting center in the NBA. In 69 games split between the Mavs and Knicks, he managed to be a double-double machine, averaging 11.0 points, 13.1 rebounds and 1.1 blocks per game, along with an efficient 64 percent field goal rate. Jordan, who once ranked as the worst free throw shooter in the league, averaged a career-best 70.5 percent from the stripe. Even as a traditional center who can not shoot from distance, Jordan has value to a team looking for a high-efficiency scorer who can defend the paint.

For a contending team like Portland, Boston or even Golden State, Jordan would represent a low-cost gamble who could provide stability at the five. He will try to rebuild his value and would be wise to sign a one-year contract in order to do so.

The Bucks gave up four second-round picks and former lottery pick Thon Maker to bring in the Montenegro-born sharpshooter and had to be disappointed with their return in the deal, despite it being a slam dunk at the time. Mirotic struggled with a thumb injury and never found his footing in the playoffs. In 14 playoff games, Mirotic shot just 29 percent from three, while chipping in just 9.5 points per game.

Teams should not let Mirotic’s postseason struggles sway them from taking a small risk on a player who is essentially a perfect sixth man/fringe starter. He’s a fine three-point shooter who rebounds at an above-average clip. In 2018-19, he averaged 15.2 points and 7.4 rebounds split between the Bucks and New Orleans Pelicans. While his injury history is a red flag, after shooting his way out of a big contract in the playoffs, Mirotic should be available at a reasonable price. For many teams, especially those trying to improve their bench, he could be a huge bargain on a one or two-year deal.

Young has made a career of never being “the guy” for a team, but has always been a versatile, high-impact player who is perfectly fine taking the backseat and doing all the little things right.

The 30-year-old is coming off another quietly impressive season with the Indiana Pacers. Young averaged 12.6 points, 6.5 rebounds and 2.5 assists per game, while shooting 52.7 percent from the field and 34.9 percent from deep. He is an above-average defender who can match up against multiple positions. In summary, Young is a fantastic basketball player who is underrated and extremely valuable in a variety of ways.

Young will be in demand, even as a non-star player, so teams looking for a one-year bargain will be disappointed. However, contending teams looking for a stable veteran who can shoot and play D, signing Young to a three-year contract in the $30 million range would be a wise investment.

After a slow start in the NBA after going undrafted out of USC, Dedmon has really turned into a quality center.

In 2018-19, Dedmon continued to evolve his game, averaging 10.8 points per game, 7.5 rebounds, 1.1 blocks per game, while shooting 38 percent from the three and 81 percent from the free throw line. All-in-all, Dedmon is a sold veteran who does enough right things on the floor to be a very good bench player or fringe starter. Tons of teams would love to add a player who can shoot from deep, protect the rim, and do enough elsewhere to be valuable.

The Hawks scored a bargain by getting Dedmon on a two-year, $14.1 million deal in the 2017 offseason. Even at a slight pay increase, Dedmon can bring great value and minutes. Even if he is just a stop-gap solution or brought in a one-year deal, Dedmon can ball.

Hood has had an interesting NBA career in his first six seasons in the NBA. In Utah, he emerged as a fine scorer and three-point shooter, but was never really provided security as the long-term option as shooting guard. After losing his starting job to rookie Donovan Mitchell, Hood was traded to Cleveland in 2017-18, as help for LeBron James. Hood failed to make an impact in the playoffs and the Cavaliers dealt him to Portland this season where after an OK season, Hood excelled in the postseason against the Denver Nuggets.

Hood proved, at the very least, he is capable of hitting big shots even in a reserve role. The Blazers would be wise to bring him back and the fit is a good one for Hood. But, for a player whose career was floundering despite okay production, Hood has proven he belongs and can make an impact at a smaller cost.