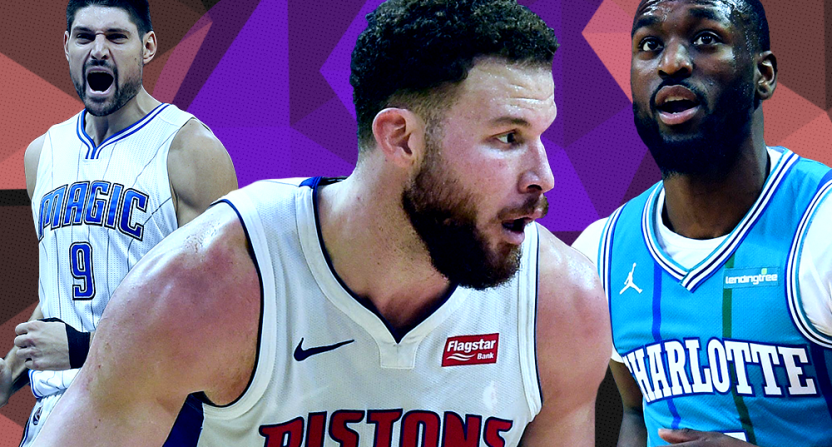 In recent history, securing the Eastern Conference’s seventh and eighth seeds has been a battle between sub-.500 teams. Unlike the West, which saw a 46-win Denver Nuggets squad finish ninth and miss the playoffs last season, the path to the playoffs has always been slightly easier in the East. In 2018-19, it’s been more of the same, as five teams with a losing record are battling for the last two spots. Here’s how the race is shaping up for playoff bubble teams in the East.

Charlotte somehow ranks 1st in the Southeast Division and 7th in the East, despite sitting three games under .500.

The Hornets are staying afloat thanks to the sublime play of All-Star point guard Kemba Walker. In his eighth season with the franchise, Walker is enjoying a career-best season, averaging 24.9 points, 5.6 assists, and 4.4 rebounds. He’s by far the team’s most important player. Unfortunately, Walker’s got next to little to no help as he’s surrounded by a bunch of role players. Charlotte didn’t do anything at the trade deadline to provide immediate help, meaning the pending unrestricted free agent is once again forced to carry the team on his back.

As the Hornets are built right now, they’ll make the playoffs for the first time since 2015-16. However, it’s doubtful they’ll make it out of the first round for the first time in franchise history. Walker’s got the ability to steal a few games by himself, but without a second star, the chances they slay a dragon and take down a top seed is unlikely.

Under new coach Dwane Casey, the Pistons have maximized the play of power forward Blake Griffin, who’s averaging a career-best 26.3 points per game and 5.4 assists. Meanwhile, center Andre Drummond has taken a bigger offensive role. Both players are having very good seasons, but Detroit hasn’t been able to sustain momentum at any point this season to be considered serious contenders.

The Pistons offense, while slightly improved from one season ago, is still below average. Detroit ranks second-last in field goal percentage, shooting just 43.8 percent as a team. Point guard Reggie Jackson isn’t a great facilitator, and neither guards Bruce Brown or Luke Kennard should be NBA starters at this point in their young careers. Adding sharpshooter Wayne Ellington on the buyout market was a savvy move, but it’s not enough for Detroit to hold onto a playoff spot. The Pistons doesn’t have the depth or secondary scoring needed to be competitive.

Out of every team on this list, I’ve got the most faith in the Heat. Miami is well-coached under Erik Spoelstra, has talent throughout its roster, and is getting key players back from injury at the right time.

The Heat are in good shape for the most part. Point guard Goran Dragic is set to return after undergoing knee surgery in December. Adding an All-Star of his caliber to the starting lineup will be a big boost for Miami. Shooting guard Josh Richardson is a two-way dynamo, whose team-leading 17.6 points per game is a nice surprise. 22-year-old Justise Winslow has settled in nicely as the team’s point forward. Center Hassan Whiteside remains enigmatic, but is a game-changer when he’s locked in. There’s a lot to like about Pat Riley’s team. The Heat have the necessary veteran talent to win a dogfight for a playoff spot in the season’s final stretch run.

Getting fully healthy at the right time is big for Miami. Unless a top player suffers a season-ending injury, it seems inevitable the Heat will sneak into the playoffs.

Orlando’s up-and-down season under new coach Steve Clifford has been a whirlwind to follow. At one point in late January, the Magic sat 10 games under .500 and appeared out of the race. But thanks to a five-game winning streak entering the All-Star break, they’re right back in the hunt for a late playoff seed.

Led by All-Star center Nikola Vucevic, Orlando is just half a game back of the Pistons. The Magic feature some high-flying young talent, with forwards Aaron Gordon and Jonathan Isaac bringing an athletic edge to the team. Gordon’s seen his points per game dip, but he’s playing much more efficiently under Clifford. Isaac’s been more of a mixed bag, but he’s got tremendous defensive potential and has come into his own in February, averaging nearly 15 points and three blocks. Vucevic remains a below-average defensive player, but the 28-year-old has added three-point range along with his already excellent rebounding and passing skills.

Orlando lacks a true point guard and it’ll be challenging to compete with D.J. Augustin leading the offense. Giving up a protected first-round pick to Philadelphia for Markelle Fultz, an intriguing reclamation project, is a worthy gamble, although counting on him this season would be foolish. The Magic are arriving at the right time, but it still might be too soon for them to compete. If you like their chances as a long-shot to make the playoffs, put your money on the line with NJ Sports betting.

Despite a hellish season filled with injuries, drama, and plenty of losing, Washington is just three-and-a-half games back of the Pistons.

The Wizards are the Bradley Beal show. The 25-year-old is doing his best to keep Washington above water, averaging 25.1 points per game. With point guard John Wall out for the season and center Dwight Howard appearing in just nine games so far, Beal has been asked to do a lot under Scott Brooks’ depleted offense. Bringing in forwards Bobby Portis and Jabari Parker will help the offense from completely bottoming out, but there’s not much to like on the Wizards roster.

Washington is more likely to continue freefalling than qualify for the playoffs. They’ve got too many injuries, new faces and below-average players taking up big minutes. Tanking the rest of the season and praying for a high lottery pick is the best case scenario for the Wizards.