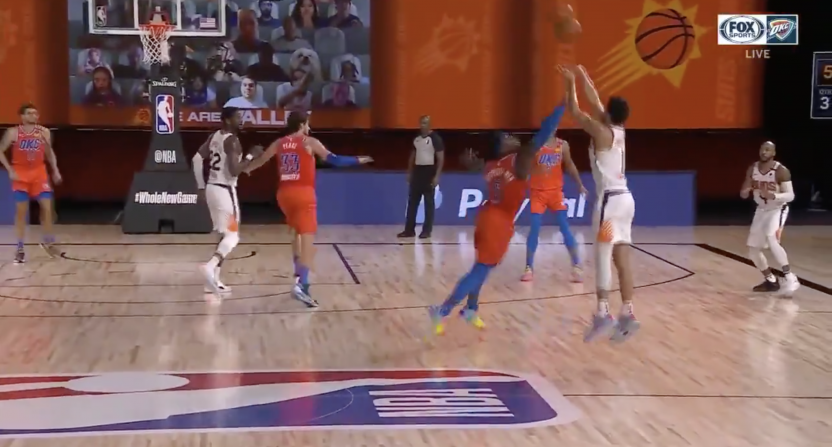 Devin Booker has been a beast since the NBA restarted their season. The Phoenix Suns shooting guard has been averaging 26 points per game and exceeded that total in four of their past five games in the bubble, including two games where he scored 35. As a result, the Suns won all five of their games.

On Monday, the Suns continued their momentum with a blowout win against the Thunder. But midway through the third quarter, Booker launched a colossal shot from deep that all but defied physics.

DEVIN BOOKER FROM THE LOGO 🔥 pic.twitter.com/i6KBHwY7xD

It wasn’t so much that Booker hit a three just a few feet within half court, but he drained the shot with so much precision that the net barely moved. In fact, if you saw the shot live and didn’t slow down the video, it looked like Booker missed the shot and the ball bounced off the backboard. Instead, breaking it down frame by frame, you can see a little movement of the net as if a slight breeze made it twitch.

Booker matched his personal bubble best 35 point performance as the Suns got their sixth win out of six from Orlando. The Suns are in 10th but are one game out of the final playoff spot with two games left. The Suns have momentum and add in the uncertainty of everyone playing in a bubble; if they can get in the playoffs, they might be a dark horse for the title.