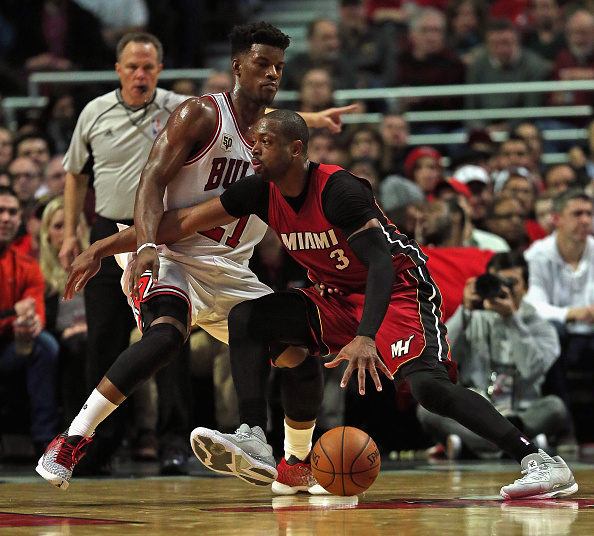 Editor’s Note: Scroll down the page for updates on the signing/news.

The Vertical’s Adrian Wojnarowski reports that 12-time All-Star Dwyane Wade has chosen to sign with the Chicago Bulls.

Dwyane Wade has informed the Bulls he plans to sign a deal with them, sources tell @TheVertical. Bulls sending out contracts now.

ESPN’s Jorge Sedano reports that the deal is for two years and $47 million.

To clear cap space to allow for the Wade move, the Bulls are working to trade Jose Calderon (acquired in the Derrick Rose trade) and Mike Dunleavy Jr.

Bulls have traction a deal to move Jose Calderon & working on separate deals for Mike Dunleavy, sources said. Would clear about 25M in space

ESPN’s Marc Stein reports that the Brooklyn Nets could be the team trading for Calderon:

Brooklyn has emerged as a potential trade partner for Chicago to send Jose Calderon, according to league sources — Marc Stein (@ESPNSteinLine) July 7, 2016

And reports say that the Milwaukee Bucks and Cleveland Cavaliers are interested in Dunleavy. Dunleavy to the Cavs would certainly be interesting:

The Bulls are in talks to send Mike Dunleavy to the Cavs, sources told ESPN

Milwaukee is in hot pursuit of Mike Dunleavy via trade, league sources say, and Brooklyn is strongly in the lead to trade for Jose Calderon — Marc Stein (@ESPNSteinLine) July 7, 2016

But the only story anyone really cares about of course is Wade to the Bulls, and it sure appears it’s going to happen. Wade is from Chicago, and the Bulls have attempted to bring him back to his hometown time after time. Well, it appears they have him now, but the timing is pretty odd given the Bulls’ roster construction.

If the Bulls keep Jimmy Butler, they will likely have a starting lineup of the recently signed Rajon Rondo at point guard, Wade at shooting guard, Butler at small forward, Taj Gibson at power forward, and Robin Lopez (acquired in the Rose trade) at center.

They appear to be in that “good” but not “great” area, and being in the middle in the NBA tends to be a bad idea, unless you have a lot of youth that leads you to believe the team is trending towards being a championship contender eventually. Wade is 34 and Rondo is 30, so it’s hard to see the Bulls being such a team, but perhaps they have some more moves on the way.

They’re also getting away from the original plan with head coach Fred Hoiberg when they hired him away from Iowa State last season.

What is happening to the idea of Hoiball? — Nick Friedell (@NickFriedell) July 7, 2016

But, they’ll at least be more interesting!

Remains to be seen if Bulls win a lot more games, but they would definitely be interesting every day. https://t.co/MteROG0QJM — Nick Friedell (@NickFriedell) July 7, 2016

We’ll have a bigger reaction to this news coming on the site soon, so stay tuned.

Okay, this has all happened in like five minutes…

Wade has apparently informed the Heat that he is indeed leaving them for the Bulls.

According to CSN Chicago Bulls insider Vincent Goodwill, the Bulls have confirmed the deal. It’s for two years and $47.5 million.

Mike Dunleavy Jr. is going to the Cleveland Cavaliers as speculated:

Mike Dunleavy has been informed he has been traded to the Cavaliers. — K.C. Johnson (@KCJHoop) July 7, 2016

The Bulls have sent Jose Calderon to the Los Angeles Lakers.

Lakers swoop in and convince Chicago to trade them Jose Calderon ahead of Brooklyn on a wild night, according to league sources

Heat center Hassan Whiteside — who just signed a four-year, $98 million with Miami — responded to the news:

Mike Dunleavy has been informed he has been traded to the Cavaliers. — K.C. Johnson (@KCJHoop) July 7, 2016