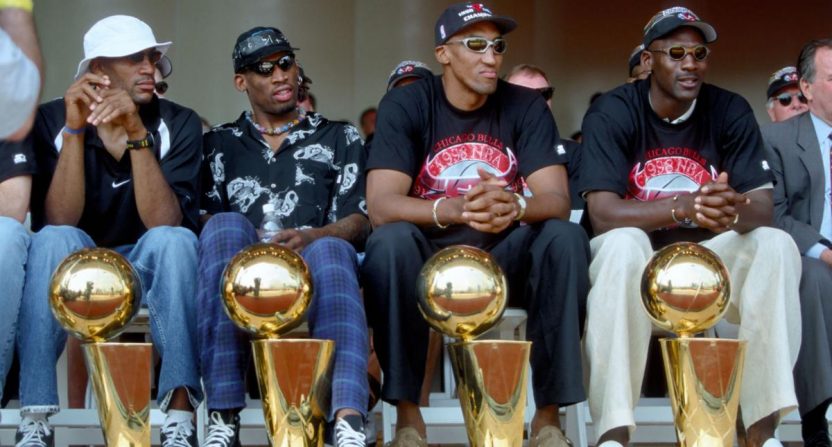 For legends, there’s always a little mythology blended into reality. Few athletes have benefited from that more than Michael Jordan. We never saw his gradual decline with the Chicago Bulls, so his excellence is frozen in time.

We remember the greatness while conveniently forgetting the setbacks. Before Jordan won six championships in six NBA Finals appearances, he began his career with three straight first-round losses, including getting swept twice.

The assumption by some is that if Jordan never retired (the first time), the Bulls would’ve won eight in a row. Prosperous given the wear, tear, and mental fatigue of repeated deep playoff runs. Plus, it diminishes the accomplishments of Hakeem Olajuwon and the Houston Rockets, who won championships in 1994 and 1995 during much of Jordan’s absence.

A more interesting question: would Chicago have won another title if the team hadn’t been broken up?

Assuming Jordan, Scottie Pippen, and head coach Phil Jackson all returned, going back-to-back-to-back-to-back would’ve been something not accomplished since the Boston Celtics reeled off eight in a row (1959-1966). Back then there were only 10 teams in the league.

Jordan was coming off his fifth MVP, but would’ve turned 36 when the playoffs started. In Jordan’s final season with the Bulls, his player efficiency rating (25.2) and value over replacement player rating (7.1) were career-worsts with Chicago.

Pippen never made another All-Star team after foot surgery in 1997. Dennis Rodman played only 35 games over the next few years before retiring in 2000. (For the record, Rodman said the Bulls would’ve “easily” won a fourth consecutive championship.)

But even if Chicago general manager Jerry Krause brought the band back together, there were significant obstacles. Among them, the San Antonio Spurs (more on the Spurs in a moment).

The 1998-99 NBA season started in February because a labor dispute led to a lengthy lockout. A schedule that normally was 82 games was reduced to 50 with no All-Star game. Squeezing all that over 90 days resulted in plenty of back-to-back games, which took a toll on a lot of bodies. The quality of play suffered because there was little time to practice and players had to work themselves back into shape quickly.

This grind would’ve been murder on the Bulls, who had played 58 playoffs games over the previous three years. No such thing as load management back then. Chicago would’ve had to play its stars as much as possible to secure homecourt advantage. When the regular season concluded, the eight playoff teams in the East were separated by just six games, topped by the Miami Heat (33-17), the Indiana Pacers (33-17), and the Orlando Magic (33-17). The Heat were the top seed due to tiebreakers.

As Michael Jordan addresses the end of the Bulls dynasty, our guys debate what would have happened if that Chicago team had been allowed to stay together. And it gets HEATED over how a Rodman-Tim Duncan matchup would have gone in the 1999 Finals had the Bulls made it.😂 pic.twitter.com/Lzo3nqQa76

That’s as deep as the East has ever been in the postseason. That also helped to explain what happened in a wild first round that saw the 8th-seeded New York Knicks upset Miami in a best-of-five series. Allan Houston’s game-winning basket stunned the Heat. Those Knicks would eventually become the first No. 8 seed to reach the NBA Finals.

That wasn’t the only first-round shocker. Orlando was eliminated in four games by the one-man-gang of Allen Iverson. How would the Bulls have fared in this field? Matchup-wise, they probably would’ve at least reached the conference finals.

However, getting past the Knicks or the Indiana Pacers — who both had given them trouble in the past — would’ve been difficult. In the previous season, Indiana had come the closest to beating the Bulls, losing 4-3 in the 1998 Eastern Conference Finals. They were the only team to push Jordan to an elimination game during the second three-peat.

For argument’s sake, let’s say Chicago displayed the heart of a champion to reach the NBA Finals. There was still the not-so-small matter of Tim Duncan and David Robinson.

San Antonio tied with the Utah Jazz for the NBA’s best record (37-13). But the Spurs — who started the season 6-8 — led the league in scoring margin (+8.1) and had the best defensive rating (95.0). They steamrolled through the postseason, losing only twice on the way to winning their first NBA championship over the upstart Knicks.

Replace the plucky Knicks with the Bulls. What would’ve happened? Duncan is one of the three best players of the post-Jordan era, along with LeBron James and Kobe Bryant. He was only 23 when he won the first of his five championships. Duncan was an offensive threat as well as a terror on defense. With Duncan and Robinson, the Spurs had a pair of mobile seven-foot stalwarts that nobody could match up against.

The Spurs probably wouldn’t have been able to stop Jordan, but they would’ve made him a less efficient player. The Spurs held New York to 39.2 percent shooting and allowed 79.8 points in the NBA Finals over five games. Yes, the Bulls would’ve fared better, but it still would’ve been a struggle for them to score. And Duncan, the 1999 Finals MVP, would not have been intimidated by Rodman’s antics.

Even B.J. Armstrong — a member of Chicago’s first three-peat — realizes this.

“Technically speaking, Tim Duncan, to me, is a player that is really just probably as unique of a talent that I’ve seen in the NBA,” Armstrong said. “And if you’re going to have a player that’s going to be able to counter a talent like a Michael Jordan, who was almost like flawless technically in his game, Tim Duncan can do that because he could do things — not only offensively but defensively — to control the game.”

A Bulls vs. Spurs is a hypothetical with no answer. For a generation, Jordan will always be the guy who could never be beat when it mattered most.

The mythology of Jordan always wins.