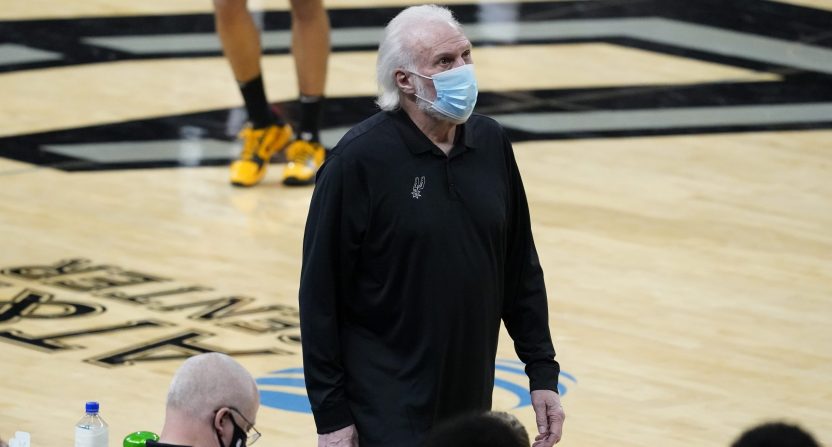 The decision was met with plenty of questioning, seeing as how  the COVID-19 pandemic is still a very real thing going on. And one person to heavily criticize the decision was a high-profile NBA coach in the state of Texas.

More Pop: "Basically you're saying, 'if you get infected, you die, that's the way it goes. We got to open up,' This is really ridiculous.' #KSATsports #KSATnews pic.twitter.com/sWX0y1t1rO

“It’s a mystifying decision. It puts a lot of business in a tough spot, I think. They’re trying to do a good job keeping everybody safe. Of course they want to open up. But, getting rid of masks just seems ignorant to me. It’s like we have to instant gratification. We have to act like the pandemic is over. We already went through this once. And now we’re going to do it again? I mean, when you go into those restaurants, you take your mask off anyway when you’re eating. So, how hard it can it be? Now they’re going to have to talk to people that come in. And the people that didn’t want to wear masks in the first place, how do the businesses get them to wear masks? Well, they don’t have to. So now there will be more infections, one would think. But when all of a sudden we act like it’s over with, and all of the science tells us the opposite, you’re basically saying, ‘You get infected and you die? That’s the way it goes. We gotta open up!’ That’s not the way to do it. This is really ridiculous.”

There have also been concerns about what this means for college basketball tournaments coming up in Texas. The women’s NCAA Tournament and men’s NIT are being held there.

The NIT should not be held in Texas. https://t.co/qJnXoP4nRV

The NCAA released the following statement on Tuesday night:

“Protecting the health and safety of participants and fans during NCAA championships remains the NCAA’s priority. In preparation for the 2021 Division I Women’s Basketball Championship, the National Invitation Tournament (NIT), as well as other championships, the NCAA has monitored ongoing COVID-19 developments in all states since the onset of the pandemic. We will continue to work closely with local medical authorities, the NCAA COVID-19 Medical Advisory Group, and CDC guidelines to determine the appropriate health and safety protocols for our events.”

The NCAA needs figure that out quickly, with these tournaments less than three weeks away. And it will likely be difficult to get everybody onboard (especially when it comes to the NIT).