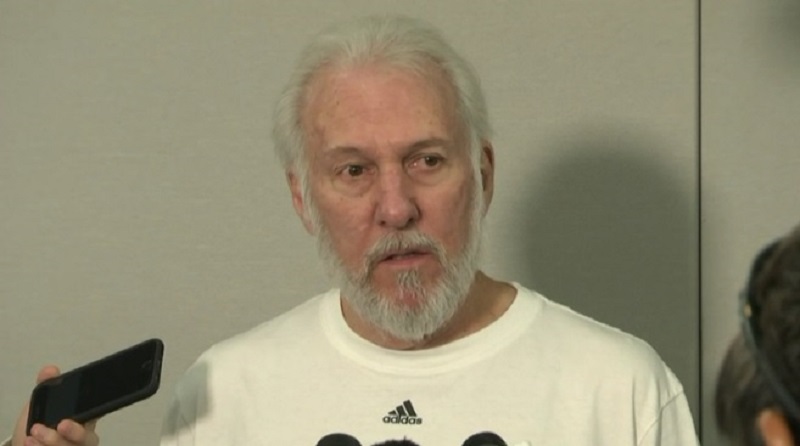 A day after watching his San Antonio Spurs blow a 25-point lead to the Golden State Warriors in Game 1 of the Western Conference Finals, Gregg Popovich was rather testy when speaking to the media Monday afternoon. This was to be expected, as Popovich is never one to hide his emotions too well. Those emotions got especially testy when discussing the injury to star Kawhi Leonard after contact with Golden State’s Zaza Pachulia.

After being asked for a status update on Leonard (undergoing an MRI), an awkward pause was broken by a question that rankled Popovich, and away we go.

At one point in responding to a question from the media, Popovich compared Pachulia’s history and role in the injury to Leonard as manslaughter, which seemed a tad excessive. Nonetheless, Popovich used this opportunity to go on a signature rant that was first focused on the history of Pachulia before serving a bit of a rebuttal to ridiculous questions from the media.

First, his history lesson about Pachulia’s peculiar history connected to injuries to players…

“Ask David West, his current teammate, how things went when Zaza was playing for Dallas and he and David got into it. And then think about the history he’s had and what that means to a team, what happened last night. A totally unnatural close out that the league has outlawed years ago and pays great attention to it. And Kawhi’s not there, and you want to know how we feel about it. You want to know if that lessens our chances or not.”

At this point, Popovich shifted gears and seemed to make a point out of how ridiculous a question about the team’s feelings is at this time.

“We’re playing very possibly the best team in the league… and 9.75 people out of 10 figured the Warriors will beat the Spurs. Well, we’ve had a pretty damn good season, we’ve played fairly well in the playoffs, and I think we’re getting better, and we were up 23 points in the third quarter against Golden State, and Kawhi goes down like that, and you want to know if our chances are less? And you want to know how we feel? That’s how we feel.”

Popovich ended his rant with a dry sense of humor, turning to the reporter and asking if he had a follow-up question. But he wasn’t done. Popovich continued his rant and made a reference to manslaughter in comparison.

Popovich:Who gives a damn abt what his intent was? Ever hear of manslaughter? U still go to jail when ur texting, end up killing somebody pic.twitter.com/a9ZtTn2O1u

“Because he has this history, it can’t just be, oh, it was inadvertent. Who gives a damn about what his intent was. You ever heard of manslaughter? You still go to jail, I think, when you’re texting and you end up killing someone. All I care is what I saw. All I care about is what happened. And the history there exacerbates the whole situation and makes me very, very angry. Nobody wants to do anything that would put anyone else in danger for a game or a career. This guy’s history is different.”

Popovich knows the media is just doing his job. He just doesn’t back down from letting you know when he thinks a question may be a waste of time. It’s not like he’s fielding questions from Sports Illustrated for Kids reporters all day.

But he does have some good points. The role Pachulia played in the injury to Leonard is fair to analyze and question, whether you believe it an actual accident or looked suspicious. It is also fair to put reporters in their place when they ask silly questions just to get a quote to fill a story.