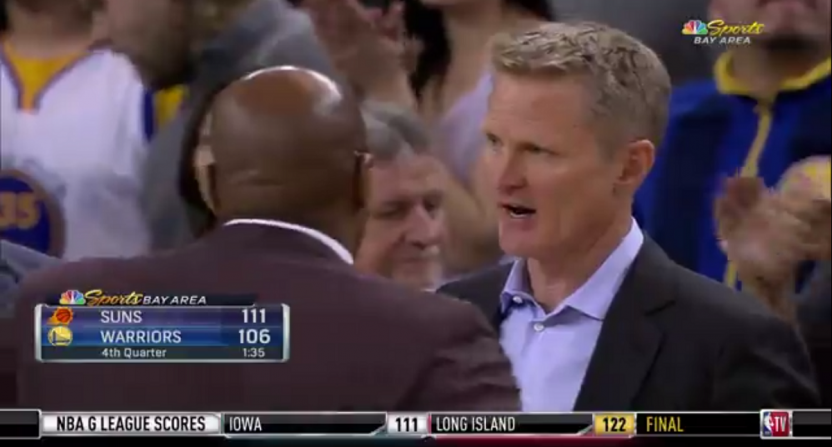 When DeMarcus Cousins signed with Golden State last offseason, it caused an immediate avalanche of stories proclaiming the upcoming NBA season over before it began.

Things haven’t necessarily played out that way, though, and lately things have been especially rough, as Golden State fell last night to the Suns of all teams, 115-111. That loss dropped Golden State to 4-6 in their last ten games. The overall picture is still good; Golden State has a 1.5 game cushion on Denver for the #1 seed in the West, and a bigger lead over third, and there’s no way they’re not still the favorites. (And the best team in the East, Milwaukee, suffered a 114-105 loss on Monday against Phoneix, too. Break up the Suns!)

There are, however, a few cracks starting to show, and it’s possible they’ve been more internally driven than anything. Tonight, for example, we had Steve Kerr, caught on camera saying something that looks very much like “I’m so fucking tired of Draymond…”

"I'm so f***ing tired of Draymond" is what that looks like, @Mikeweisberg, but we don't know if anything came after that as they cut to commercial pic.twitter.com/Y7I7snkrXj

The full play leading up to that moment is here:

If you’re wondering what the cause was, it’s not readily apparent, beyond general frustration with Draymond’s antics. The sequence leading up to that moment was actually a decent one for Green; he had a block that led to the runout resulting in Golden State’s free throws.

Green actually avoided technical and flagrant fouls while putting up 6 points, 11 rebounds, and 8 assists, along with no turnovers. He was -4 for the night, yes, and he’s not had a great season, but it’s telling that Kerr is (again, probably, we don’t have a professional lip-reader on staff) so fed up with all of the ancillary Draymond Green things. The barking at refs, the constant complaining, the occasional verbal diatribe directed at one of his teammates, including one of the best players in the league. A lot of us are pretty fucking tired of Draymond too, and we don’t even have to deal with him all the time!

The Warriors have a quick turnaround, taking on the Rockets in Houston on Wednesday night, so there’s a chance Golden State might lose five out of eleven games; as it is, they now sit with a 45-21 record, a far cry from the 73-win season just a few years ago. Of course, there’s every chance that they’ll just turn things on in the playoffs and win another title. But for now, it’s nice to be reminded that they’re maybe not invincible. It would be a nice change of pace.

1 thought on “Is this Steve Kerr saying “I’m so f-cking tired of Draymond” during the Warriors loss to the Suns?”