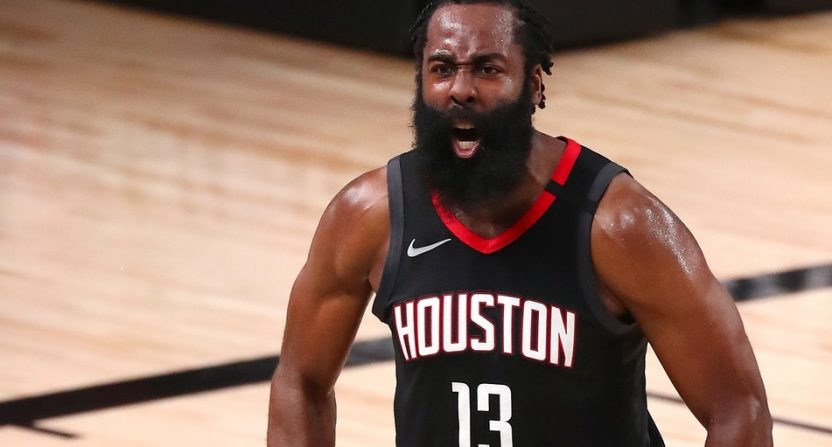 Wednesday night’s NBA Playoffs Game 7 was setting itself up to be a nightmare for the Houston Rockets. The Rockets were in jeopardy of losing to the Oklahoma City Thunder, the very team that provided the missing piece that could presumably push Houston closer to contending for an NBA championship.

Chris Paul, part of the package traded to Oklahoma City in exchange for Russell Westbrook, was winning on the scoreboard. Many thought the veteran was virtually finished after the grind of 15 NBA seasons. Instead, he had a resurgent season and was on the verge of beating his former team. The Thunder was going to win the trade that dealt away their star and presumably started a rebuilding project.

Westbrook and James Harden (who began his career with the Thunder) faced a surprising, embarrassing playoff loss. The Rockets looked dominant in establishing a 2-0 series lead. They won a decisive Game 5 by 34 points. Yet the superstar backcourt with aspirations of challenging for a title was about to fall short, the last of eight teams to lose a first-round playoff series and leave the Orlando bubble.

Perhaps even worse, Westbrook and Harden were being upstaged by rookie Luguentz Dort, scoring 30 points in the game of his life when Oklahoma City needed it the most.

A Game 7 is when a star player is supposed to cement his reputation, perhaps build his legend. He’s supposed to carry his team to victory, maybe taking his game to a higher level in the process. Yet with the Rockets’ season on the line, Harden appeared to be crumbling under the pressure. He shot 4-for-15 Wednesday night, only 1-for-9 from three-point range. Houston would have to win in spite of him, not because of him.

That performance followed up a lack of leadership and assertiveness at the end of Game 6, which the Rockets lost, 104-100. As The Big Lead’s Kyle Koster pointed out, Harden shied away from the kind of moment most players covet. He had a chance to win the game, yet apparently didn’t want the ball, didn’t want the responsibility of winning or losing the game in his hands. This is not what a great player does.

Harden himself had harsh words for his poor shooting night in a postgame interview with ESPN’s Cassidy Hubbarth.

No one would question that Harden is a great scorer. But the game’s truly elite players do everything to help their team win; they play strong defense, they mix it up near the basket to get tough rebounds, they set up teammates to make plays. Harden’s greatest asset is his ability to rack up points and if he’s not doing that, does he have any other use on the court?

On most nights, observers and fans would likely say no. Harden certainly isn’t known for his defense, often only standing on that side of the court because the opponent has the ball. Yet with the Rockets facing elimination and an offseason of questions after losing to Oklahoma City and former teammate Paul, he made a key play that his team needed. And it didn’t involve a step-back three-pointer or drive to the basket.

Harden made… a great defensive play. There’s video proof of it!

With the Thunder working for a possible game-winning shot, Dort had what looked like an open three. But Harden quickly covered the distance from the paint to the three-point wing and blocked the shot attempt.

Even better, he showed quick reflexes in jumping out of the way when Dort tried to bounce the ball off him to maintain possession. Suddenly, the rookie’s 30-point breakout didn’t matter. It was a game-winning play for Harden, one that didn’t involve taking a shot. This time, he won the game by preventing one.

Later on SportsCenter, analyst Tim Legler showed that Harden’s blocked shot wasn’t the only example of good defense on that play. He also stayed close to Steven Adams to prevent him from cutting to the basket or getting open for a quick pass or lob.

Harden’s block may end up being as memorable a highlight from his 2019-20 season — or his career — as any spectacular shot he made or explosive scoring performance he compiled. The play will certainly be included in any montage of Houston’s playoff run.

Though it wasn’t pretty and didn’t come easily, Harden’s effort showed that maybe he is indeed making progress in his game and can lead the Rockets in other ways. He doesn’t always have to carry the scoring burden. Wednesday night, that was left to Westbrook (who scored 20 points), Robert Covington, and Eric Gordon (both of whom scored 21). Making a play doesn’t always involve scoring a key basket.

With the Los Angeles Lakers awaiting in the next round, the Rockets’ postseason path may be reaching a dead end. It’s probably not encouraging that Houston needed seven games to get past the Thunder. Meanwhile, LeBron James and the Lakers will have had nearly a week of rest after eliminating the Trail Blazers last Saturday and waiting for the winner of the Thunder-Rockets series.

Maybe that means the Lakers will be rested and fresh, and will roll over a tired Rockets team. Or they could be rusty and sluggish after that much time off while Houston is still running hot after fighting to continue its season. Could the Rockets sneak out a win in Game 1 on Friday?

Hey, it could happen — especially if James Harden is doing more than scoring to help his team win.