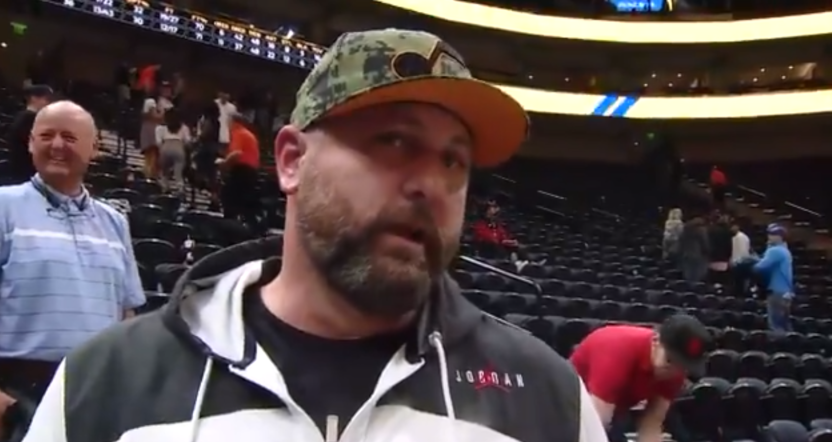 The situation involving Oklahoma City Thunder point guard Russell Westbrook and Utah Jazz fan Shane Keisel has taken some twists. On Monday night, it was mostly Westbrook’s comments towards Keisel of “I’ll fuck you up. You and your wife, I’ll fuck you up” that were caught on video and got wide attention. But even then, players like Westbrook’s teammate Patrick Patterson weighed in on what Keisel was allegedly saying to start that confrontation, with Patterson describing it as Keisel saying “Get down on your knees like you’re used to” (which Westbrook also said was the case in a post-game interview.) And after an investigation, the Jazz announced Tuesday that they’ve banned Keisel from all future events at their arena:

Statement from the Utah Jazz: pic.twitter.com/L3eYolvrpq

The NBA announced a fine for Westbrook as well:

Westbrook has been fined $25k for confrontation w/fan in Utah. pic.twitter.com/Cc3uPAzKsQ

And the key parts from their transcript:

“We were just two men, I thought, having fun initially,” Keisel said after the game. “It turned to, I mean the guy is F-wording everything. He’s just a classless dude.”

…Keisel claimed he said, “Sit down and ice your knees, bro.”

…Keisel said there were no racial remarks made from him or anyone around him. He said he’s filing a lawsuit against Russell Westbrook, and he’s has been advised to shut down his social media accounts.

Keisel said he and his family have been receiving death threats, and the picture painted of him is wrong.

We’ll see if anything comes of this lawsuit. But it’s certainly interesting that the Jazz have already banned Keisel based off their own investigation. And it’s notable that Jazz star Donovan Mitchell sent out his own statement Tuesday saying he was “personally hurt” by the incident Monday night, and that “racism and hate speech hurts us all.”

We have to do better… we will do better! 💯 pic.twitter.com/heBO4z66TY

Meanwhile, NBPA executive director Michelle Roberts told The Undefeated’s Marc J. Spears that she wants a zero-tolerance policy on fan behavior across the league, and that the arenas “have to do a better job of insulating our players”:

Quote from @MRobertsNBPA to @TheUndefeated on the need for a “zero tolerance policy” for fans at NBA games after Russell Westbrook incident in Utah. pic.twitter.com/OC2z6Of1Oa

It seems likely this incident, and the fallout from it, will be a hot topic of NBA discussion for quite a while.