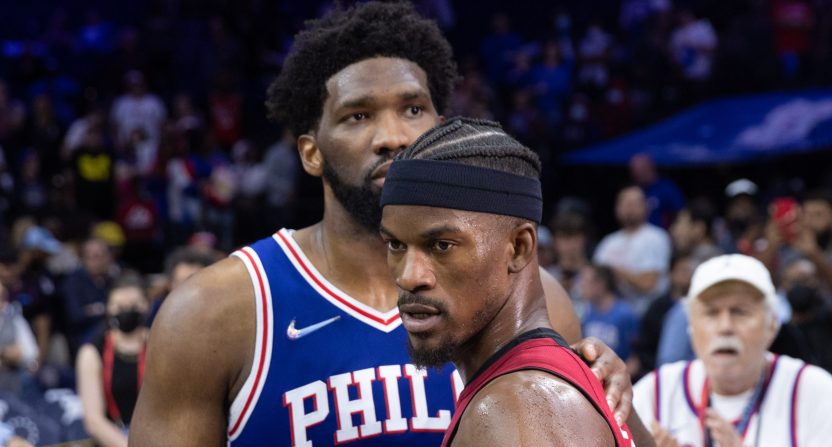 In the minutes after his Miami Heat defeated the Philadelphia 76ers 99-90 in a series-clinching Game 6, Miami star Jimmy Butler made some notable comments.

Shortly after Miami’s Game 6 win, Butler was asked what he said to Joel Embiid in an interview. Butler started his response normally, saying, “That I love him — I’m proud of him.”

Then, he shifted to a more surprising answer.

Immediately before joining the Heat for the 2019-20 season, Butler played for the 76ers. His stay there was not long. Butler played only 55 games for Philadelphia and wasn’t even there for the entire season. But his time with the 76ers left an impression on Butler.

Jimmy Butler shouts out Joel Embiid and says he wishes he still played with him. pic.twitter.com/Q1MF8VUi3F

“Yes, yes, yes. I still wish I was on this team. I definitely love the Miami Heat, though. I’m glad that I’m here. But I’ve got so much respect and love for Joel Embiid.”

Those comments caught the attention of NBA fans.

Twist the dagger why don't you Jim.. 😢 https://t.co/hlnHhFfjzX

This, right here, should cause ownership to FIRE EVERYBODY.
Right here.
Because I bet you money that Embiid feels the same. https://t.co/jszILdtZhz

“Yes I still wish I was on his team.” — Jimmy Butler on Joel Embiid.

After Miami’s Game 5 victory, ESPN’s Ramona Shelburne revisited Philadelphia’s decision to trade Butler in 2019. Indeed, Ben Simmons reportedly had a lot to do with the move.

“While Butler and Embiid bonded and have remained friends, Simmons became disenfranchised by Butler’s playing and leadership style,” Shelburne wrote. “Both needed the ball in their hands, which pitted them against each other. Eventually it got to the point the organization felt it needed to choose between them, according to team sources, and it chose Simmons.”

Clearly, keeping Simmons was not the right choice. He was abysmal during the 76ers loss to the Atlanta Hawks in the 2021 postseason. After not playing at all for Philadelphia during the 2021-22 season, Simmons was traded to the Brooklyn Nets — where he’s causing similar headaches.

If there was any thought that trading Simmons might help the 76ers fans put that era of the franchise’s history in the rear-view mirror, these comments brought those wounds back.