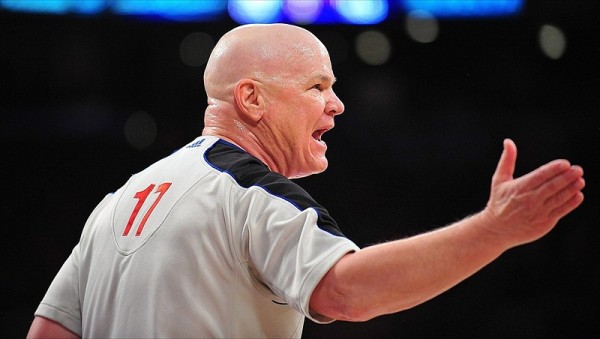 Joey Crawford works in a profession which demands the ability to stay calm in highly stressful situations.

One time, Crawford definitely lost his cool. In his chosen profession, even one profound lapse can affect the way a public figure is viewed by a whole generation of fans:

Yet, Crawford’s infamous blow-up at Tim Duncan in 2007 was a single moment, balanced against many decades of high-level NBA officiating. While younger NBA fans — especially San Antonio Spur fans — will always hold a negative view of the most conspicuous bald-headed official in sports, older generations recognize Crawford as one of the foremost officials in the game.

This presence — a fixture in NBA arenas since the latter half of the 1970s — will not officiate league games beyond 2016.

Crawford told Jack McCaffery of the Delaware County (Pa.) Daily Times late Friday night that he will retire as an NBA official at the end of this season. Crawford’s career will end one season short of a 40th go-round in the league. His 39 years match the tenure of Dick Bavetta, who became just the third NBA official to make the Basketball Hall of Fame last September.

Crawford could become the fourth. He’s left that much of an imprint on the NBA. Hall of Famer or not, he rates as a legendary figure alongside the three refs who have attained an eternal place in Springfield, Massachusetts: Bavetta, Earl Strom, and Mendy Rudolph.

It’s fascinating to contemplate the ways (and the extents to which) the various sports recognize referees. The NFL has enshrined one person who had any particularly central connection to officiating in professional football — it’s a person you have almost certainly never heard of. Some of the great football officials of past decades, the foremost example being Jim Tunney, are not in the Pro Football Hall of Fame. The NFL has become the most exclusive (or perhaps, one could legitimately say, non-inclusive) American sports league in terms of honoring its greatest officials.

Major League Baseball has welcomed 10 umpires into its Hall of Fame. That’s larger than the number of NBA officials in the Basketball Hall of Fame, but given that the World Series began in 1903, more than four full decades before the NBA came into existence, it’s not that large a total.

Speaking of MLB umpires, Joey Crawford became a sports official because it ran in his family to become one. Brother Jerry Crawford was an established baseball umpire for decades, and father Shag Crawford began a highly successful career in the majors, beginning in 1956. If you think you care about rules and officiating in sports, you’ve probably never had the dinner-table conversations (especially the father-and-son conversations) which flowed through the Crawford household in the second half of the 20th century.

Joey Crawford was so driven to become an NBA official — and evidently so extremely good at the craft — that he achieved his goal in his mid-20s. Crawford’s career began when John Havlicek was still playing in the NBA, just before Magic Johnson and Larry Bird arrived. It will end with Steph Curry, LeBron James, Andrew Wiggins, and Karl-Anthony Towns.

Between Hondo and Towns, Crawford has been both a witness to and a participant in history. Yes, he flipped out and lost all control with Tim Duncan almost nine full years ago, to the point that officiating Spurs games never again seemed like a good idea. That having been acknowledged, Crawford is a figure who belongs on the Mount Rushmore of NBA referees.

It’s true in announcing — the giants many of us grew up with, people such as Pat Summerall, Keith Jackson, Vin Scully, and Ernie Harwell, are either gone or about to retire. Al Michaels and Doc Emrick remain conspicuous on a number of levels, one of them being that we know they’ll never be fully replaced when they step down.

It’s much the same with NBA officials. Rudolph, Strom and Bavetta were unforgettable figures, and as much as fans don’t want officials to make themselves part of the game (a true-enough statement), greatness is recognized even in a profession where not being recognized is the ultimate virtue.

Referees know they’ve worked a great game if fans, players and coaches leave the building without thinking about the three men who blew the whistles. Officiating is a craft in which anonymity is a sign of excellence when understood properly.

Yet, the people who have followed the NBA for decades know that Joey Crawford, large and in charge for 39 seasons of pro basketball, will never be fully replaced.

It will be fascinating to see how he exits — a game in which his calls are utterly unremarked upon is the way he’d prefer to end a long and fruitful career in the NBA.