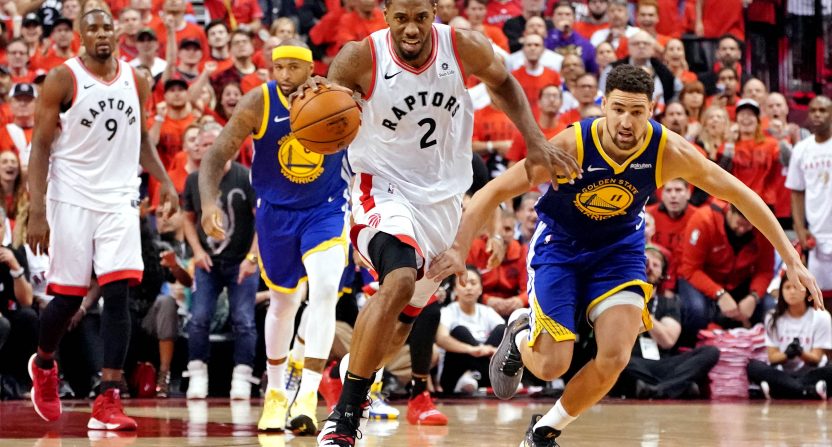 The Toronto Raptors are in the midst of challenging the mighty Golden State Warriors in the NBA Finals. The Raptors, revitalized after years of disappointing playoff performances, have invigorated the city of Toronto and drawn seas of Jurassic red to the Air Canada Centre, which suddenly symbolizes the city’s love for its basketball team instead of for its hockey team.

Toronto’s newfound vitality has reverberated through ESPN broadcasts. Drake flails around courtside in support of his hometown team. Fans chant “De-fense” and “Let’s go Raptors” without the usual prompting from stadium speakers. Broadcasters struggle to yell over the crowd noise, which envelops the opposing team.

The spark that has ignited this Toronto fire? Silent killer Kawhi Leonard, the famously quiet and introverted superstar who is the primary reason for the Raptors’ breakthrough, and yet has none of the personality traits one would expect from a famous athlete.

It is an alluring dichotomy. When Kawhi burrows underneath defenders and hits contested midrange shots, or drills stepback threes over double-teams, the crowd erupts for its star, but Kawhi jogs back as though nothing unusual has happened. The arena shakes for a transcendent player, yet that transcendent player feels no need to celebrate whatever difficult and important thing he has just done. His exultant scream after beating the 76ers with the first Game 7 buzzer beater in NBA history, in front of that rollicking crowd, was a shocking and unusual sight.

TV cameras are not accustomed to panning over to a game-breaking basketball player and seeing a blank expression. LeBron James roars, thumps his chest, and throws down towering, triumphant slam dunks. Stephen Curry joyously smiles and dances around the court when he hits threes. Kevin Durant is notoriously emotional and seems to enjoy his on-court accomplishments primarily as the perfect foil to his many critics. Kawhi, however, simply jogs back and maybe high-fives a teammate.

Superstars, and people in the public eye in general, are expected to maintain a certain social grace, or at least a defined personality. We expect that these people, at the top of their highly-publicized fields, will have cultivated some amount of social comfort or developed a more extroverted personality during their time in the spotlight. The news-consuming, opinion-having public loves to analyze people’s traits in the context of their occupation, both for the purposes of the occupation itself — i.e., where Durant will sign in free-agency — and for the ability to relate to celebrities. It is fun, objectively, to picture ourselves in the position of a certain person doing a certain thing of interest. We then nourish our own likes and dislikes, a natural process which helps us evaluate our personalities and biases.

Perhaps it tells something of a person who takes a particular interest in Leonard, who can be awkward and restrained when plopped in a crowded room. The clip last September of Leonard laughing bizarrely and saying he’s “a fun guy” at his introductory Raptors press conference went viral,  has come to symbolize his general discomfort in the public situations his job entails.

One snarky internet commenter deadpanned that Kawhi “has the personality of a pebble.” Clips of his postgame press conferences and interviews consistently draw high YouTube viewership despite the lack of notable soundbites. Leonard’s natural personality stands out in an NBA defined by superstar melodrama.

His personal life is blurrier than those of his fellow NBA elites. We know that he has a girlfriend and a child, and is from southern California. His Uncle Dennis — known primarily from ESPN reports digging into Kawhi’s mysterious Spurs exit last year — seems to wield some level of influence over his nephew’s off-court decisions. New Balance makes his shoes.

Leonard appeared on teammate Serge Ibaka’s YouTube cooking show in April, a rare willing public foray. Ibaka, according to a feature story by Bleacher Report’s Howard Beck, is Leonard’s best friend on the Raptors. But at one point during the video, Ibaka did not know whether Leonard’s partner is his girlfriend or his wife. That simple personal detail seems like something a friend would know. Ibaka had to ask.

Part of the conversation on that YouTube show centered around Leonard’s impending free-agency, which hangs over this storybook Raptors playoff run. Recent reports have suggested a Kawhi return to Toronto is possible, even likely, though it might mean a short-term deal. Last season’s long-term injury and departure from San Antonio remains a riddle, as do his motivations in free agency this summer. The NBA’s landscape depends heavily on the unknown drives and feelings of a superstar.

It is not exactly uncharted territory for the NBA to hinge on the cryptic impulses of an enigmatic star. It is, however, unusual for a game-changing star to have as introverted a personality as Leonard. A superstar who takes on such vulnerable human qualities is relatable in ways other public-facing talents are not. Kawhi provides a hope that even the best of the best can, at their core, be normal people.