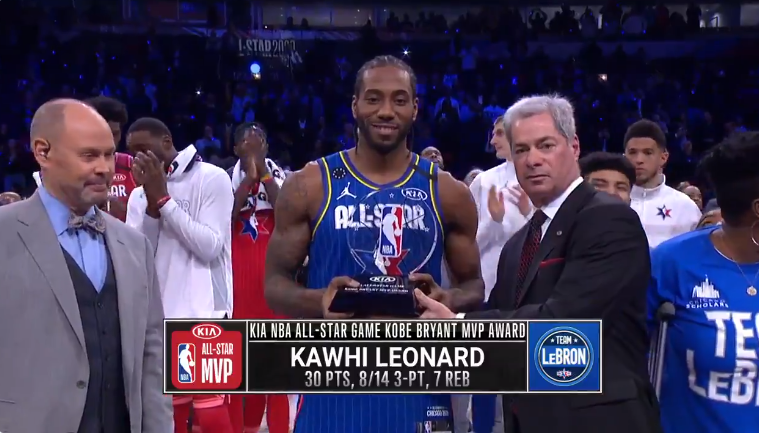 The 2020 NBA All-Star Game featured one of the most exciting fourth quarters in the history of the exhibition game, with Team LeBron ultimately coming out on top 157-155 over Team Giannis. Kawhi Leonard won the Kobe Bryant MVP Award after scoring 30 points — with 25 points in the first half —  and going 8-of-14 on three-pointers.

The new format definitely increased the intensity in the fourth quarter (and Leonard and other players admitted as much in the postgame). The game featured the “Elam Ending,” setting a target score of 157 points instead of having a traditional 12-minute fourth quarter.

How much did Elam Ending ramp up the defense?

That led to actual defense and physical basketball being played down the stretch, something that wasn’t the case in the first three quarters (and has rarely been seen in All-Star Games over the last 20 years).

Video evidence of actual defense being played in the NBA All-Star Game. pic.twitter.com/o5xZ4TwBEq

Did they get the call right? pic.twitter.com/wB5JBHuaMa

Now, the one clear drawback of the Elam Ending is being able to win on free throws, and that’s exactly what happened. Anthony Davis made this walk-off free throw (after missing his first try) to give Team LeBron the win.

Not the most exciting way to end an otherwise thrilling fourth quarter. pic.twitter.com/9F5ANQ5JsU

Still, the Elam Ending has to overall be viewed as a huge success for this game. And there was some added excitement and incentive for each quarter, due to the teams having charity money to play for. $100,000 was on the line for the first three quarters, and the winner of the game got $200,000. In the first half, each team won a quarter, followed by a tie in the third quarter that led to the money being rolled over to the fourth. In the end, Team LeBron earned $400,000 in charity money for Chicago Scholars, and Team Giannis earned $100,000 for After School Matters.

While the first three quarters didn’t feature nearly the same intensity as the fourth quarter, it was still very entertaining to watch the best basketball players in the world make ridiculous plays. Some examples:

Trae Young drills it from half-court at the halftime buzzer. pic.twitter.com/Jqu5Gaxx6T

hold on a damn second Kemba made that look way too easy pic.twitter.com/fbuPMVVAZ5

LeBron James seems to have this basketballing thing down pat. pic.twitter.com/41xN8fiGIP

The night also featured some fantastic tributes to Kobe Bryant.

Jennifer Hudson sang her heart out in a tribute to Kobe and Gigi 🙏 pic.twitter.com/XVATcBBkyI

.@common honors the city of Chicago and Kobe Bryant with his opening tribute at #NBAAllStar pic.twitter.com/NFBpKwicB3

Magic reflects on the losses of David Stern and Kobe Bryant before the NBA All-Star game. pic.twitter.com/r8fS0coGSL

It was a very emotional night, but ultimately a very successful one for the NBA.