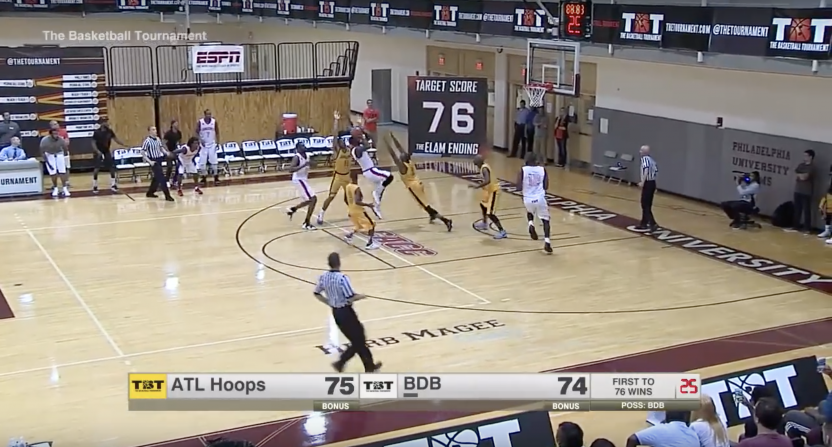 The Basketball Tournament, the winner-take-all $2 million dollar event, is continuing to grow in stature and interest since its founding in 2014. This year though, The Basketball Tournament is making headlines for an audacious rule change that is opening up new conversations about the way basketball is being played and could be played in the future.

After experimenting with the concept in 2017, this year every TBT game is using the Elam Ending to declare a winner. If you haven’t been watching TBT games or if you aren’t incredibly well-versed in advanced statistical theorizing, you probably have no idea what the Elam Ending is. The short attention span explanation goes like this – at the first under-four minute stoppage, the game clock is taken off the scoreboard. The first team to then reach the target score wins. How is the target score set? It is simply seven points tacked on to the score of the leading team at that point.

That’s it. It’s how you probably played on every playground growing up. First to ___ wins. Of course, with $2 million on the line, it’s a transformational change to the way top-level basketball has been played since its founding.

And it is amazing.

In fact, I would even go further than that. Yes, we live in an age of hyperbole and hot takes where everyone can get carried away with anything for good or for bad. But after watching TBT games this weekend with the Elam Ending in use, I was completely won over. The NBA and the NCAA should seriously think about instituting the Elam Ending tomorrow, because it exponentially improves the end of game experience for everyone involved.

The Elam Ending gets its name from Nick Elam, a regular guy from Dayton, Ohio, who like scores of basketball fans across the country, has grown sick and tired of the foul-a-thon that often takes place at the end of games in the NBA and NCAA. Elam’s goal was simple – to try to create an endgame sequence where basketball actually looks like basketball instead of watching one team walk up the floor to shoot free throws and another team race down the floor to jack up threes.

The Elam Ending accomplishes that mission because trailing teams who would dare to commit intentional fouls would be gifting their opponents an easy victory. Instead, they are required to play tight defense (as they would for the rest of the game) and try to get stops while scoring at the other end.

One of the best examples for the benefits of the Elam Ending came in the game between the Scarlet and Gray (Ohio State alumni) and the Matadores (Texas Tech). The Ohio State team held a 75-70 lead when the Elam Ending began. With a target score of 82, the Scarlet and Gray led 80-73. The game ended with an alley-oop dunk that brought the entire gym in Columbus to their feet.

Take a look back at this Money Moment from @ScarletGrayTBT that sent them to Super 16 in style! #TBT2018 pic.twitter.com/Aw7Qwie6Sq

Now here is the relevant question for sports fans – would you rather watch a game-winning, walk-off alley-oop… or would you rather watch the Matadores foul on four or five possessions in a nearly hopeless, time-consuming waste of everybody’s time? I would be willing to wager that at least 99% of fans would prefer the first scenario, unless there is someone out there who just really, really enjoys the art of the intentional foul.

Then there’s the ultimate ending – next bucket wins. With the score tied at 67-67, the Primetime Players beat Big X with this corner three. Can you imagine the tension that you would feel on offense and defense in that kind of situation?

It’s really difficult to see any negatives to the Elam Ending aside from the fact that it’s such a drastic, radical change and people are usually resistant to that kind of thing. But there’s no doubt that it creates better, more exciting basketball down the stretch. Here are just a few arguments in favor of the Elam Ending that go beyond the highlights…

– A team can keep their best players on the floor, even if one of their players isn’t a good free throw shooter. In the Elam Ending, someone like Dwight Howard or DeAndre Jordan doesn’t become unplayable in crunch time.

– Diversity of endgame strategy should actually increase. Instead of just one endgame method (foul… foul… foul) we could see trailing teams choose to either sit back and defend in the half court or try to press to decrease the margin quickly. If a team is three points away from victory, do they look for the game-winning shot or do they continue to run their normal offense? If a trailing team goes on a significant run that closes the gap during the Elam Ending, how would the winning team respond? There’s so many possibilities inside the Elam Ending that it’d be great fun to see how the different scenarios would play out instead of the same free throw parade we see all. the. dang. time.

– The Elam Ending is made for television. Are you kidding me? Instead of the endless parade of fouls and timeouts and stoppages, the Elam Ending creates a natural conclusion to every game that draws viewers and fans alike in. Amidst an endless array of stoppages in games now, it’s easy to change the channel or lose interest. If you do that during the Elam Ending at any moment, you risk missing the end of the game. Every broadcast partner of the NBA and college basketball should be calling the powers that be now and demanding its implementation.

Sure, the Elam Ending would never see a crazy shot like famous Derek Fisher’s game-winner against the Spurs or a half-court heave for the win. But I would trade 100 more entertaining, more watchable Elam Endings while sacrificing a buzzer beater or two than have to sit through another game where a team is still fouling down 9 points with 40 seconds on the clock.

The Elam Ending isn’t perfect and it could use a couple tweaks. After the four minute stoppage, there should probably be a jump ball so a team leading with possession doesn’t just run down the clock and call timeout at the 3:59 mark to get the ball first. And I wonder if there’s a fix for the scenario we saw in the first round game between The Trenches and Big X. Leading 79-77 with a target score of 80, The Trenches intentionally fouled Big X to prevent a potential winning three. However, they missed at the other end with the score tied 79-79 and Big X was victorious. Maybe “next bucket wins” is worth the trade-off in that case. Since the Elam Ending is so new to nationally televised basketball there probably are more quirks and kinks that we haven’t even discovered yet.

Realistically, we may never see the Elam Ending go beyond The Basketball Tournament. If we did, it may be a generation or two before it gets tested and re-tested to a point where the sport at the highest levels can actually talk themselves into thinking about possibly, potentially instituting such a gamechanger.

But if the NBA or NCAA were bold enough and creative enough to just give it a chance, it could fundamentally change the game of basketball for the better.