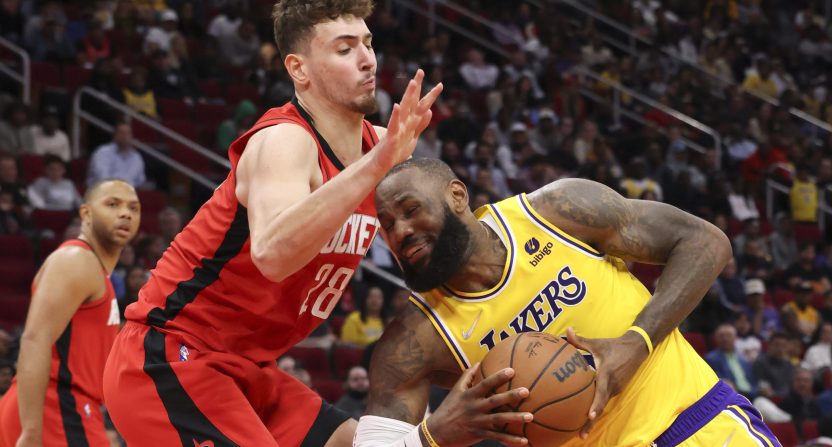 Having lost eight of 10 games, the Los Angeles Lakers entered Wednesday’s game in a cold stretch. But going against the Houston Rockets — who have the NBA’s worst record — Wednesday night seemed like a golden opportunity for the Lakers to right the ship. It didn’t work out that way.

The Lakers had a chance to win in the final seconds of regulation, but Carmelo Anthony missed a buzzer-beater attempt, sending the game into overtime. There, the Rockets put the Lakers away, outscoring them 19-10 to win the game 139-130.

If you’re a Rockets fan, it was a great night. Not only did you see your team defeat the Lakers but you saw two rookies — Jalen Green and Alperen Şengün — have the best games of their young careers.

For the Lakers, it was another rough night. NBA fans showed how unimpressed they were by the Los Angeles effort during and after the game.

Rockets-Lakers has a grim “Celebrity Boxing” oddity energy to it.

Lakers giving up 68 PTS in the 1st half to the rebuilding Rockets like pic.twitter.com/qcsub7ZW01

Every Lakers game is either a blowout or just completely stupid

Lakers can't get eliminated in the first round if they don't make the playoffs: https://t.co/XsJkI7LvZg pic.twitter.com/AaKWqr8mW6

I’m not going to call names but wow do the Lakers suck.

Add “Getting Blown Out in Overtime by the Rockets” to your Horrendous Lakers Losses Bingo Card.

What a total debacle.

The Lakers just lost to the Rockets.

The Rockets were missing 2 starters and were 2-17 in their last 19 games.

It was also a mixed game LeBron James. LeBron did have 23 points, 14 rebounds, and 12 assists. His 16 triple-doubles since turning 35 are now twice as many as any player in NBA history.

Most triple-doubles by a player after turning 35:

That’s the good news. The bad news for LeBron is that he wasn’t efficient. He shot 9-for-26 from the field and 1-for-9 on threes. Even the one made three-pointer didn’t amount to much more than a garbage-time shot, as it came late in overtime and cut the Lakers deficit from 11 to eight.

He also passed on a potential game-winner at the end of regulation, opting to kick the ball out to Anthony.

He also had some rough moments on defense.

This pass fake by Eric Gordon is TOUGH

19-year old Sengun bullies LeBron for a bucket inside and then blocks him at the other end pic.twitter.com/OhuFDZFv05

Much like his team’s, LeBron’s performance came under heavy fire.

LeBron with a chance to win the Game tonight pic.twitter.com/BqmL7NUdiH

LeBron at the huddle explaining why he passed on a reverse layup pic.twitter.com/acu21P5P06

I haven’t seen Lebron play this bad since 2011 and we don’t speak on that with all due respect pic.twitter.com/wUMf86dfWS

So y’all ready to admit they should shut LeBron down for the season? It’s over.

The Lakers are still in position to make a play-in game. But if they want to maintain that position and go on any sort of run if they do make it, things are going to need to get a lot better and fast.