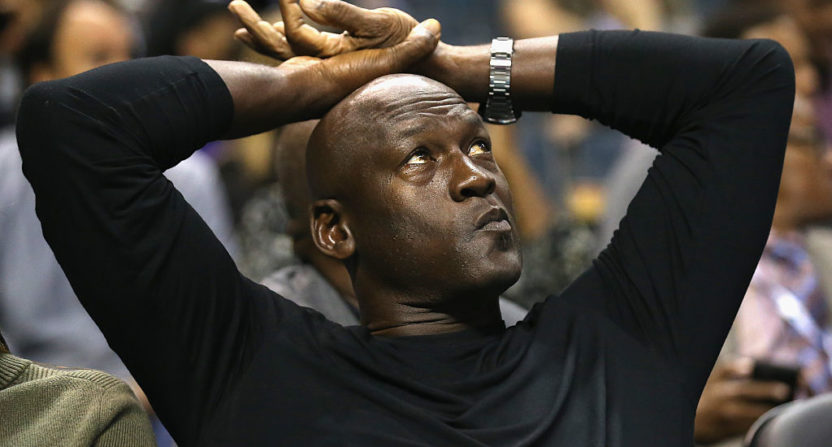 Michael Jordan isn’t so thrilled with the superteam era. In an interview with Cigar Aficionado — apparently the GOAT smokes six cigars a day — Jordan said he thinks concentrating the league’s talent on a couple of teams has hurt the NBA from a competitive standpoint.

Michael Jordan expresses major concerns over NBA's Superteam era in a Cigar Aficionado cover story: "28 teams that are going to be garbage" pic.twitter.com/zf68TWCUxW

That sounds about right coming from the owner of the small-market Charlotte Hornets. But this is Jordan, and everything the legend says carries a little more clout. We’ve seen the Warriors and the Cavs face off in three straight NBA Finals, and before that LeBron James’ Big Three in Miami reached the league’s biggest stage four straight times. Ever since, it’s been a hot topic around the league. Commissioner Adam Silver has gone back and forth on how he thinks the superteam era has affected the NBA.

Of course, Jordan was on one of the original superteams when the Bulls added Dennis Rodman, a seven-time All-Defensive selection and four-time rebounding champion, during the 1995 offseason to a roster that already featured Jordan and Scottie Pippen. Jordan had no problems with stacking the odds in his favor then, and his team went on to win 72 games, a record that stood until the 2015-16 Warriors won 73.

We’ll see how Jordan’s prediction pans out. The East will pretty much be garbage aside from the Cavs and the Celtics. But several teams in the West made major moves this offseason to keep up with the Warriors, and that should make for an entertaining season. The Rockets added Chris Paul to a backcourt already led by two-time MVP runner-up James Harden. The Thunder traded for Paul George and Carmelo Anthony to create a transition lineup as imposing as Golden State’s. The Nuggets signed four-time All-Star Paul Millsap. And the Timberwolves acquired for Jimmy Butler while making a long-term commitment to Andrew Wiggins.

Can any of those teams touch the Warriors? Probably not. Golden State is still the odds-on favorite to win the title. But none of those teams will be proverbial garbage.