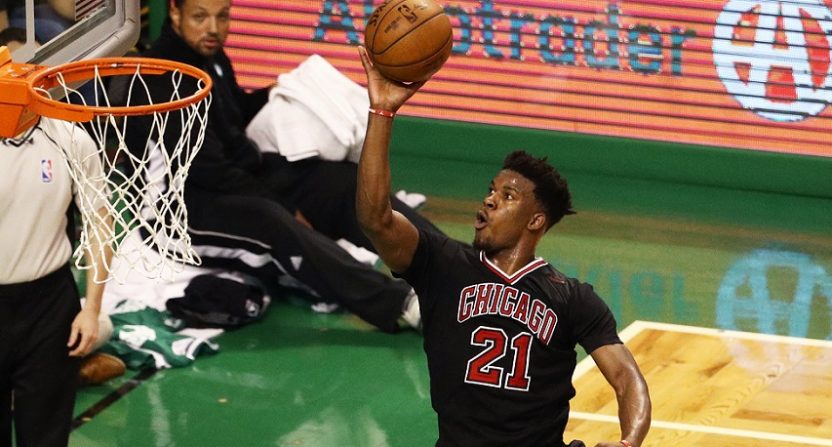 Unless you’re into suffering, rooting for the opposition doesn’t seem ideal. Unless you’re fans of the Chicago Bulls, the eighth seed in this season’s NBA Eastern Conference playoffs.

For Bulls fans, the last nine months have been filled with numerous, head-scratching moments. After tipping off the free agency period by signing a playmaker in Rajon Rondo, the Bulls’ front office felt the need to sign another one in Dwayne Wade, whose long-range jumper reeks of inconsistency.

While they’d be paired with bona fide superstar Jimmy Butler, weaving together a lineup of poor shooters under coach Fred Hoiberg’s polar opposite approach was bound to fail. Once Wade spurted an organizational tirade midseason, a collapse appeared evident.

Nearly one month later, general manager Gar Forman and vice president of basketball operations John Paxson — known to many Chicagoans as “GarPax” — continued to exhibit utter dysfunction, trading Taj Gibson, Doug McDermott and a 2018 second-round pick for Cameron Payne, Joffrey Lauvergne and Anthony Morrow. Although Gibson’s contract was up following this season, while McDermott showcased a sketchy jumper, the players which the Bulls received in return barely cracked into the rotation.

The only trend the “younger and more athletic” Bulls established was notching the third-fewest three-pointers made in the league. Yet the organization escaped a dreadful campaign with an appearance in the playoffs. After a 106-102 win in Game 1 of its first-round series against the Boston Celtics, Hoiberg’s bunch clearly possesses a legitimate shot at knocking off the No. 1 seed in the Eastern Conference.

Let’s not deviate from the obvious, though. Because of Chicago’s inability to move past the LeBron James-led Miami Heat and Cleveland Cavaliers in past playoff series, the franchise is pinned upon a billboard of mediocrity. With additional wins versus the Celtics and possibly beyond, the likelihood of the team dislodging itself in exchange for a total rebuild becomes even slimmer.

Unfortunately, Butler’s rise to greatness sits at the forefront of the team’s mess. In the regular season, he averaged a career-high 23.9 points per game, entrenching himself as a go-to shot creator. On top of that, the fifth-year forward also collected a 24.8 assist percentage, which assesses the percent of his teammates’ field goals he contributed towards while on the court. That number even rose to 33.3 percent when Wade sat out with a fractured elbow.

In Sunday’s Game 1 victory, the 6-foot-7, 231-pound Marquette product went on to amass 23 of his team-high 30 points in the second half, including a pivotal jumper (1:02) midway through the fourth quarter to shred Boston’s final lead of the evening. As stellar as Butler was, what’s scarier is the notion that a dominant, 48-minute performance is still on its way.

“We haven’t done that (execute) all season, but this is the right time to do it,” Butler said postgame.

But the more victories Butler helps accumulate, the easier it’ll be for the front office to use postseason success as an excuse for retaining him. Considering the Bulls rank fourth among Forbes’ most valuable NBA franchises, worth an estimated $2.5 billion, the organization isn’t losing sleep over its lack of postseason success of late. However, if a deal was swung for Butler, its revenue would take a major hit. Moreover, Wade owns a player option in his contract for next season, so Butler’s potential departure would likely mean an exit for Wade as well.

Jimmy Butler has the 8th best-selling jersey in the NBA. Derrick Rose is 12th. Bulls are third in the league in merch sales. pic.twitter.com/iSTPJ2e4m6

Oddly enough, the Celtics were rumored to be interested in Butler at the deadline, but they reportedly wouldn’t pony up the No. 1 pick in the 2017 NBA Draft, which was acquired from the Brooklyn Nets. Given his absurd production, though, Boston, along with a handful of other teams intrigued by the 27-year-old star, would be willing to ship over a hefty amount in return come June.

No rebuild is guaranteed to succeed. Just look at the Philadelphia 76ers, who are still attempting to assemble a viable playoff roster after beginning their overhaul by trading Jrue Holiday for Nerlens Noel and a first-round pick in June 2013. But on the flip side, Boston has produced a contender following a 23-win campaign just three seasons ago.

Trusting Chicago’s inexcusably safe front office to make the correct decisions post-Butler would be a risky proposition too, but they could also dig a deeper hole for the franchise with another stab at free agency. If the Bulls fail to capitalize on a jam-packed market, Butler will continue to hold the organization’s head above water for the remainder of his five-year, $92 million contract. Go Celtics.