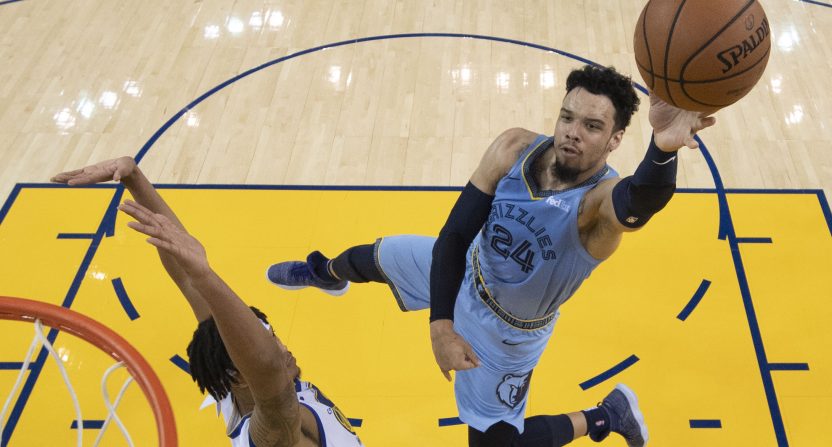 If you’re going to make a three-team trade happen, it would seem wise to have all three teams communicate with each other on the deal.

That didn’t happen in three-team trade conversations in the NBA on Friday night, and the deal fell apart as a result.

First, ESPN’s Adrian Wojnarowski reported that the Washington Wizards were “in advanced talks” to acquire veteran forward Trevor Ariza from the Phoenix Suns.

Wojnarowski followed up with tweets that the Memphis Grizzlies joined the trade, with second-year Memphis guard Dillon Brooks part of the package going to the Suns.

Washington, Phoenix and Memphis have agreed in principle on deal that will also include Wayne Selden and Dillon Brooks headed to Suns, and a 2020 Grizzlies second-round pick and a conditional 2019 second-rounder to Washington, league sources tell ESPN.

Sources with @ZachLowe_NBA: Deal in jeopardy over which Brooks — MarShon or Dillon — the Suns believed it was getting in the trade. Memphis will not put Dillon Brooks in the trade, sources said.

The confusion reportedly happened because “Memphis and Phoenix didn’t communicate directly on the trade” and “used Washington as a conduit” to get the deal done.

Deal's suddenly in peril. Memphis and Phoenix didn't communicate directly on trade, using Washington as a conduit in coordinating the 3-team deal, sources tell @ZachLowe_NBA and me. Grizzlies believe they were trading MarShon, but somehow Suns believed it was Dillon.

And, now, as others are reporting: hearing the deal is in major trouble because of the Brooks confusion.
Y’all…

Per source, a trade call was requested w/the league Friday. It is pro forma for the league to double-check with all teams involved to make sure everyone agrees. It was then—before a trade call was officially set up—that the Suns said Dillion, and the Grizzlies said MarShon.

And that confusion killed the deal.

Memphis wouldn’t put Dillon Brooks in the deal and “insist” they said MarShon Brooks all along, even though Washington claims they heard otherwise in the discussions.

Washington believes it was told Dillon Brooks in conversations with Memphis. The Grizzlies insist they told Washington it was MarShon. One rival GM texted me and said: "Maybe Washington can put Scott Brooks in if there has to be a Brooks in the deal." Welcome to NBA Trade Season.

Last last thing: Grizzlies vociferously deny they ever mentioned Dillon Brooks, to anyone. They insist that Pera never talked with Sarver. Grizzlies GM Chris Wallace: "Robert Pera did not have a conversation with Robert Sarver about this proposed trade."

Incredible. Now, there would seem to be a decent chance that the Suns and Wizards still work out a deal involving Ariza… but will probably have to work with a different team than the Grizzlies if it’s a three-team deal.

Dillon Brooks was at least able to get a laugh out of the mess.