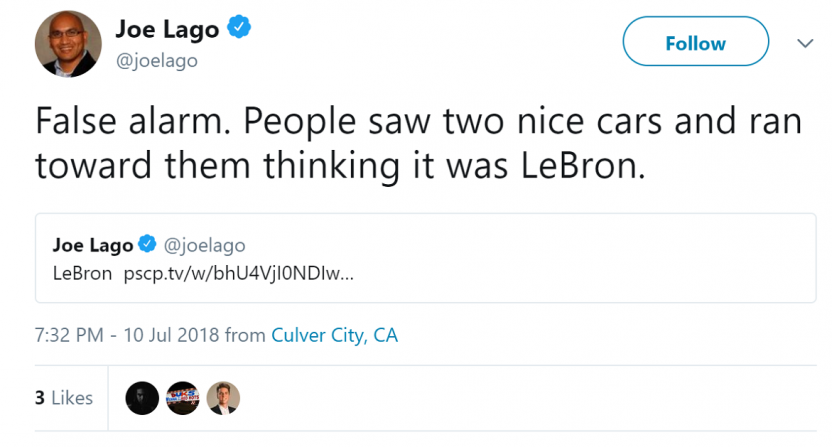 Blaze Pizza is a made-to-order pizza chain that’s not bad. LeBron James was an early investor in the company, which opened its first location in Irvine, California, in 2012. It’s now nation-wide, but today, the SoCal locations offered what they termed a pizza party to celebrate LeBron’s arrival in Los Angeles.

Los Angeles—are you ready for the King of all pizza parties?! We're celebrating @KingJames arrival in LA with free pizzas on 7/10! Stop by any of our LA locations between 2-5pm for your free pie!

Let's welcome #LAbron to LA the only way we know how! https://t.co/DPcb0rBvQH pic.twitter.com/Lu3p1V5L00

There’s nothing people like more than free food, chain or not, so the crowds were always going to be pretty big this afternoon. But last night LeBron tweeted that he might be making an appearance:

Haven’t been to a pizza party in a minute 🤔 Culver City? 👀🍕 https://t.co/1QxgALyekK

You’ll note that LeBron didn’t say he was definitely coming, but some people weren’t taking the chance on missing out.

How many people are standing in line to see if LeBron James shows up at a Blaze Pizza in Culver City? pic.twitter.com/5MxwtdILla

The view of LeBron Watch at Blaze Pizza from the 405. pic.twitter.com/zpRIkOOhCm

It wasn’t just fans, either, as The Athletic LA editor Joe Lago pointed out:

Elise and Rick Wetzel, founders of @BlazePizza, are ready to welcome LeBron to L.A. pic.twitter.com/nE1eTEJPe5

Joe’s feed really conveyed the ups and (most of all) downs of the wait:

The boredom of waiting in the summer heat for LeBron is taking its toll on Laker fans. pic.twitter.com/HKAVLZo2Ys

Doubt is growing over whether LeBron will show up. Said one Laker fan losing his patience: “Kobe would show. He wouldn’t get out of his car, but he’d show up.”

Then, a light in the darkness:

But this world is a cruel one:

False alarm. People saw two nice cars and ran toward them thinking it was LeBron. https://t.co/LowZFeusRm

And then, presumably after someone told LeBron what was happening and he or someone who works for him informed the store, the final announcement:

LeBron will not be showing up for the Blaze Pizza party here, an employee just announced.

At least one person should be happy, because he’ll get to criticize the promotion and the no-show:

Dear LeBron: You can't buy the love of true longtime Laker fans by giving away pizza from the chain in which you own a reported $40 mil stake. You have to earn their love on the court. No meltdowns. No "cramping."

(Obligatory: what a tool.)

The tone of coverage did change quickly:

Yes, forced indeed, truly some people have had a terrible day…eating free pizza? Obviously it would have made for a cool moment if LeBron had showed up, but the much more likely thing that happened is he tweeted the Culver City thing as a way to promote the giveaway, thought about going for a few seconds, decided not to, and completely forgot about it until it was too late to swoop down near rush hour in Los Angeles.

It is, however, a nice example of the kinds of storylines we’re in for as long as LeBron is in Los Angeles. So, look forward to that, everyone!