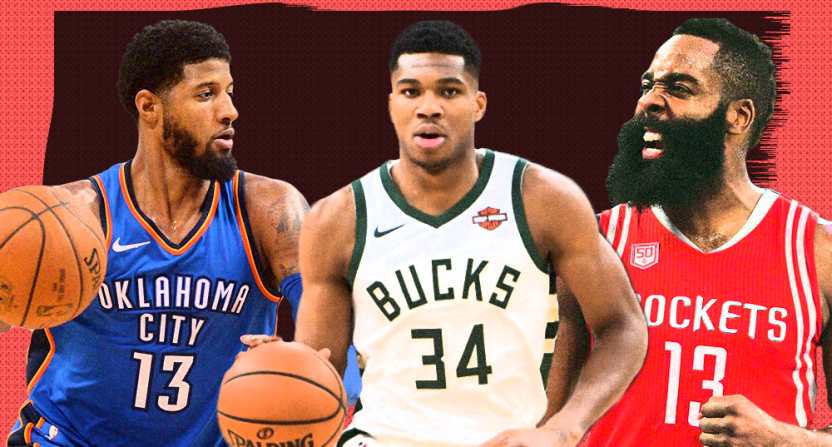 In 2017-18, there wasn’t much debate for NBA Most Valuable Player. Houston Rockets guard James Harden took home his first trophy after receiving 86 first-place place votes after an exceptional season where he led the NBA in scoring. In 2018-19, the race is a bit more open as numerous candidates (including some surprises) are challenging for MVP. Here are the top ten MVP candidates this seson.

It’s been a bizarre season for Davis, whose off-court trade demands have overshadowed his stellar play on the court.

Just 25 years-old, ‘The Brow’ is once again putting up eye-popping numbers despite the Pelicans being a complete mess. Davis is averaging 27.3 points, 12.4 rebounds and 2.5 blocks per game, along with an NBA-best 35.0 Player Efficiency Rating (PER). David falls to 10th place since he’s only played 49 games thanks to how New Orleans scrambled trying to handle his trade request. His usage bizarrely dropped dramatically post-trade deadline.

In any other season, Davis would be a top-three MVP candidate with those kinds of numbers. However, the Pelicans’ drama has hurt his chances of bringing home the trophy.

In his seventh season with the Trail Blazers, Lillard’s clutch play has propelled Portland to one of the best teams in the entire NBA.

In 62 games, Lillard, a 2019 NBA All-Star, is averaging 25.9 points, 6.3 assists, and 4.6 rebounds. The 28-year-old is shooting a career-best 44 percent from the field as the Blazers’ number one scoring option, and he’s hitting just under 37 percent of his three-point shots. Lillard’s played exceptional basketball all season. Paired with shooting guard C.J. McCollum and center Jursuf Nurkic, Portland is a sneaky good team in the West with a 39-24 record—five games back of the first place Golden State Warriors. For a Trail Blazers team swept in consecutive first-round playoff series, this team feels different. Lillard’s stellar play is a big reason why.

It’s been another fine season for the back-to-back NBA Finals MVP. In his third year in Golden State, Durant’s averaging 27.6 points, 6.4 rebounds, and 5.8 assists, while shooting 36 percent from three and 51 percent from the field. In the Warriors’ offense, Durant continues to play like a cheat code, as his combined 6’10” height and 7’4″ wingspan plus his shot-making ability makes him a nightmare to match up against. Defensively, he can switch onto multiple positions and use that length to cause problems.

In order to rank higher, Durant would need to match career-high scoring numbers across the board. He hasn’t done that, but he’s still having an MVP-calibre season.

The 30-year-old remains a cold-blooded scorer, capable of pulling up and knocking down a shot from anywhere on the floor. Once a defender sags off Curry even for a second, the 2009 Davidson-alumn will make them pay. In the Warriors offense, Curry’s runs the show. He’s smart, doesn’t turn the ball over too much, and is the rare star not afraid to give players around him more of a chance to shine at the sacrifice of his own numbers. But, he also doesn’t mind taking big shots.

Curry ranks one spot ahead of Durant because he’s stayed mostly healthy, averages more points (28.4), shoots much better from long-range (43 percent) on way more attempts (5.3 vs 11.9) and is ultimately more important to Golden State’s future success. If the 6’3″ point guard can stay healthy entering the playoffs, opposing teams will have little chance to stop the Warriors from repeating as NBA Champs.

Leonard sat out nearly the entire 2017-18 season with the San Antonio Spurs with a mysterious quad injury, so what the Toronto Raptors would ultimately get from the 2014 NBA Finals MVP—who they traded their franchise player for—was unknown. Thankfully for them, Leonard’s play has eased all doubts about his place as a top-five player in the league.

In 46 games with Toronto, Leonard’s put up career-best numbers thanks to an increased role in coach Nick Nurse’s offense. The 28-year-old is averaging 27.0 points, 7.5. rebounds and 3.3 assists per game. On top of that, Leonard’s defense—like past seasons—has been outstanding. Despite the initial concern, he’s fit in nicely with the Raptors and become the MVP candidate they’ve lacked in recent years.

Leonard would be a top-three candidate on this list if precaution didn’t keep him out of nearly 20 games. He regularly has rested thanks to “load management” in preparation for the playoffs.

Jokic is a special player with a unique skillset among NBA centers. Despite checking in at 7’0″ and still having some baby fat on his body, the 24-year-old is a gifted passer with the court vision of an elite point guard. He makes everyone on the court around him better and can find open players with the best of them.

Jokic isn’t just a great passer, but he’s a plus scorer and an above average rebounder, scoring 20.6 points and 10.7 rebounds per game. He’s already nabbed 12 triple-doubles already, an NBA record for a center, and sits second place all-time among centers behind Wilt Chamberlain. That’s pretty damn impressive company. Barring an epic collapse, he’ll lead the Nuggets to the playoffs for the first time since 2012-13 and rightfully earn a few MVP votes.

The Lakers have played subpar basketball for most of the season and probably will miss the playoffs. But, that’s not because LeBron isn’t playing at an MVP-level – he totally is.

In 45 games, the 34-year-old hasn’t lost a step averaging 27.0 points. 8.7 rebounds, 8.1 assists while posting healthy shooting numbers with a cavalcade of young and odd fits as teammates and a generally mediocre roster. As much as team president Magic Johnson wants to believe, the Lakers weren’t built to win this year. Without James, Los Angeles has won just seven of 19 games. Yes, he hasn’t helped himself with some questionable on-court blunders, but LeBron is still the GOAT and the Lakers would be complete trash without him.

George has supplanted Russell Westbrook as the most valuable player on OKC and for the first time in his career is a serious MVP-candidate.

The 28-year-old is having his best career-season in nearly every measurable stat. George’s 28.6 points, 8.1 rebounds, and 4.3 assists per game would all be career-highs if the season ended today. He’s also shooting nearly 40 percent from three and 45 percent from the field while playing 1st defensive team quality defense. He leads the NBA with an 8.07 real plus-minus.

Everything has clicked for George. He’s become the go-to scorer with the Thunder and hit some big shots for the team.

For the first time since Kevin Durant left, the Thunder can make some noise in the playoffs. George has been every bit as good as KD – if not better.

Harden’s singlehandedly kept Houston competitive with offensive production. He leads the league in scoring, averaging an insane 36.7 points, on top of 7.6 assists, 6.6 rebounds and a 30.49 PER. “The Beard” has done nothing but fill up the bucket all season. Harden’s having one of the best individual scoring seasons ever and has a great case for his second consecutive MVP trophy.

Harden’s been great, but for a player with a history of tiring by the time the playoff comes, it’s not unfair to wonder if he’s getting overused. That doesn’t mean he hasn’t been dynamic all season, however. If he was a plus-defender, he’d be number one on this list.

Still just 24, Antetokounmpo’s taken another step in his evolution to becoming the league’s best player. He’s a monster on the court whose ridiculous height, length, and mobility make him nearly impossible to guard. In his sixth season, Antetokounmpo is averaging 27.1 points, 12.6 rebounds, 6.0. assists and 1.5 blocks per game, while shooting 57 percent from the field. In new coach Mike Budenholzer’s offense, he’s been much more efficient, using his length to throw down on basically any defender. Seriously, good luck stopping him.

It’s sort of scary to think Giannis hasn’t reached his peak considering he’s already this good. He’s got the stats, the highlights, and the wins – leading the Bucks to 1st place in the East. That should help him cement his first of many MVP trophies.