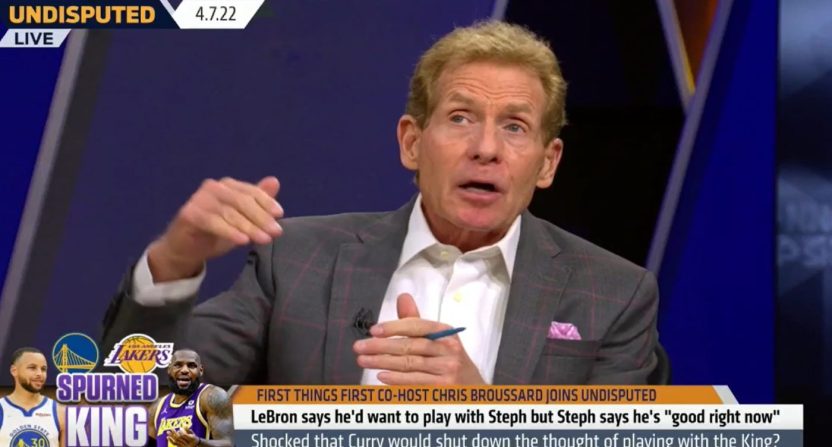 A “brilliant, master media manipulator” and a “pure public relations genius.” Skip Bayless has showered LeBron James with so much recent praise that it almost makes you forget his decades of LeBron slander and hate.

On the latest episode of his YouTube show The Shop, James was asked to list the basketball players he’d like to have as teammates. After first mentioning his high school son, Bronny James, LeBron moved on to his former NBA Finals rival Steph Curry. According to Bayless, the surprising selection of Curry was just another great media ploy by James.

“LeBron James and Maverick Carter strike again,” Bayless declared Thursday morning on Undisputed. “This was pure PR genius. This was, as I always call LeBron, master media manipulation. This was not coincidence that they drop this clip, one day after THAT happened. Yet another epic fail in the career of one LeBron James.”

It’s the second time in a two-week span that Bayless praised James as a “master media manipulator.” And considering his seemingly constant desperate search for reasons to criticize James, it’s always surprising to hear Bayless praise the NBA superstar, even if it’s fit with a sort of backhanded compliment.

The clip of James stating he wanted to team up with Curry was dropped hours after his Los Angeles Lakers were officially eliminated from playoff contention. And Bayless believes the timing was by design, to move the narrative surrounding James away from the Lakers’ disastrous season.

“They couldn’t even gain the 10th seed, it was disgraceful and LeBron knows it,” Bayless said of the Lakers. “All of a sudden they say, ‘well we got this clip, let’s drop it tomorrow,’ because they know the billions of blind witnesses out there will leap to the conclusion, ‘wait a second is LeBron suggesting he wants to leave?’”

LeBron James and Maverick Carter may be geniuses at playing the fans and most media members, but they can’t pull a fast one over Skip.

“They are master manipulators at changing the narrative,” Bayless continued. “The day after narrative needs to switch on the fly, it needs to create a whole new buzz about [LeBron].”