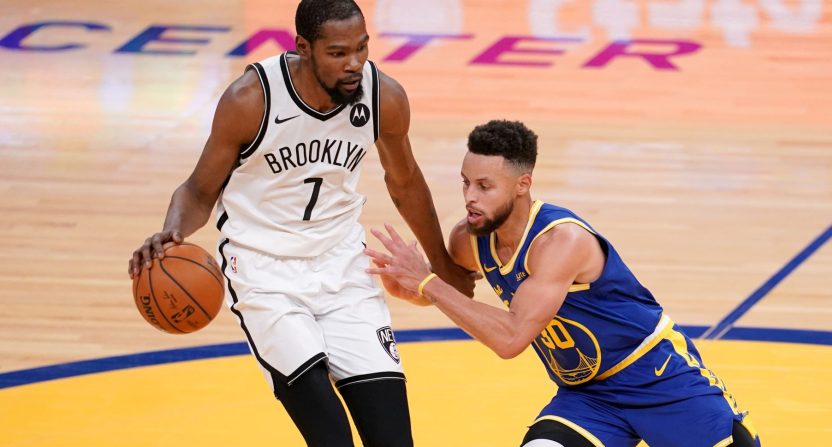 NBA superstar Kevin Durant chose not to re-sign with the Golden State Warriors following the 2019 NBA Finals loss to the Toronto Raptors, signing with the Brooklyn Nets instead. But despite his decision, it sure sounds like Steph Curry and the Warriors would have welcomed him back with open arms if a trade made sense.

In an interview with Rolling Stone, Curry revealed that the Warriors considered blowing up their championship roster to try to sign Durant and that he would have been open to the idea of Durant returning.

“There was a conversation internally amongst us about ‘If he was available, would you?’ Every team has those conversations, and obviously in our situation, they’re gonna call me and ask me, ‘How do you feel about it?’” Curry told Rolling Stone. “I was never hesitant. The idea of playing with KD and knowing who he is as a person, from our history in those three years, I think KD’s a really good dude. I think he is misunderstood. I think he has had certain things happen in his life that hurt his ability to trust people around him, in a sense of making him feel safe at all times. So all of those things, I understand, having played with him and gotten to know him. I love that dude.”

Though he would have welcomed the trade, Curry also acknowledges that he’s happy with the team’s current roster and that the team has to make the best decisions for longterm success.

“And if you said, ‘Oh, KD’s coming back, and we’re gonna play with him,’ I had so much fun playing with him those three years, I’d be like, ‘Hell, yeah!’” Curry said. “Then you have to think: What does that actually mean? What does it look like? You tell me I’m playing with [current Warriors teammates Andrew Wiggins, Jordan Poole, and Draymond Green], I’m like, ‘Hell, yeah!’ There’s all types of emotion and things that happen to the league. And if anybody’s saying that you wouldn’t entertain that conversation — no disrespect to anybody on our team — but you don’t know how things work. But you also understand, like, if we run this thing back, I’ve got complete confidence in my team that we can win it again, as constructed.”

Ultimately, Durant and the Nets mended their relationship and the star will be staying in Brooklyn, after all. But it’s certainly interesting to hear that Curry and the Warriors were interested in a reunion.