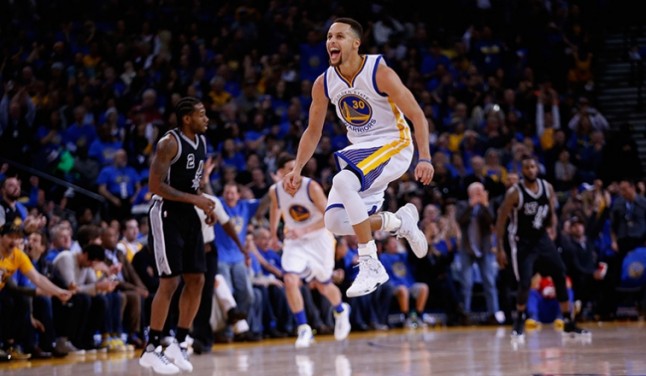 When the Warriors and Spurs got together a month or so ago in San Antonio, I wrote that both teams got what they needed, although neither got what they wanted.

The gist was this: The Spurs got the win that night, which they needed to stay alive in the race for the best record in the Western Conference. However, they didn’t get what they wanted, which was to produce a dominant performance despite numerous elements working in their favor (Warrior injuries; GSW being on a back-to-back; the Spurs being at home).

The Warriors, on the other hand, didn’t need to win, but they really wanted to in order to put the No. 1 seed question to bed. What they needed to do on March 19 was to compete, despite being without three key players, being worn down by the final long stretch of road games before their home-heavy finishing stretch, and playing in a city which has long been their house of horrors. The Warriors’ last regular season victory in San Antonio came in a year that started with “19.” Taking that game late into the fourth quarter allowed them to check that box.

With tonight's win, the #Warriors clinch the best record in the #NBA for the second straight season.https://t.co/Kemuk38ENj

That CliffsNotes summary of the recent past brings us to Thursday night in Oracle Arena. A month ago, we could have supposed this game would be very important, but it would have been very difficult to foresee why. The notion that the Warriors would lose two of three games at home leading into their date with the Spurs was preposterous.

Let’s start by updating the “Needs and Wants” checklist, shall we? It tilts much more in the Warriors’ favor this time, for reasons obvious and not-so-obvious.

Golden State needed the win to clinch home court throughout the playoffs, and the Dubs got it. They wanted the win to keep alive their hopes of surpassing the Bulls’ single-season record, and also to become only the second team in NBA history to win 70 games.  “Check” and “Check.”

I don’t think the Spurs really needed anything out of this game, which may explain why they seemed a step behind almost from the beginning. They wanted to win, of course, as they still had a mathematical shot at the best record, but they would have needed the Warriors to lose the rest of their games, which — even throwing the ball around the gym as they’ve been doing lately — was an unlikely prospect. 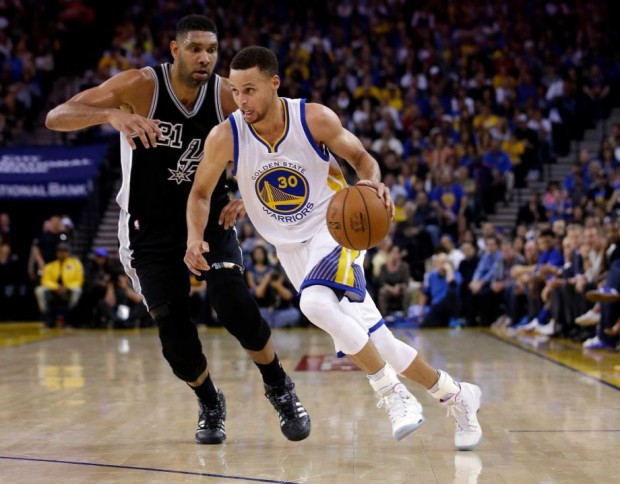 Stephen Curry’s fundamental third-quarter adjustment — driving to the basket when the Spurs extended their defense to take away the 3-point shot — gives San Antonio a lot to think (and worry) about heading into Sunday’s reunion in Texas.

I’m sure they also wanted to learn a little more about what the Warriors’ offense is all about and how they match up, and I think they did that. Their defense against Steph Curry and Klay Thompson at the 3-point line was very good, as it was on March 19, but they will have to figure out how to stop Curry from getting layup after layup when he adjusts as he did in the third quarter.

I expect that Spurs coach Gregg Popovich and his staff will focus on that third quarter.

The Warriors shot 16-for-20 from the field, including 15-of-17 on 2-pointers. Six of those were beautiful drives to the hoop from Curry, and he assisted on four more when the Spurs started to come from everywhere to try to stop him. It was an artful response to the Spurs pressuring him at the 3-point line, and it has to worry the Spurs that he made it look so easy.

That said, the Warriors didn’t get to check all their boxes, only most of them.

They spent two days last week explaining that they learned from their loss against Boston. They knew they couldn’t commit 22 turnovers and beat good teams, even at home. After proving that against Portland, the Warriors then committed 23 turnovers in a home loss to Minnesota.

What followed was two MORE days of explaining that they had learned, really learned, that they couldn’t turn the ball over and beat even bad teams, if the bad teams had a few really good players.

Steve Kerr has HAD IT with these crummy magic markers. pic.twitter.com/iJZAfDClb3

So, you can imagine how head coach Steve Kerr felt on Thursday night when Andrew Bogut pulled down a rebound 12 seconds into the game, tossed it to Draymond Green, and then saw Green throw the ball right to Danny Green. 2-0, Spurs. The Warriors had the ball for exactly four seconds and they had committed not only a turnover, but the worst kind: a live-ball interception in the open floor that led directly to a basket.

Those of you who are parents can imagine how Kerr felt.

While the Warriors’ turnover total wasn’t terrible (15), most of them were of the live-ball variety, and the Spurs turned those mistakes into 26 points, a quarter of their total for the game. The challenge for the Warriors is to push tempo and have fun without throwing the ball away. They’re never going to be a single-digit turnover team, but they have to be closer to that, in the 10 to 12 range, and limit the live-ball mistakes that lead to dunks and open transition 3-pointers.

So where do the Warriors go from here?

First of all, it sounds like they’re still all-in on the chase for 73 wins. Draymond Green spoke pretty eloquently on the subject after the game, when he said, “You don’t know what’s coming down the road. You’ve got to live each day like it’s your last. We’ll probably never have a chance like this again.”

Kerr, meanwhile, admitted to some “uneasiness” regarding the record, but he’s sticking to his end of the bargain he made with the players a few weeks ago. They will tell him if they need rest; otherwise, they’re in the lineup.

There is one game left on the schedule that I believe is important to all of the Warriors, record or no record, and that’s Sunday’s tilt in San Antonio. A win there accomplishes a multitude of wants, not the least of which is ruining the Spurs’ perfect home record and ending their streak of 48 straight home wins before it gets any closer to the 54-game streak the Warriors had snapped last Friday night. The fact that it would be their first regular-season win in San Antonio since Bill Clinton was President wouldn’t be bad, either.

The Warriors take on the Grizzlies in Memphis Saturday night, and it will be very interesting to see who’s sporting the blue-and-gold when the ball goes up… and in the subsequent 48 minutes. The Warriors must win both ends of a road back-to-back if they want 73 wins. Given the depleted nature of Memphis’s roster, if the Warriors are realistic about the push for 73, they need to steal lots of minutes against Memphis so that there’s enough in the tank for San Antonio.

It’s one of the most fascinating aspects of the Warriors’ season, and of this NBA campaign as a whole: Not only did a 70-9 team not clinch home court until Game 79, but that same team faces an uncertain and stressful ride in Games 80 and 81.

The Golden State Warriors are learning how to carry pressure at a great height. We’re all waiting to see if they can hit 73. If they don’t, how are they going to respond in the playoffs?

The San Antonio Spurs will likely shape the 73-or-not-73 answer. They’ll hope the Warriors will be more scarred than they’re privately willing to admit as a result of falling short…

… but don’t bet on that being the case.

The Warriors showed Thursday night that their house stands on a firm foundation, and that when the bright lights are on against a team that might finish with a 68-14 record, they know what to do.

All that’s left is to beat a junior-varsity Memphis squad twice… and then conquer their demons in the Alamo City.

That last part will be the hardest, but if any team can chase away ghosts, this one can.