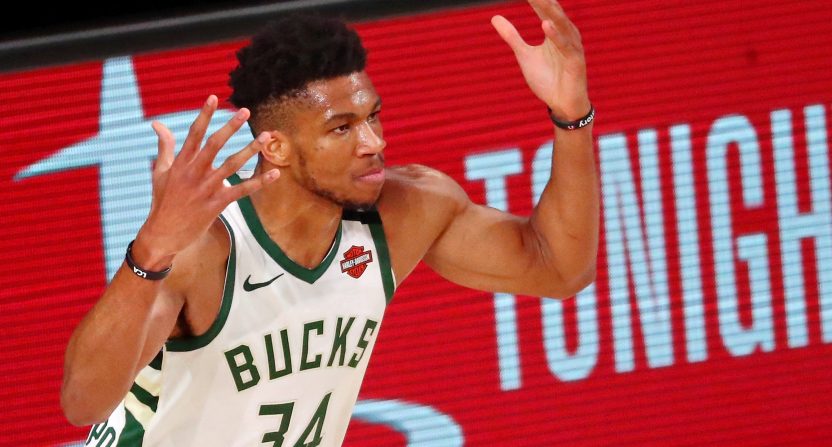 LeBron James left Cleveland (twice). Kevin Durant bolted from Oklahoma City. Anthony Davis forced his way out of New Orleans. Will Giannis Antetokounmpo be the next NBA superstar to go?

The clock began ticking on Giannis and the Milwaukee Bucks the minute they were eliminated from the playoffs. Every team will be watching closely because Antetokounmpo could shift the balance of power in the NBA.

There’s the growing speculation that Antetokounmpo will be in play. Unless he signs a contract extension, the Greek Freak will hit free agency next summer. Antetokounmpo says he won’t ask for a trade, and the Bucks reportedly will not trade the reigning MVP.

Both sides might feel that way today. However, a lot can change between now and 2021.

Milwaukee’s biggest advantage: the Bucks can offer Antetokounmpo the most money. A supermax extension would reportedly be worth roughly $250 million over five years. That’s significant, especially during these challenging financial times. Also, Bucks ownership said that they are willing to spend into the luxury tax.

Whatever happens, Milwaukee must know Antetokounmpo’s intentions. The Bucks cannot afford to lose him for nothing.

When LeBron left Cleveland the first time, the Cavaliers plummeted from an NBA-best 61-21 in 2009-10 to an NBA-worst 19-63 in 2010-11. When Durant exited from Oklahoma City, the Thunder went from almost upsetting the 73-win Golden State Warriors in the 2016 Western Conference Finals to being eliminated in the first round of the 2017 playoffs.

If Milwaukee discovers that there’s no chance Antetokounmpo will re-sign, the Bucks must consider trading him. They can look to the New Orleans Pelicans for inspiration. New Orleans dealt Anthony Davis and got a decent haul for him from the Lakers, including Brandon Ingram who developed into an All-Star. The future looks bright with Ingram and Zion Williamson.

But let’s take Antetokounmpo and the Bucks at their word. Let’s say Milwaukee is all in for next season: championship or bust. That’s probably what it’s going to take to convince Antetokounmpo to stay. Bucks management said that Mike Budenholzer will remain as coach. Budenholzer has won 60 games with two different franchises (Atlanta and Milwaukee) and led both to the Eastern Conference Finals. He’s a two-time Coach of the Year. This year, the Bucks crushed people during the regular season. Their scoring margin (+10.1) was one of the best in NBA history.

But Budenholzer also was clearly outcoached by Erik Spoelstra. Milwaukee put up little resistance in a 5-game second-round loss to Miami. Yes, Antetokounmpo missed Game 5 due to an ankle injury, but the Bucks suffered two double-digit losses in the first three games with Antetokounmpo.

Milwaukee must wonder if Budenholzer is the right guy. Can the team upgrade? The Bucks also needs a better point guard who can get Antetokounmpo the ball in the halfcourt. They made a huge mistake by letting Malcolm Brogdon walk rather than pay the luxury tax.

The best option would be acquiring Chris Paul. His game would be a perfect fit. Paul is 35, but he shot 48.9 percent for Oklahoma City, the third-best figure of his career. And the rebuilding Thunder might be inclined to move on, especially after parting ways with Billy Donovan as coach. Now, does Milwaukee have enough assets to make a trade work? That’s another story. But getting Paul would signal to Antetokounmpo a clear commitment to winning.

Other point guard options could be free agents Fred VanVleet and Goran Dragić. Those guys, however, might be out of Milwaukee’s price range.

Of course, Milwaukee could make all the right moves and still lose Antetokounmpo.  Giannis has the leverage. He might decide, like LeBron and Durant before him, that he needs to go to win a championship.

The betting favorite to be Giannis’ next team is Miami. The Heat have the salary cap room and a proven track record for success. Pat Riley, with substantial help from Dwyane Wade, convinced LeBron to come to Miami and won two NBA titles. Plus, Miami already has a strong base of young players who have overachieved to reach the Eastern Conference Finals, which you can bet on at www.888sport.com/.

Toronto, Golden State. and Dallas are also rumored to be in the mix. Toronto and Golden State already have proven they can add a big-name star and win a championship. Dallas has the most exciting young player in the league in Luka Doncic. (A pick-and-roll combination of  Doncic and Antetokounmpo would be lethal.)

Giannis’ free agency would be like nothing we’ve seen since The Decision in 2010. LeBron said: “I’m going to take my talents to South Beach and join the Miami Heat.” Wherever Giannis takes his talents, it could have a similar ripple effect.

The clock is ticking.