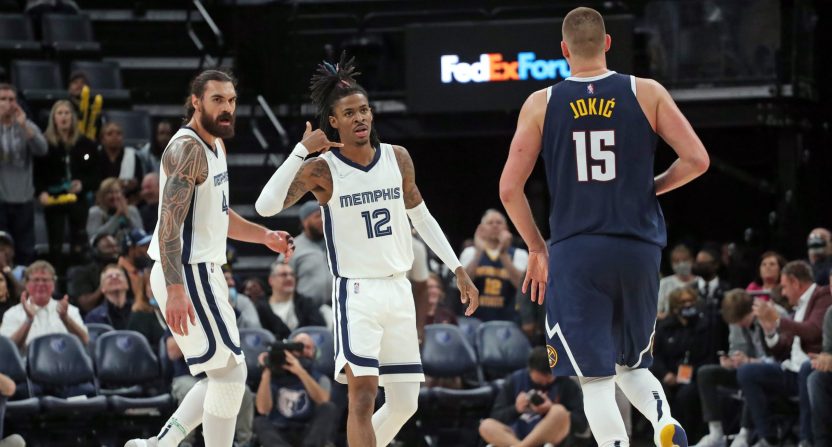 The NBA standings are a bit of a mess at this point in the season. All of the COVID outbreaks have muddled things to the point that it’s more useful to just wait it out — we’ll know more about how everything will shake out later.

One thing we do know, however, is that the West is looking like the lesser conference. This development would have been impossible to expect four years ago. The East is now the better conference, with a better and deeper collection of top teams. Outside of the clear West favorites (the Golden State Warriors, Phoenix Suns, and Utah Jazz), it’s hard to determine which teams are for real.

Let’s check in on the four teams directly below the West’s top three. Is anyone actually good?

The Grizzlies started the season cooking on the back of a ferocious Ja Morant start, and kept it up even after Morant went down, relying on their depth to stay afloat. Now that Morant is back, they’re still winning games, including seven of their last 10. They’re a well-constructed, well-functioning team with lots of useful pieces.

They’re at least a year or two away from a higher level of contention, but they’re not an easy team to beat. Morant has answers to every defense and knows how to keep the offense functioning. He makes early passes and plays off the ball, taking over when necessary with precocious finishing at the rim and a wide repertoire of floaters (and: 40 percent from three!) He makes some ridiculous passes:

The pieces around him are coalescing. Desmond Bane is one of the most underrated players in the league; he’s a deadly sharpshooter and solid perimeter defender who’s showing more and more ability to create off the dribble within the flow of the offense. He’s an ideal piece next to Morant and Jaren Jackson Jr.

Something to watch: the Grizzlies’ development on defense, particularly when Jackson plays center. Morant struggles on that end. There’s a lot of promise in playing Jackson at the five; so far, the numbers are neutral: in the 443 minutes that Jackson has played without Steven Adams, the Grizzlies have a plus-0.97 net rating.

The injuries have been tough to watch for Denver, which remains the Nikola Jokic show. With a skeleton crew around the star center, the Nuggets rely an almost unprecedented amount on Jokic. They’re plus-9 with him on the court and minus-13 without him.

You never know what you’re going to get from the supporting cast. Aaron Gordon has been playing outstanding defense, taking on the opposing top scorer every night, but he isn’t an effective second option on offense. Austin Rivers has had a rough campaign, with an effective field goal percentage of just 48 percent. Monte Morris is more of a spot-up shooter type with a little bit of facilitating ability, and Jeff Green is a gap-filler — better suited to play around stars.

Some nights, they rely a lot on Facundo Campazzo, the undersized point guard with unlimited creativity. His shooting isn’t always there, but he does fun stuff every night. Just look at this absurd play:

Jamal Murray is on his way back. Denver has role players who can defend and shoot. Depending on how soon Murray returns to something close to full form, look out for the Nuggets.

The Mavericks dealt admirably with a COVID outbreak that took out a number of their top players, including Luka Doncic. They’re now close to fully healthy apart from Kristaps Porzingis, who remains in the health and safety protocols. This year overall hasn’t been smooth sailing for the Mavs, whose offense has plummeted to 17th in the league as they adjust to Jason Kidd’s coaching.

Doncic, despite a slower start possibly caused by a lack of conditioning, remains a constant stream of offense. His pick-and-rolls create good shots most of the time. Doncic is one of the best decision-makers in the NBA, so even though he has struggled to get downhill consistently (which has caused his dip in scoring and efficiency), he still ensures that the Mavs are getting good scoring opportunities.

His supporting cast seems to be wearing thin, though. The Mavs could use a higher-caliber lob threat and rim finisher at center — imagine a Clint Capela or Jarrett Allen next to him. They rely a lot on the shooting of the streaky Tim Hardaway Jr. (who’s now been moved to the bench) and the three-and-D skillsets of Dorian Finney-Smith and Maxi Kleber. Porzingis has been legitimately good this season as a second option, but the main reason has been his improvement as a post-up player, which has the unfortunate knock-on effect of clogging Doncic’s driving lanes.

Kidd recently made an important lineup decision that could go a long way in determining the ceiling of this Mavs team as constructed: he inserted Jalen Brunson into the starting lineup. Brunson has simply been too good in his sixth-man role (and then in his role as the Mavs’ lifeboat when Doncic was out) to come off the bench.

Starting Brunson gives Dallas the off-the-dribble verve that they have always lacked next to Doncic. Brunson is a playmaker and shot-creator who can do productive stuff with the ball, easing Doncic’s load. With Doncic, Porzingis, and Brunson in the starting lineup, the Mavs could potentially be a very dangerous offense. Brunson attacking closeouts generated by Doncic’s expert playmaking is a scary thought for opposing teams.

But Brunson needs the ball. Is Kidd going to mix in Brunson pick-and-rolls when Doncic is on the floor? What will Doncic be doing when Brunson has the ball? At this point, we’ve learned that pretty much any time the Mavs are doing anything other than running the offense through Doncic, the possession is not being maximized.

Ultimately, though, the Mavericks will be at their best as a multi-dimensional threat. In the playoffs, while Doncic is clearly capable of being superman and dragging the Mavs to something greater than they should be, his life would be easier if he didn’t have to do absolutely everything all the time. And playing off the ball, within the flow of a well-functioning offense, could serve him well. He could cut, shoot off the catch, or attack closeouts. This would also help him conserve more energy for defense.

It will be interesting to watch how long Kidd sticks with the Doncic-Brunson starting lineup pairing. There’s real potential to be mined there.

Somehow, the Lakers are still here. Their season has been a bit of a mess, with so many different players and starting lineups. The Russell Westbrook rollercoaster ride has been at its windiest and twistiest this season. LeBron James, in a tradition as old as time, has been forced to carry a massive load to lift up a flawed group of players.

And this group is flawed. It’s hard to overstate how poorly this roster has been put together. The Lakers as a franchise were gifted LeBron and Anthony Davis, a Kobe-Shaq-level duo, and gradually squandered it by putting the worst collection of players around them possible.

LA sabotaged themselves for many early-season games by playing DeAndre Jordan and Dwight Howard heavy minutes, a disastrous decision that cramped spacing. Both Jordan and Howard — who played poorly — are out of the rotation, and with Davis hurt, LeBron is now playing center. It has worked well! LeBron is looking spry, pouring in points at an MVP-level while running the offense and directing traffic on defense. Westbrook has shown stretches in which he’s limited his destructive tendencies and fit more effectively in a spaced offense.

It’s still very hard to figure out the ceiling of this team. The role players are limited. Malik Monk has shown a lot of offensive promise as a well-rounded sharpshooter, but he’s a liability on defense. Carmelo Anthony is making shots, but he gets ruthlessly attacked on defense, especially against good teams. Stanley Johnson has been a revelation on his 10-day hardship contract, but he’s all-defense, no offense.

Due to the horrid construction of this roster, they don’t have many avenues for improvement. They want players like Jerami Grant and Myles Turner, but it’s unclear why the Pistons or Pacers would be interested in a package of Talen Horton-Tucker, Kendrick Nunn, and a 2027 first-round pick. That’s all the Lakers have to offer. Horton-Tucker has massively struggled and Nunn hasn’t played all year.

LA will also run into the inevitable Westbrook question: how much can a team actually win with him on the team? His bad habits — including poor shot selection, troublesome offensive decision-making, and lazy defense — have a long and well-documented history of continuing into the postseason. He also cramps LeBron’s space and takes the ball out of his hands. He has only made LeBron’s job harder this season, the opposite of what Rob Pelinka and the Lakers’ front office (plus LeBron) hoped.

Westbrook’s trade market is pretty barren due to his contract. The Lakers’ only hope for a championship is the pure dominance of LeBron and AD. The front office needs to find the optimal lineup that will get out of their way. A championship is still probably a long shot, but we’ve seen that duo find a way before.