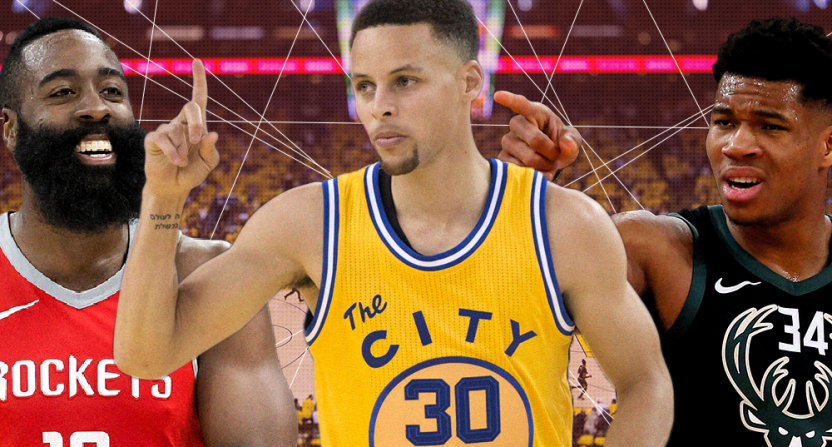 The past four NBA Finals have produced largely predictable results. Stephen Curry and the Golden State Warriors have met LeBron James and the Cleveland Cavaliers for four consecutive seasons, with the Warriors winning three of the four matchups. This year, the finals will feature at least one new team. LeBron left the Cavaliers (who promptly went 19-63 and missed the playoffs) for the Los Angeles Lakers, while the Milwaukee Bucks, Toronto Raptors, and Philadelphia 76ers emerged as the top threats in the Eastern Conference. With the big changes out east, there are some intriguing possibilities for which teams will face off for the NBA Championship. Here are the most exciting potential matchups.

There is nothing more exciting in pro sports than watching the best teams with the game’s top players duking it out in a seven-game series. The Bucks and Warriors look like a great matchup for NBA fans.

Milwaukee and Golden State finished with the best records in their respective conferences, going 60-22 and 57-25 respectively. Both have an impressive mix of star talent throughout their rosters and feature one of the three best players in the NBA. The Bucks are led by MVP-candidate Giannis Antetokounmpo, a freak athlete who makes the exceptional look easy on a regular basis. He averaged 27.7 points, 12.5 rebounds, 5.9 assists and 1.5 blocks per game. Antetokounmpo’s insane length and reach make him the game’s most exciting individual player.

The Warriors, meanwhile, are the best team in basketball. Despite finishing with three fewer wins than the Bucks, no team is more exciting than Golden State when they are firing on all cylinders. Steph Curry, Kevin Durant, Draymond Green, and Klay Thompson are unstoppable when playing their best. They are a cohesive, talented group that can score a ton of points quickly and make blowouts happen in the blink of an eye. Milwaukee would not be an easy out for the Warriors, however. Antetokounmpo, Brook Lopez, Khris Middleton, Eric Bledsoe and the rest of the Bucks along with coach Mike Budenholzer are built to win in the modern NBA.

With LeBron departing the East, the Warriors need a new rival. The Bucks are built for the biggest fight against the NBA’s top team. A seven-game series would be phenomenal.

Toronto making the NBA Finals might seem unlikely given the team’s history in the playoffs, but if the Kawhi Leonard-led Raptors managed to get there, it would be incredible for the game of basketball. Toronto has one of the loudest buildings in the NBA. The fans are extremely passionate about the team, and much of Canada is behind them. It would be awesome to see that kind of support in the NBA Finals.

On a basketball level, Toronto is as well-equipped to deal with Golden State as pretty much any team can be. The Raptors won the season series 2-0, and at the very least, proved they can hang with the Western powerhouse. With Leonard, Pascal Siakam, Marc Gasol, Kyle Lowry, and Danny Green, they have a decent defensive matchup against the unstoppable Warriors offense.

Moreover, Leonard has an amazing track record in the playoffs, winning the title and NBA Finals MVP in 2014. Toronto finally has their star playoff performer, but the question is whether the rest of the team can rise to his level. Internally, players need to get over past playoff demons to get to the finals. But at least LeBron can’t stop them this time.

After good Raptors teams have failed to live up to expectations, getting perhaps the best version of the team ever into the NBA Finals would end the ‘choke’ narrative and give Toronto the respect they desperately crave. It would also help Toronto’s chances of re-signing Leonard. Most importantly for NBA fans, the Raptors making the finals would guarantee one hell of a series.

The Sixers would also be a great matchup against the Warriors just from a pure talent standpoint.

Philadelphia is loaded with good, young star players. Joel Embiid is the most dominant big man in the NBA. He is extremely mobile despite his 7’0″ size, can shoot the ball from anywhere on the floor, and can beat defenders in a variety of ways. Defensively, he’s a monster. Ben Simmons is also a gifted talent whose 6’10” size creates matchup nightmares for other teams. While he can’t shoot, he is a force in the paint and on the fast break. Throw in the talents of Tobias Harris, J.J. Redick, and Jimmy Butler, and Philadelphia is absolutely loaded and good enough to have a competitive series against Golden State. For whatever depth the Sixers lack, the starters make up for it in skill, size, and potential.

A Finals trip would prove the Sixers rebuild, aka ‘The Process,’ was well worth all the losing. The city of Philadelphia would go nuts to see this team in the Finals, and usher in a new era as championship contenders.

Houston Rockets vs the Milwaukee Bucks

It is difficult to imagine a scenario where the Golden State Warriors do not make the NBA Finals, but if any team is going to give them a run for their money in the Western Conference Finals, it will be the Houston Rockets.

The Rockets nearly eliminated the Warriors last year, going up 3-2 before Chris Paul went down in game five along with Houston’s chances at making the NBA Finals. In 2018-19, the Rockets are healthy and surely eager to prove that they can beat Golden State in a head-to-head matchup. James Harden upped his scoring average by nearly 6 points from one season ago to a robust 36.1 point per game average. He has got a shot at his second consecutive MVP award. Paul, Eric Gordon, Clint Capela, and P.J. Tucker are all healthy. If Houston can stay off the IR, they will be a tough matchup for the Warriors in the Western Conference Semifinals.

Seeing two of the top MVP Candidates in Harden and Antetokounmpo face off for the title would be exciting and a nice change of pace for the league. It is a long-shot scenario, but not outside the realm of possibilities.